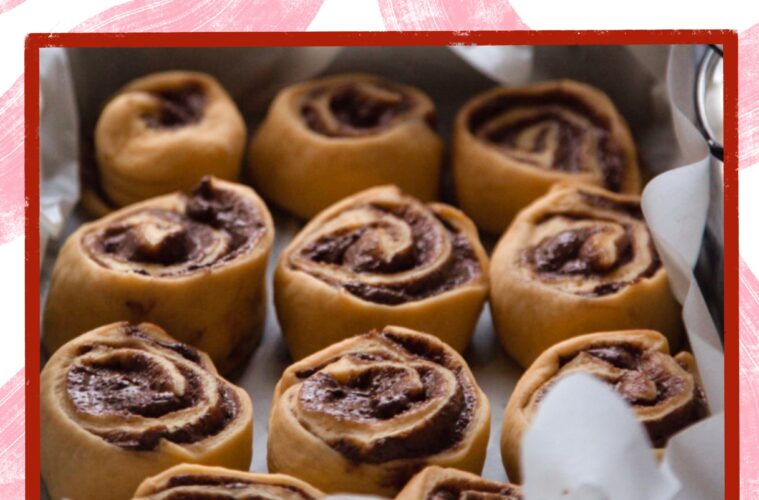 Stuck at home, with a lot of time on their hands, as social activities are still mostly on hold, Bori and Luca have been testing autumn recipes and have collected their seasonal favourites for you.

I am usually quite vary of Instagram-recipes, just as with everything else I see on the social media platform. Having tried tons of recipes from Tasty, with a very low success rate, I try to stick to reliable recipe websites. However, when I came across this cookie recipe by The First Year and saw the gooey caramel middle, I knew I could not not try it.

Although, I have to say, that I had to modify this recipe slightly, as living in the UK I didn’t have access to the instant cider mix referenced in the recipe. If you can get it, great, if not, just buy some apple juice, and boil half a cup in a small pan. Once it evaporates a bit, mix in some of the sugar until it dissolves, and add to the dough mix. I used the cinnamon-sugar mix to roll the cookies in.

The reason I love popcorn is because it can be made super quickly, and also can be flavoured in so many different ways! Despite the convenience of the pre-packaged microwavable popcorn, I usually get a big bag of unpopped corn, as it’s much cheaper and gives you more room to play around with the flavours. You can prepare it by putting a pot on medium-high heat with some neutral oil (make sure the pan is big enough for the corn to pop). Put in 2-3 test kernels and wait til they pop, take them out and put the rest in (I usually use ¼ cup of corn) and cover the pot. Once you hear the 3 sec silences between corns popping, take it off the heat, season and eat.

For the caramel flavoured version, make the caramel first (basic recipe can be found here). Once it’s done, start the popcorn making process: when the first few test corns are popped, dip them into your caramel and put on a tray covered with baking paper and let it cool down. Based on your test corns, you can adjust the consistency of the caramel – add more sugar if you want it to be more solid, or more butter and cream if you want it to be softer.

Once your corn popped, pour your caramel into the pot with the popcorn, and mix it with a wooden/plastic spatula rigorously. Once mixed, spread it out on the tray, and let it cool for a few minutes before you dig into it.

What’s better on a rainy Sunday afternoon than baking a batch of Chai-spiced cookies? I’m a big advocate for Chai lattes and miss them dearly as I haven’t attempted to recreate one at home — slightly ironic that I baked cookies sooner. Anyhow, Adrianna’s A Cozy Kitchen has been one of my favorite food blogs for years, and three out of the four recipes I tried for this collection belong to her. These cookies are a bite of autumn heaven: they are crispy at the edges, chewy on the inside, so, so warm and spicy. I topped them with a hint of freshly ground salt when I pulled the tray out of the oven for the perfect sweet and salty contrast. Do bear in mind that the softer your dough, the more the cookies will spread, so add some flour if your dough won’t behave for some thicker cookies.

I’m cheating with the name as I used chocolate ganache and a cheap, not palm-oil based hazelnut spread instead, but we get the gist. I love working with yeast. The scent? Unparalleled. I haven’t made babka before and I was surprised at the difference in the dough compared to rolls and twists: it was softer, more malleable, and smelled heavenly (I put a teaspoon of cinnamon in the dough, which isn’t included in the original recipe, but I do recommend it for the extra warmth). The recipe also calls for one rise, but the second batch (it makes two loaves) had a second rise as I only had one tin, and it came out better, so I’m voting for that second rise. Even ten minutes in a warm environment can do wonders. If you’re baking alone, please be careful when transferring the braided babka into the tin: I almost dropped it, and my heart did skip a beat.

Feeling like I mastered cinnamon rolls, I set out for a challenge with these chocolate cardamom rolls. Cardamom was a bit harder to find, at least here in Hungary, so they’re less of an impulse bake. The spread needs to be quite thick; I put some dark cocoa in mine both for the taste and the colour. It’s a two-rise recipe so it technically takes a few hours, but you don’t have to guard the dough. My advice is: fill a bowl (that comes with a lid) with hot water, cover with the lid, place your bowl with the dough on top and cover it. This fastens the first rise!

Why is there a lonely cookie in this pic, you ask? Well, I made a big batch and I only left one home for photography purposes. The rest came to office with me and were quite the success. (I was told to keep up the test-baking for Lazy recipes as long as I wish, lol.) The secret of a thick cookie is frankly: the freezer. At least an hour, but you can freeze the dough for later use as well. As my friend said, these have a “solid chocolate to dough ratio”. You’ve been warned.