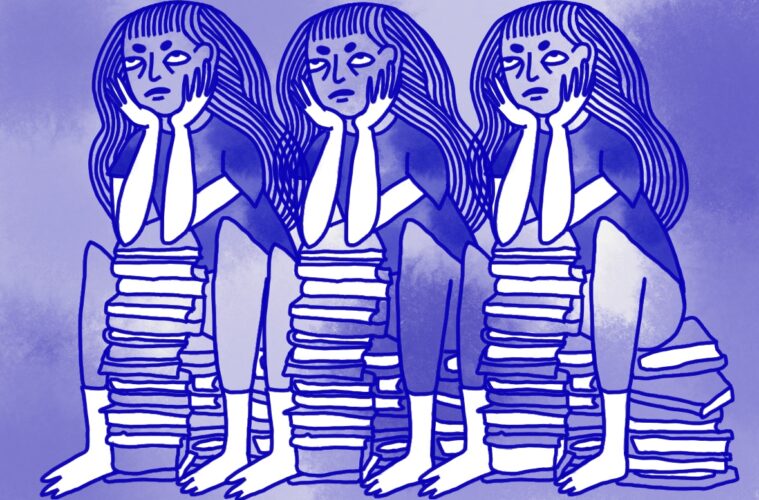 One of my first “serious” attempts at writing contradicts what I have spent most of my adult life advocating for. I found it in an old notebook, the kind of self-conscious journal that teenagers keep. Though addressed to no one in particular, the writing was stilted. Unnatural. A performance for some future audience, by which time the words would be endowed with new meaning, appropriate for someone destined to be great. It went something like this:

She had eyes that looked too far and thoughts that strayed beyond the edges of the world. But that pleasantness acted as an apology for her complex disposition. She sobbed or flew into rages at the slightest provocation; she swooned at the sight of new growth in the spring. Her beauty was a warning.

We immediately identify the beautiful-woman-as-inscrutable-object—although I would not learn about this trope for years. There is an explicit link between the female, the beautiful and the unstable as if one quality gives relevance to and amplifies the others. Outward beauty acts as a lacquer, obscuring the dangerous things (what kinds of things?) that lurk beneath. The narrator leaves us with a question: Are the aesthetic pleasures of female beauty worth the attendant pain?

In my desire to be a Great Writer, teenage me imitated how I thought writers wrote about women. Even my favorite female author at the time—Jane Austen (surprise!)—mollified her protagonists by making them beautiful, rich, and by the end of the novel, married to the rich (and often beautiful) guy. Re-reading my journal, I was frustrated by my inability to imagine women as anything other than pretty, dangerous and slightly unhinged. The unconscious acceptance of a conception of and about women that is aesthetic but vacuous. The uncritical affirmation that such an approach to women and femininity is part of the alloy that makes Great Literature.

Contemporary me cringes. Most of us know that adolescent sensibility doesn’t age well (or so we mutter, slamming shut old notebooks and shoving them to the bottom of the closet). Teenage writing doesn’t hold a mirror to our younger selves, we might argue. We are still “becoming” ourselves, and therefore we can’t be held accountable for our mistakes. It’s not clear when exactly we finish this business of “becoming”—that is, when we are, fully and authentically, “ourselves”. Assuming that we are our own best judges. That we are able (or want) to separate our perceptions and ideas from those constantly hurled at us by our cultures, friends, families and historical moments—and that by virtue of this separation, our judgment becomes more valuable.

I have my doubts.

So I’ll let you be my judge: is teenage me off the hook for appreciating certain aesthetic effects of sexism in literature? For writing in a way that would incur Twitter scorn these days? I could point fingers at the books I grew up reading, the so-called Western Canon—a list of “classics” that define the estimations of culture, value and art in the West—for being too pale, male and stale. But that would imply that I had no participation in or control over what I read or wrote, which in turn would go against one of the tenets of being a Good Feminist (a later self that I would try on): the idea that women are smart and see through the bullshit and would piously go around righting the wrongs of the world if only men would stop getting in our way.

Before college, I rarely thought about myself in the abstract, even though I thought about myself all of the time (are my side bangs still in? are my friends hanging out without me? when did I spill sauce on my shirt?). My characters tended to suffer from similar afflictions: an inflated sense of self-importance, an uncanny ability to always be right, an impulse to interpret everyday actions as intentional slights. We, my heroines and I represented the cumulation of our experiences. We rode a progress narrative over the daily bumps and potholes, knowing that the light was always green in the end—that we would climb, ever upwards, towards that great destiny that was waiting for us: selfhood. We could “go through a phase” and “experiment” without fundamentally changing who we were because programmed into our DNA was that glorious destination.

Have you ever wished you could stop being yourself, be someone else, try something completely different from your lived experience?

In short, I read and write to think more thoughts. I see some of you shifting uncomfortably. Maybe it’s different for you (and if so, I envy you… but me, I need help). For me, reading and writing—and specifically, reading and writing literature—force me to confront ideas. All sorts of ideas, including ideas that I strongly disagree with, or wouldn’t otherwise entertain, or could never have imagined without the help of words on the page. For instance, books in which women are little more than sexy plot devices aren’t usually the first ones I reach for. They often prompt me to send enraged texts to friends, in which I thoroughly shit on the writer and his—or sometimes her, but it’s often a dude’s—depressing inability to portray, or even understand, women.

What explains why I return to some of those same authors, again and again, even when I know they just don’t get women? If not for that confrontation with ideas that make me boil, with the necessity to more clearly examine and articulate what I do believe, in the face of beliefs I definitely don’t support?

Whether one is able to separate sexist and literary effects of a book likely depends on the person, and “success” (if we call it that) is mediated by the effects sought from the experience of reading. For me, there is no appeal in trying to dissect sexist literature and keep only the parts that are pleasing. There is only censorship (and historical specters) to be gained from boycotting “offensive” books. Let’s be clear: sexism “offends”, but so does the dogmatic rejection of anything that deviates from our ideological beliefs. To engage with an opposing idea does not imply its condonation. Rather, this engagement requires familiarity with oneself and one’s values, as well as a certain amount of courage to hold up these precious parts of ourselves for inspection.

The teenage promise I made to write every day, carefully pencilled into the first page of my notebook, was quickly abandoned. The differences among my journal entries scared me a little as if each page were written by someone new. I think that fear reflected my uncertainties about who I wanted to become, as well as my anxiety about having to choose a single self to be.

Part of me still feels bound by expectations—particularly relating to gender expectations and some annoying desire to conform to the image of the Progressive Millennial Woman. Can a PMW genuinely enjoy reading Dostoyevsky, despite his painfully unimaginative portrayals of women? This PMW doesn’t, particularly. Or can she only smirk at his formulaic woman-as-universal-object-of-desire, femme fatale, havoc-wreaker-in-chief, before feeling obligated to explain that her pleasure is actually a reclamation of the expression of “sexist” concepts? Do all facets of Good Feminist personalities point towards that holy grail of gender equality? Are we cerebral creatures all ultimately trapped within the pleasure principle?

I don’t want to be stuck just being myself.

Whatever it is, being only oneself feels confining. I’d rather scatter my many selves, like seeds on the wind, blooming wherever my flowers take root.