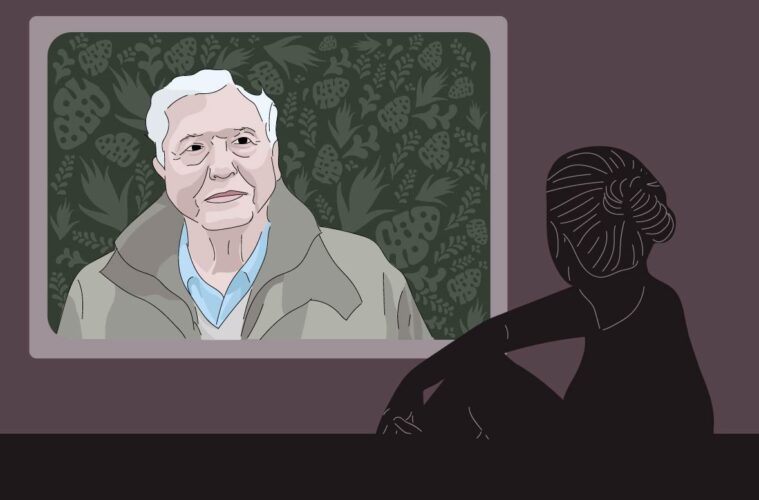 Despite knowing that the documentary “Life on Our Planet” was a must-watch, I was hesitant to watch it because I knew it would probably make me sad, upset, and anxious. And although I was partly right, I am still sitting in front of my computer, writing this review, and highly recommending you this stunning creation, because every second of it is worth watching. The concept of the film is to show us how we have transformed our environment, what (negative) impact we, humans have on Earth, and how we can move towards a sustainable, better lifestyle for the whole planet.

The documentary’s opening scene shows us Sir David Attenborough standing in an abandoned building in the heart of a once vibrant city which became uninhabitable due to human negligence: Chernobyl.

The whole film focuses on climate change and how it reached the current state of emergency. It presents the changes that have taken place in nature over Attenborough’s 60-year career. As we have become accustomed to from the naturalist, a beautiful pictorial world unfolds before us while watching the film – thanks to the directors, Alastair Fothergill, Jonnie Hughes, and Keith Scholey – showing us how breathtaking and unique our planet is. Watching the documentary, we can follow the naturalist’s life, his career, and in parallel, the change of the planet in the last nearly one decade.

According to Attenborough, in the history of Earth, there were five mass extinctions on the planet until now, the last one being the extinction of dinosaurs. With dinosaurs disappearing,  75% of the Earth’s population was gone and nature had to rebuild itself. And it did, actually quite well. As a result, the planet entered one of its most stable periods almost 12 000 years ago that scientists call Holocene. This stability could only develop only due to the rich and thriving wildlife around us. For these more than 10 000 years the planet’s average temperature has not wavered up or down by more than one degree Celsius. How is this possible? Every living creature on Earth is in connection with each other; the phytoplankton in our oceans and the forests in the north have helped the atmosphere by locking away carbon, herds on the plain keep the grasslands rich and productive by fertilizing the soils, and mangroves and coral reefs work as nurseries for many fish species. Rainforests function as the lung of Earth by capturing the sun’s energy and adding oxygen and moisture to the planet’s air currents, and the polar ice reflects the sun’s rays and cools down the planet. Everything happens for a reason, every species has its purpose, no one is useless. Though humans could only evolve to the current stage of humanity as a result of this stability and biodiversity, the documentary shows us the negative impact of human activity on Earth.

The darkest and heaviest part of the film – besides when we see what we already destroyed – is definitely when we are shown the future that we have to face if we don’t make any changes in our habits: the sixth mass extinction. Being in his 90s, Attenborough won’t experience most of the disasters that many of us will have to. And yet, he shows us small examples from all around the world, which can fill us with hope: there is a possibility for a brighter future.

Although I felt relief after having been presented with a glimpse of hope, it also made me think. If the documentary’s goal is not only to change the way we see our future but also to encourage us to act, I’m not sure the message came across strongly enough, given the state of emergency we are currently in.

Maybe you and I, as individuals, will act more environmentally friendly after watching this documentary, but will it change the mindset of the politicians, multinational firm and corporation leaders?

According to present understanding, if we do not act quickly, it will have fatal consequences. So it’s time to open the eyes of as many people as possible to the truth and spur our leaders into action.

The documentary ends at the same place it began; Chernobyl. But in contrast to what was seen at the beginning of the film, the cameramen reveal to us how buzzing and full of wildlife the territory turned into during the last 34 years. Nature found its way back to this city and completely occupied it by now.

As Attenborough said: “There are many differences between humans and the rest of the species on Earth, but one that has been expressed is that we alone are able to imagine the future.” The future I imagined resembles the one Attenborough shows us in his documentary: an outcome of what happens if we do not change our behaviour. But watching this film also made me realise that there are two sides of the same coin: we can make a change and it’s not too late to act. Every time making a purchase, you as a consumer buy into a certain vision of the future. Choosing a more sustainable brand, eating less meat, supporting local producers, buying zero-waste products can all make a significant change. A good example is how many meat-producing plants started to deliver plant-based products too, as a result of the increased consumer demand.

Attenborough’s documentary highlights our past and present mistakes and its possible consequences, as well as the way we can make changes towards a more sustainable future. Although it’s definitely not the easiest topic, it’s an absolute must-watch for everyone.