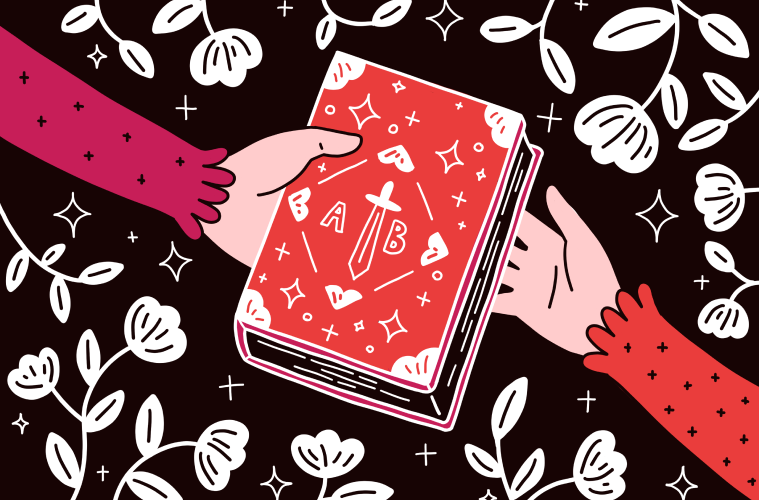 “Recovering the voices of women, erased from history” – Interview with historian, Kate McCaffrey

A new discovery, made by historian Kate McCaffrey has shed light on the companionship and bravery of a few women, who risked everything to preserve and protect the memory of a fallen queen.

The exciting new discoveries were made in the Book of Hours (a personal prayer book, popular in the late Middle Ages) once owned by the ill-fated queen of England, second wife of Henry VIII, Anne Boleyn. Besides Anne’s well-known inscription in the book; “Remember me when you do pray/That hope doth lead from day to day.”, Kate found further inscriptions which had been erased from the book, thus were previously thought to be only smudges on the centuries-old pages.

As part of her MA dissertation, Kate had the opportunity to examine the inscriptions in the book under UV light and she found four family names: Gage, West, Shirley, and Guildford. She found out that the three women and one man to whom the inscriptions belonged, were all relatives of Elizabeth Hill, a childhood friend of Anne Boleyn. Kate believes that the new discovery highlights both the importance of female companionship in an era when women had limited space to express their voice, and the bravery of the (mainly) female supporters of Anne, who took a big risk by preserving the fallen queen’s prayer book.

Studying with Kate at the University of Warwick, and spending three amazing months in Venice, visiting the glorious sites of the Venetian Renaissance together, I have been aware of her passion and enthusiasm for history. It was incredibly interesting to finally ask her, where this enthusiasm came from and go on to discover more about the exciting research she has been conducting for the past year.

Kate McCaffrey with the Book of Hours, Hever Castle

What made you decide to study history on an academic level?

I get my love of history from my mum:

I grew up with stories she would tell my sister and I about strong, powerful, talented women throughout history.

I decided to pursue it on an academic level because of my passion for it, and my curiosity to always want to be studying and learning more. I also like the challenge, although academia can be very stressful, there can also be such a huge sense of achievement.

Have you ever had to deal with questions like “why don’t you study something more practical”?

I have absolutely had to deal with questions like that, I even question myself sometimes. Imposter syndrome is a huge issue, I have often questioned my abilities and compared myself to others and doubted whether I deserved to be there. I think most people in academia could relate to that at some point in their careers, particularly as a young woman. You just have to remind yourself that you have worked incredibly hard to be here and incredibly hard to stay here – you deserve to be there as much as anyone else.

There is also certainly a pressure to feel like your degree/s are leading to something concrete, something “practical”.

But honestly, so far, my study of history has led me to pretty much exactly where I want to be, and although there is pressure and stress, I am absolutely passionate about what I do – and that, to me, is one of the most important things.

Tell us how you became interested and how you started your research in the two Books of Hours, once owned by Anne Boleyn.

I started working at Hever Castle, the childhood home of Anne Boleyn and the current home of two of her Books of Hours, when I was only 16. I continued to work there as a Castle Steward in between studies for the next six years, and so I was always aware of the two Books of Hours and their importance, yet I was never able to handle them myself. I think they are both incredible works, only three books survive today with Anne’s signed notes inside them, and two of them are at Hever. They have always seemed very emotive to me because of their highly personal connections to Anne, as so little of her material legacy survives today. When I realised that I might have the chance to work with the books in person, I jumped at it!

We are talking about one and only manuscripts from the 15-16th century. How did you gain access to them in the first place?

One of the books, the older of the two, is a manuscript from around 1450. The later book is printed, and was produced around the year 1527. Hever are highly, and rightly, protective over the books and so I was only allowed access to them for two reasons: one, my personal connections to the Castle as they knew me well from having worked there for so long, and two, a letter of recommendation from one of my MA tutors, Dr David Rundle, who later supervised my thesis. I had just undertaken courses in Palaeography, Codicology and Latin led by David, and so he was able to reassure Hever that I was now trained to handle their books.

How did you come across the new inscriptions in the book? Were you specifically looking for other writings besides Anne’s famous lines or was it “an accident”?

To be honest, it was a bit of an accident, or as my supervisor said, ‘a moment of serendipity’ – which I think I prefer! I was simply undertaking a close study of the printed book (which is the book where I uncovered new inscriptions) and trying to take a detailed look at each individual page when I noticed blurred smudges with what appeared to be letterforms underneath. Once I realised Hever was not aware of their existence, I continued my study and found three further examples – so, in total, four inscriptions which had later been erased.

You used UV light to examine the erased inscriptions, which you then had to decipher. Were you familiar with all the techniques before or did you have to learn as you went along?

I had never used an ultraviolet light to examine erased inscriptions before, so it was a new experience for me and I was grateful for the support and advice of my university department MEMS (Medieval and Early Modern Studies, at the University of Kent). It was also Canterbury Cathedral’s UV light that I was able to borrow to examine the inscriptions under, so I was grateful to them also! A lot of my experiences with this particular research were new, or fairly new to me and so I learnt an awful lot throughout the process.

The Book of Hours under UV light

How does a researcher keep hopeful during the times when things do not go well? What motivated you to go on with the difficult work, when it seemed like you might not find anything at the end?

I think motivation can be really hard to find at times in study and research, and it was particularly difficult last year as we were in the height of what was then the new COVID-19 pandemic. I know a lot of my coursemates struggled with motivation as well, because so much was going on around us that was spiralling out of control. For me personally, motivation to continue with my work came from a mixture of the simple pressure of deadlines, the prompting of my supervisor, and I also felt a huge duty to the book and its inscriptions.

As silly as that may sound, once I had realised these inscriptions and their authors had been erased from the book’s history, I felt a huge responsibility to whoever these people had been to recover their stories.

I also felt a responsibility to Anne, whose home I had worked in for so long and whose books I was now studying. I wanted to make sure I did everything I could to uncover this part of her book’s history.

You also mentioned before that one of the other difficult parts of the research was to figure out the connection between the owners of the inscriptions and Anne herself. What did you find?

This was definitely something that took me longer to figure out, as I realised the connections between the other owners (the authors of the newly uncovered inscriptions) a while before I realised how they may connect to Anne. The connection I believe comes through a woman, so another female connection, named Elizabeth Hill. Hill was the daughter of Elizabeth Shirley, who was the author of a newly uncovered note in the printed book. Hill was the wife of the serjeant of the king’s cellar during Anne’s time at court and there are several records that suggest that the Hills were close to Anne. Elizabeth Hill also grew up in Sundridge, Kent, so only eight miles from Anne’s childhood home at Hever, so it is possible they knew each other as children.

You talked about how the discovery can shape our perspective on women of 16th century England. Once you started to realize what kind of a story is emerging from your research, did you feel a sense of responsibility to give a part of their missing voice back to those brave women?

Absolutely! Like I mentioned earlier, I felt a real sense of responsibility to the women who had written in Anne’s book after her, and who had kept her book safe.

Protecting Anne’s place in the book and cherishing her memory in this way at a time when her name was disgraced and the king was encouraging her removal from the narrative. I see it as a brave act of female solidarity and community, so I was inspired by that and felt determined to recover their voices and stories.

I see it as if I am just another woman playing her part in the history of this book.

What are your plans now? Is there any chance you’ll return to Venice and we might read something about Venetian Renaissance from you next?

Oh gosh, I would absolutely love to return to Venice soon, and the Venetian Renaissance is obviously such a fascinating subject. However, for now, I have recently returned to Hever Castle as their Assistant Curator so that I can continue the work I have begun with Anne’s Books of Hours, as I am sure there is much more to discover…watch this space! So, I suspect for now, before anything else, I will be returning to Venice in the capacity of a tourist! Although one day I would love to live and study there again.

Is there a book, tv series, magazine, website that you’d recommend to those who would be interested in learning more about Anne Boleyn, Catherine of Aragon or the period itself?

This is a tough one as there are so many amazing and accessible resources now, it is hard to narrow it down! Book wise, for an overview biography of Anne, I think it is hard to go past Eric Ives’ The Life and Death of Anne Boleyn. In terms of a website, the Anne Boleyn Files, run by the historian Claire Ridgway, has just about everything you would need to know about Anne. I would also recommend the amazing Talking Tudors podcast, run by the historian Natalie Grueninger, which has episodes on so many different aspects of sixteenth-century Britain. I recently recorded an episode with Natalie about my own research, so make sure to check that out. I would also mention my own blog (kateemccaffrey.wordpress.com) that I have just started – I will be posting there about my current and future research.

Interview by Lazy Gréti. Check out her other pieces here!

Listen to Kate talk more about her discovery:

Read further about her research:

A Book Fit for Two Queens

Married, child-free and happy: why having children isn’t the “next step”