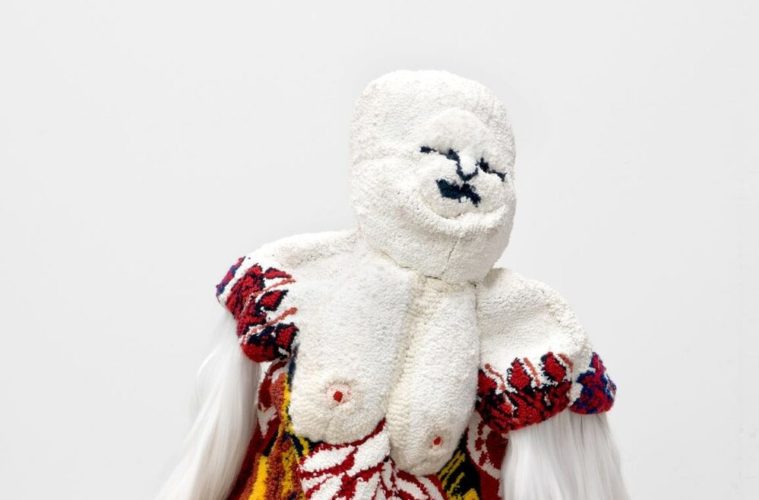 For the April issue of Floorr Magazine, I chatted with Ukrainian-born Anna Perach, who makes performative carpet-sculptures of mythical female characters. In the interview, we spoke about how her work explores Slavic folklore, our co-dependent relationship to myths through western history and our everyday lives, as well as re-narrativizing archetypal “lazy women” known from mythology.

“Myths, whether national or personal, can be almost addictive; we as collectives and individuals often find ourselves in need of them as a reference point for constructing ourselves and our own stories.”

Could you tell us a bit about yourself and your background? Where did you study?

I was born in Ukraine in the later period of the Soviet regime. When I was seven my family and I moved to Israel due to continuous political instability. I grew up in a peripheral city in the south of the country and moved to Jerusalem for my BFA (FA) at Bezalel Academy of Arts and Design. After graduation, I developed an interest in the field of creative work with people challenged by mental health difficulties. This led me to earn a Diploma in Art therapy and Counselling. In 2014, I relocated to the UK where I continued my artistic development in the Masters in Fine Art program at Goldsmiths, University of London.

Are you looking at any national mythologies, folklore or iconographies in particular? What do these mean to you personally?

My practice was always very inspired by Slavic folkloric ornaments and traditions that I was exposed to as a young child. I am often intrigued by the way early unconscious impressions create a longing to re-discover and understand them. Living in Israel where there are a lot of ex-Soviet immigrants I was often identified as “Russian”, which seemed to be a sort of a cultural signifier. Looking into Slavic folklore enabled me to access and take ownership of the cultural ideas that I felt were projected onto me by others. As my practice progressed I became interested in the Jungian notion of archetypes and the repetition of symbolic characters across different cultural mythologies. This enabled me to gain a sense of freedom to incorporate other iconographies while remaining respectful to their origins.

The characters in your works, such as Baba Yaga or Alkonost, are antagonistic, even demonic women, you could almost say the original femme fatales. Their sexuality and femininity are central to determining their narrative – they’re either seductive and thus deadly, or a de-sexed,unattractive and evil old hag, or an innocent, victimized virgin. How are you re-telling the stories of these figures and what role does the performance element in your practice play in their newly embodied agency?

I’m fascinated by the archetype of women as the force that can give and take life. This dichotomy is something most of my characters carry. In the case of Alkonost, she is a young woman that was about to be married and have a family, which is her accepted social role, but then was betrayed by her runaway husband-to-be. After committing suicide due to failing her social role she returns as a temptress whose duces men to have her revenge. She and her sexuality are liberated from social expectations by her death. Baba Yaga is the opposite in the sense that she lives on the outskirts of the forest and does not comply with social norms. She is feared by others due to her choice to live in seclusion and is portrayed as an ugly hag, which could imply she is unwilling to present herself as appealing to the desires of others. She also lives in nature and has control over the elements. When other characters approach her, depending on their honesty and kindness she could present them with fortune (which is really a way of giving them life) or she could extinguish them. To me, she is a depiction of a matriarch. She is self-sustained and powerful. I find this split between the representation of women as an angelic giver of life or a demonic and uncontrolled force of nature to be embedded in social and cultural norms. Through the creation of my characters I give form and claim agency over this narrative as well as suggest its historic legacy. The performative aspect of the practice grew in an organic way from the work. I began with the idea of a mask which is often used in folkloric rituals and was interested in its ability to both hide and reveal aspects of identity. When the performers where the masks I often ask them to embody the character and adhere to its restrictions. I’m interested in the combination of the individual performing and the character. Myths, whether national or personal, can be almost addictive; we as collectives and individuals often find ourselves in need of them as a reference point for constructing ourselves and our own stories.

You make unique carpets through a method called “tufting”- could you talk about what drew you to your medium and its relationship to your subject matter?

Carpets carry a lot of interesting connotations – domesticity, intimacy, labour, beauty (they’re ornamental objects) but also a sense of worldliness and commerce; perhaps even the concrete myth of Odysseus’s wife Penelope making and unmaking her eternally unfinished carpet… I really enjoy the image of Penelope weaving and un-weaving the shroud for Odysseus’s father and find it interesting as a metaphor to the constant retelling of the same story while looking deeper into it with each time. I find that this image could apply to my own practice, restaging my story as a woman, artist, immigrant, mother and many other less clearly articulated identities. My starting point working with craft techniques was thinking about the domestic environment and how it performs as an extension of the self. This led to experiments with hand embroidery, textile and ceramics.

While working with readymade carpets I felt restricted by their imagery as well as concerned by being part of the potentially exploitative industry and decided to take ownership and produce my own carpets. I discovered tufting at Goldsmiths and was excited by the idea that through this medium I don’t only reconstruct an existing tradition but actually continuing it through new thinking. The more I practiced, the more I felt that the technique and material carry without words some of the key themes I’m interested in within my practice including the domestic environment as a carrier of culture and identity, female craft and its place in the artistic hierarchy, and retelling of a folkloric narrative.

You could interpret our relationship to myths as “co-dependent” – we sustain each other, there is an attachment there. Does this notion of co-dependence inform your work in any way, or what do you think about it? Do we make our myths, or do they make us and what’s the role of Art in this dynamic?

I like this question. I think it’s a bit like the egg and the chicken. I think myths and good stories are often very personal but also echo the experiences of others. They help us think of ourselves and understand the forces that act within us. Working as a therapist with children I often see how they play out their thoughts and feelings through games. By doing so they are processing and reliving them in a safe setting. The therapist’s role is to offer mirroring that verbalises unconscious activities. Similarly, archetypes and myths can offer us a mirror to our conditions in life and help process and think of alternatives. Art in that sense is the form through which these narratives are brought to us.

In what ways does your work’s performative language engage with rituals of every day and of contemporary culture? Do you think we are “making” any kind of mythology today and if so, what kind and what are some examples of the kinds of characters it’s creating?

I feel that in our current point in western history rituals and myths are becoming more necessary. Traditionally rituals revolved around major human transitions such as coming of age or getting married. Another role associated with rituals is the connection between people and nature. Abstracting these ideas makes me think about the human desire to experience and process how we change and engage with others. The second part would how we understand and respect what is beyond us. With the ecology being on the verge of collapsing and more people confessing their difficult feeling of social isolation I feel that the mentioned themes are more relevant than ever. Through my performances, I try to invoke these ideas placing the performers in familiar atmospheres such as domestic spaces or a gallery.

Tell us a bit about how you spend your day/studio routine? What is your studio like?

I’m based Deptford, Lewisham and share my studio with one more person. My studio is a bit like my house in the sense that it’s always a work in progress, I quite often move things around, reduce or add more things to try to achieve the ultimate balance of space capacity and cosiness. I normally go there three times a week for about eight hours. Before shows, it becomes more intense and I try to be there as much as I can. I usually begin by putting some music or podcast on before working. Work would be stretching fabric on the net, drawing a part of a pattern, creating a design and beginning tufting. It could also be hand-sewing pieces together, making sketches for upcoming projects, or contacting professionals for potential collaborations. I feel most satisfied when I finish a big piece of tufting or having sewn all the pieces of the new piece together.

Is there anything new and exciting in the pipeline you would like to tell us about?

Well, if we were having this conversation a few weeks ago I would be happy to speak about a few exciting upcoming projects but for the moment everything is delayed and cancelled so I prefer to be careful and not jinx any potential progress in the future.

Interview by Sonja Teszler.
Sonja is a writer, curator and singer based between London and Budapest. She is currently directing the non-profit space Wells Projects in South London and managing the Arts charity Migrate Art, fundraising for select refugee organizations. She is Associate Curator at Kunstraum, contributes to various Arts publications and works on independent curatorial projects internationally. She completed her Master’s at the Sotheby’s Institute London with a research focus on the virtual Avatar.