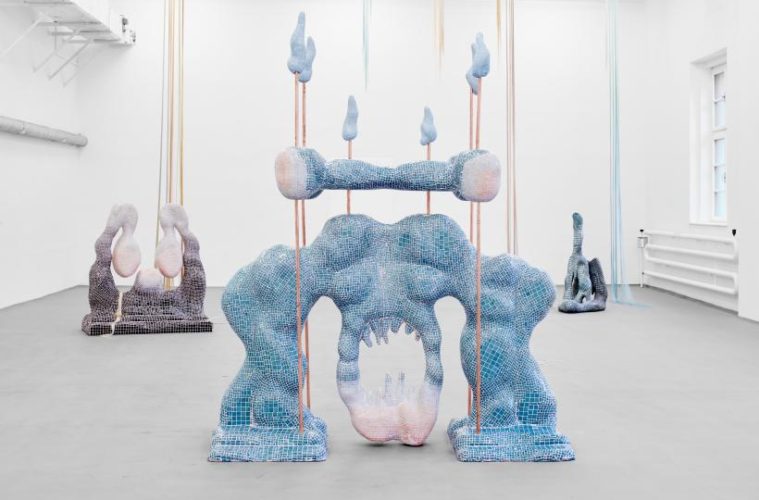 For this recent interview with thisistomorrow magazine, I chatted to Hungarian artist Zsofia Keresztes about her sculptures and installations exploring the body on the axis between the real and the virtual. Experimenting with a wide range of materials such as foam, textiles, rope and mosaic, these seductive, materially pixelated forms reflect relevant themes addressed on Lazy Women such as the (split) Self, identity and empathy in the digital age, as well as her experiences throughout her career with the Eastern European and international art scene.

Hi Zsofia and nice to virtually meet you! Could you first tell me a bit about your background, where you studied and any defining initial experiences you had as an artist?

I studied at the painting department of the Hungarian University of Fine Arts. Before that, in high school, I learned ceramics, and maybe those experiences helped me later to develop my 3D objects so after my graduation from university I started producing only sculptures.

I was pretty sure I wanted to stay in the field of Arts at all costs. However, staying visible on the art scene was very hard in the early years after graduation. Some students were immediately given attention and were granted opportunities working with commercial galleries right after they finished their studies but on the other hand there were other artists who were still waiting to be given some attention from the art world. Me and some of my friends fell into the latter group.

The dynamic of this system can be very odd, a lot of artists I knew who were successful at the start became a bit neglected as time went on. So, early success is certainly not a guarantee for long-term status. The same stands for the future: there is always a possibility for downhills. It’s funny, but with hindsight, I can say that those years of being set aside generated a lot of struggle and frustration but gave me inspiration as well. The desire to prove myself called forth some very fruitful years and gave freedom to experiment as well as full engagement and commitment. During that time, we were working “for the studio”, which fortunately changed, but when my more recent career hustles between tight deadlines I sometimes think back with delight to those more laid-back times. I recall this now because due to the current situation almost all the planned exhibitions are cancelled. So now I can experience that past scenario again.

Particularly in the earlier stages of your career, you showed primarily around Eastern Europe (Hungary, Poland, Czech Republic, Slovakia). How would you describe this scene from an artist’s point of view and in terms of starting a career? Do you see any trends in the arts culture that strike you as different from other international tendencies?

I think that is a general tendency, and it is common for most Hungarian artists to receive their first abroad possibilities in neighbouring Visegrad countries. Obviously, it happens due to the geographical proximity and existing relationships like the granted opportunities and residency programmes between these countries.

I had a duo show ‘Éntomos’ during that time with Anna Hulačová, curated by Sandra Baborovská and my solo show ‘Facing Enemies, Melting Opposites’ curated by Domenico de Chirico, both in Prague. Both were decisive moments and important experiences for me. In terms of artistic trends, naturally, you can still see similarities in the artistic language of post-socialist countries, and you have a feeling of familiarity and mutuality when you visit those countries as a Hungarian. Nevertheless, it seems to me that the emerging artists of the neighbouring, Eastern European countries are starting to fit successfully into the international art scene in their own unique ways.

Next, I’d love to chat a bit about your work, starting perhaps with its relationship to friction and desire. Your anthropomorphic figures and various curved and pointed shapes are coated with a soft, pastel palette, suggesting a reference to the body, as does your occasional use of materials such as hair-like thread or rope. There seems to be an almost fetishistic tension between these fluid figures and their cold, static mosaic shells. Could you share your thoughts on this and on your subjects and themes more broadly?

I want to embrace my sculptures as constantly altering bodies, to capture a fluidity without limits and boundaries. I depict these forms as if they could consume everything all around them through the mirroring surface of the glass mosaic. They can run into one another, consume, destroy and recreate themselves. There is something cannibalistic in this circulation.

Somehow, I am intuitively attracted to organic forms, maybe because they give the illusion of spontaneity while carrying an essentially encoded system inside. I often have a feeling that these prolific bodies grow by themselves as if the materials would have some preordained forms secretly coded within, and I was just conforming to their attitudes. For me, the excavation of these forms is like a kind of autopsy – the shapes bubble over as the insides of mankind.

For me, precision can be very tiring so that is why I like the mosaic as a material. This technique has a strict, logical method to it originally and gives a geometric web pattern to the skin of these wavering bodies. In this way, it helps to visualise an extra dimension in the sculpture which is similar to an unsolvable code. It gives them the illusion of inaccessibility, but at the same time, they can suck anything into themselves through their glossy surface. This quality makes them similar to a totem.

The rope as a material which I also use in my sculptures can refer to dependence and endless interdependence. Just this moment as I am writing this, a movie called ‘The Sphere’ from ‘98 came to my mind. In the plot, the strange events accumulate around a mysterious creature that has similar qualities to those I mentioned above. I really like the mood of that movie.

You often use a mirroring effect with figures in your sculptures – could you talk about this a bit more?

Almost all my work has a characteristic of repetition. It’s essentially a sort of symmetry as if these conjoined forms were Siamese twins. They are the doubles of each other, yet they have their different qualities, small deviations. This kind of fusion can refer to the duplicity of our virtual-actual presence, or how we become the twin of each other in the digital space – how we consume, share information about others and ourselves, and how we melt into a corporate dollop by losing the originator.

You just did a residency with Elijah Wheat in New York culminating in your first solo exhibition in the USA, ‘Glossy Inviolability’, selected to be a part of David Zwirner’s new virtual showroom. Could you talk about this experience, the show and the New York scene, and how they impacted you and your practice?

The residency began with the cooperation between BuBu Exchange Program and the Elijah Wheat Showroom. The programme of BuBu gives an opportunity to Hungarian artists to spend a short time period in the USA, or vice versa. Since I had to produce all the artworks for the exhibition on the spot, I spent most of my time at the studio. Of course, I saw a lot of exhibitions and went to openings, but this short period of time wasn’t enough to get a deeper insight into the local art scene. For me, it was a great challenge working in a totally new and unknown environment. I have a studio in Budapest at AQB Budapest, out of the city centre, which has very good working conditions. I am very used to this space and so it has always been difficult leaving that safe place behind. That is why I felt some uneasiness when it came to residency programmes before – the fear of not being able to create something valuable in an unknown milieu. I now appreciate the time I spent there since I realised that I can bring my ideas into effect in different circumstances as well. Naturally, to achieve this I also needed the help of people there, which I am very thankful for.

The exhibition was made up of four artworks – two wall pieces and a central sculpture piece, and a drawing which became the footstone of the exhibition. In the middle of the space, a monumental woman shaped creature (‘The Failure’) dominates, reminiscent of a conjoined twin couple or of a spider waiting for its prey. Besides reflecting on the hunting instinct, it also shows devotion, laying on two sharp teardrops similar to fakirs laying on their needle bed. She’s trying to seem as if her body was invincible, but her unbearably heavy teardrops smash her limbs and debunk her vulnerability. Around her are spider webs as traps filled with teardrops – the preys (‘Easy Targets, Heavy Bites I.-II’).

This exhibition was somehow the continuation of my solo show ‘Sticky Fragility’, which materialised in 2018 at Gianni Manhattan in Vienna. The topic was the dark side of empathy, about how we can adopt the distress of others through the digital space and the effects of outrageous empathy. The seemingly delicious teardrops stuck into the spider’s web can be as toxic and annihilating as the self-confident, fattened up body of the net, which turns against its own creator. It decapitates the spiders like a guillotine while protecting the teardrops stuck in its own body (‘Distress of the Hunter’).

Where is your base now and how has the quarantine experience been for you in terms of creativity? Anything you’re reading or watching, new habits you’ve gotten into that you’ve found inspiring?

I am based in Budapest and after the opening in New York, I dropped into the quarantine situation in Hungary. Because of the self- isolation, I had to find a technique which I can practice at home, without my studio space. That is how I started drawing just as for many other artists, drawing remained the only solution. Maybe that was the biggest shift during this period, before this time I drew only when I made sketches for my sculptures. From now on I consider these as independent works and I am hoping to exhibit them in my next show.

My new habit is paying more attention to my plants, I take care of them like a fanatic. My first thing to do in the morning is to check all of them what changes they went through. I managed to transform my scrawny houseplants into a little jungle.

What are you working on at the moment? Do you have any projects coming up?

Now that I can get to my studio more and more and things are starting to get back to the way they were before, I’m making sculptures again with a more cruel and rigid use of materials and motifs. I’m working on an installation that resembles the interior of a warehouse that will store cherished grievances, repressed teardrops.

Since I am thinking about a bigger series, I imagined presenting them ideally in a solo show, but it is not organised yet. My group shows for this year are also postponed. I hope sooner or later the time will come to present my works again. Until then I am trying to make the best of my ideas.

Zsófia Keresztes is a Hungarian artist currently working and living in Budapest. Her works have recently been shown in, amongst others, the Elijah Wheat Showroom in New York, the 15th Lyon Biennale, Institut d’art contemporain de Villeurbanne, Trafó Gallery in Budapest, Kunstraum Niederösterreich, Vienna and Carl Kostyál in London. She is represented by Gianni Manhattan in Vienna.

Published on 31 May 2020 through thisistomorrow

Married, child-free and happy: why having children isn’t the “next step”