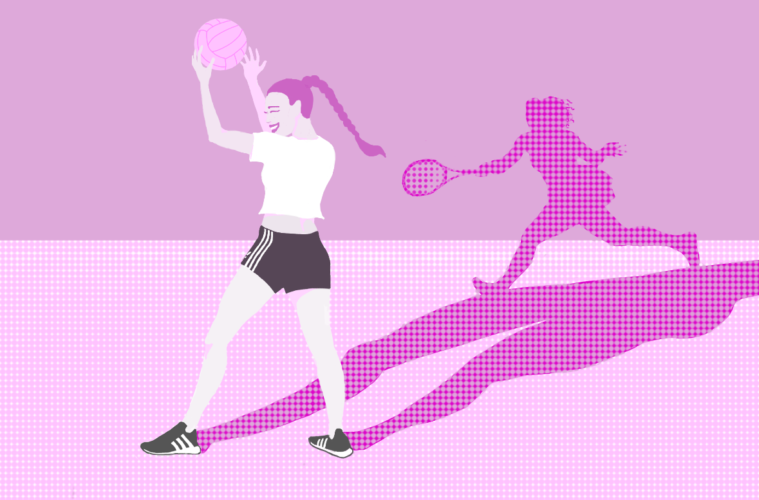 Daring to break into “male territory”: The Image of the Sporty Girl

She runs through the field in super tight Adidas shorts and a pristine white T-shirt, which happens to have your favourite team’s logo on it. Her make-up is perfect and her braided ponytails swish around her face in slow motion as she effortlessly catches the ball. She is fit, she eats healthy, she lets her man watch any game at any time, she can even talk about sports — not like a man, of course, but in such a cute and entertaining way…

You have all seen her. She is the Sporty Girl.

And she doesn’t exist.

But this is the portrait that lives in the heads of (mainly) male screenwriters of mainstream cinema and television.

The Sporty Girl, under the male gaze

What is a real sporty girl like? Can female athletes overcome gender stereotypes and play professional sports under the same expectations as men?

For too long, sports have been the exclusive territory of men. Skills and qualities often praised in athletes are frequently linked to traditionally “masculine” traits: strength, discipline, intelligence. At least, that’s how men have justified their superiority for centuries in history.  What shall be done, then, with female athletes, who undeniably possess these qualities, tackling the carefully built and protected idea of male superiority from every angle? A female athlete can’t often be considered physically weak, the discipline she strong-mindedly follows rules out good old “hysteria” and an Olympic Gold Medal simply can’t be looked down on. What does the male gaze do then,  to gain back control over the “masculine” female athlete?

It must strip her womanliness from her, declare her unattractive, and deem her success unworthy of male attention.

She may be seen as strong, but beastly: successful, but incapable of attracting a man’s attention, admiration, even love. When she is openly LGBTQI+, the stereotypes compound.

“Too good” at sports

Funnily (sic) enough, female comedians have faced similar challenges. Humour, just like athleticism, is traditionally considered to be a masculine quality. Certain women were allowed to enter these territories, as long as they acknowledged that they were only lucky visitors — tolerated either for never pretending to be totally worthy of the opportunity or for their ability (and for certain, their willingness) to serve as visually-pleasing objects for men.

Women can be funny and athletic as long as they don’t threaten men — not just the funny and athletic men, but any man. I learned this only in my teenage years. In my experience, I was lucky. My parents have always supported my sister and I to play sports, just like they encouraged my brother. In high-school, however, we had different games for boys and girls in PE lessons. Because I was considered “so good” at sports, I was allowed to play with the boys (talking about basketball, handball and football here). A female classmate who played handball in a club had to literally lobby for the same privilege. It was only the two of us (out of about 20 girls) who were allowed to play with the boys. However, no boy was ever made to play in the girls’ “less serious” game, no matter how clumsy he was — and I assure you, some of them were very clumsy. Sports were considered to be flowing in their veins, alongside and inseparable from testosterone.

I wonder why no one questioned this system. I can only imagine how daunting it might have been for a less athletic guy to try to fulfil the traditional expectations, be ridiculed for not catching the ball, while he probably would have enjoyed a less serious game – even if it was with the girls – much more.

“Too pretty” to be good?

It is another common misconception that only those women go into professional sports that are already too unattractive to do anything better with their time than go to training.

According to this, only those girls Rocky-it-up at 4 am whose appearance can’t ever be enhanced by beauty sleep and only those skip a Friday night-out for a Saturday’s match who have nothing to expect from that night-out anyways.

At the same time, a female athlete who is “traditionally” beautiful is often criticized for her beauty. Jwala Gutta, an international badminton player and 14-time winner of the National Badminton Championships, talked openly about her relationship with the notion of “beauty vs. athletics”:

“I love fashion and I don’t step out dressed shabbily. But why is that a basis for accusing me of not being focused on my game?”

– she said in an interview with Open.

While Gutta is often criticized and ridiculed for her physical attractiveness on social media, Serena Williams (who really needs no introduction) had to deal with quite the opposite. She talks very openly about her struggles with her body image, due in part to being bullied on and off the court.

Contrary to men, female athletes are still too often judged on their appearance rather than on their athletic achievements. And in this game, they simply can’t win. They are considered to be either too sexy or not sexy enough, too beastly or not beastly enough.

Thanks to the bravery and persistence of athletes like the Williams sisters, Jwala Gutta, Katinka Hosszú and many more, young girls have role models now. Still, the stereotypes are far from being demolished. The oversexualized image of the Sporty Girl I opened with, lives still too vividly on our screens and (consequently) in our heads.