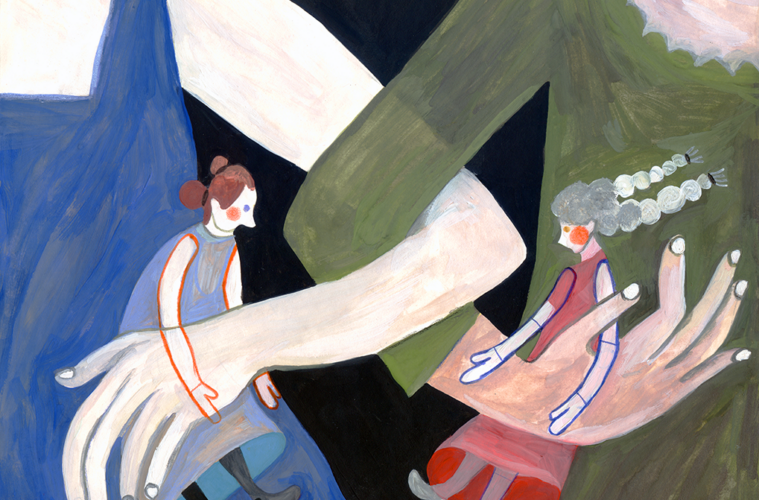 Female friendship in literature: an analysis of “My Brilliant Friend”

“We were twelve years old, but we walked along the hot streets of the neighbourhood […] like two old ladies taking the measure of lives of disappointment, clinging tightly to each other. No one understood us, only we two – I thought – understood one another.“

Too often we focus our discussions on romance, however, friendship is maybe the most underestimated of all human connections, and female friendship probably the most difficult one.

The one above is a quote from “My Brilliant Friend”, the first of 4 books of the multi-awarded series The Neapolitan Novels by Elena Ferrante. It talks about the deep and somewhat complex friendship between Lila and Elena, two girls growing up in the suburbs of Naples.

It is not just a novel about two little girls who happen to be friends. It uses friendship as a background to other themes including politics, society and women/feminism, set to the backdrop of a poverty-stricken Naples.

The books indeed, provide an interesting hint on what friendship represents for us – as women – which is something we rarely take into the analysis.

As girls, our relationship with the same sex has always been marked by contradictions. Through her characters, Lenù (nickname from Elena) and Lila (from Raffaella), Ferrante draws a clear and almost complete portrait of this fascinating dynamic. In Naples of 1950, as Elena constantly points out, domestic violence ‘was a daily thing’, and women were just an instrument of reproduction and a prize to be shown in the neighbourhood as a sign of power. Friendship was for women a benefit that few could afford. The beauty of these books is that they would be valid in a different place and time.

Reading them made me think a lot about the friendships I have always had in my life and I realised that I had never really reflected on them.

We’re all taught how to behave in a romantic relationship from an early age. At 15, we already know which are the rules of flirting that you have to try to show the best part of you, “selling” all your defects in a shiny cover. And from a certain, ideal point of view, it is pretty easy: you meet someone, you accept the person, and you try to shape him/her in the most suitable way for you, sometimes with compromises.

But no one tells us how to deal with friendship, where the acceptance part gets much more complicated. That is a path we’ll eventually discover on our own expenses day by day.

The common idea, often attributable to the patriarchal society under which ‘women are women’s worst enemies’ is probably the most used one to justify our inclination to be less relaxed in our relationships with the same sex.

Many of our favourite movies and TV series have got us used to the idea that the “cool girl” often has a male best friend, she prefers to stay with the guys and despises what is deemed as “girly” behaviour.

Although Elena Ferrante analyses the topic in a very peculiar way, she is not the only one.

In her book “A passion for friends”, Janice Raymond names the Gyn/affection as the complicity between women. She believes that the context in which women live is crucial in making them aware of this kind of connection. So that, an environment where women are free to share their personal life with each other, without boundaries and social limitations, is for Raymond, the only way they can recognise the importance of their peers. On the contrary, if the society is characterised by stereotypes and boundaries on women’s freedom, the complicity can’t happen and women will never recognise how important it is for what the author calls the basis ‘for social and political existence’.

It’s maybe hard to admit but, as women, our most important relationships are very often with other women.

We tend to project in our friends what we would like to be but if we don’t succeed like them, we start feeling frustrated and competitive. In Ferrante’s books, Lila starts to feel jealous when Lenù chooses to leave the neighbourhood to go to another city to study while she has to stay in the suburb working in her family’s shop. At the same time, she also sees in her friend her only way to escape from misery. Both are smart and ambitious but just one has the chance to study and become someone to be recognised as an intellectual. So their friendship, as many of ours, is built on the admiration for another human being so similar to us that sometimes we feel they could even be a threat.

Being ambitious women in a patriarchal society like the one in the “Rione” is what the two girls hate the most, and they find in each other the strength to overcome the feeling of anxiety that comes from people around them.

Why don’t men experience the same struggle in keeping their friendships? If I look at my personal social life, many times I find myself more comfortable talking with my male friends. Guys don’t have the same barriers as we have. They don’t need to care about showing their achievement, because around them people already know they’re strong.

We are in a giant bubble where someone outside is making the rules and watches us fight against each other.

That’s why Ferrante’s novels are so revelatory. Starting from a small suburban reality’s story, she is able to convey that (apparently subjective) view into the ones of us all. In fact, we can relate so much to Lila and Lenù because we know them. The beauty of this piece of work is that points of view are often completely free of moralism. Even the evilest thoughts are forgiven  – not justified –  because they are part of human nature. Also, the male point of view seems to be completely put aside, just as a frivolous ornament to give women space to tell their fears, ambitions and limits without boundaries.

Friends can be a resource but they can also show us our very own dark side. In our fight for self-fulfilment, they are our element of disturbance, keeping our secrets and our flaws.

Finally, Jane Raymond also states: “Friendship provides women with a common world that becomes a reference point for location in a larger world.”

That means we need to try to find the bubble of noise and try to break it. It means women need to be aware that their friendship can truly be a revolution, a political statement. We all are a Lenù who needs her own Lila (and vice versa).

Written by Elena Giuliano.
Elena is a journalism student, with a first master’s degree in Economics. Coming from Bari, Southern Italy, she is proud of her cultural heritage. She is passionate about cinema, music and she’s into film photography.

Responsible Coverage of Violence Against Women: How Can the Media Do Better?