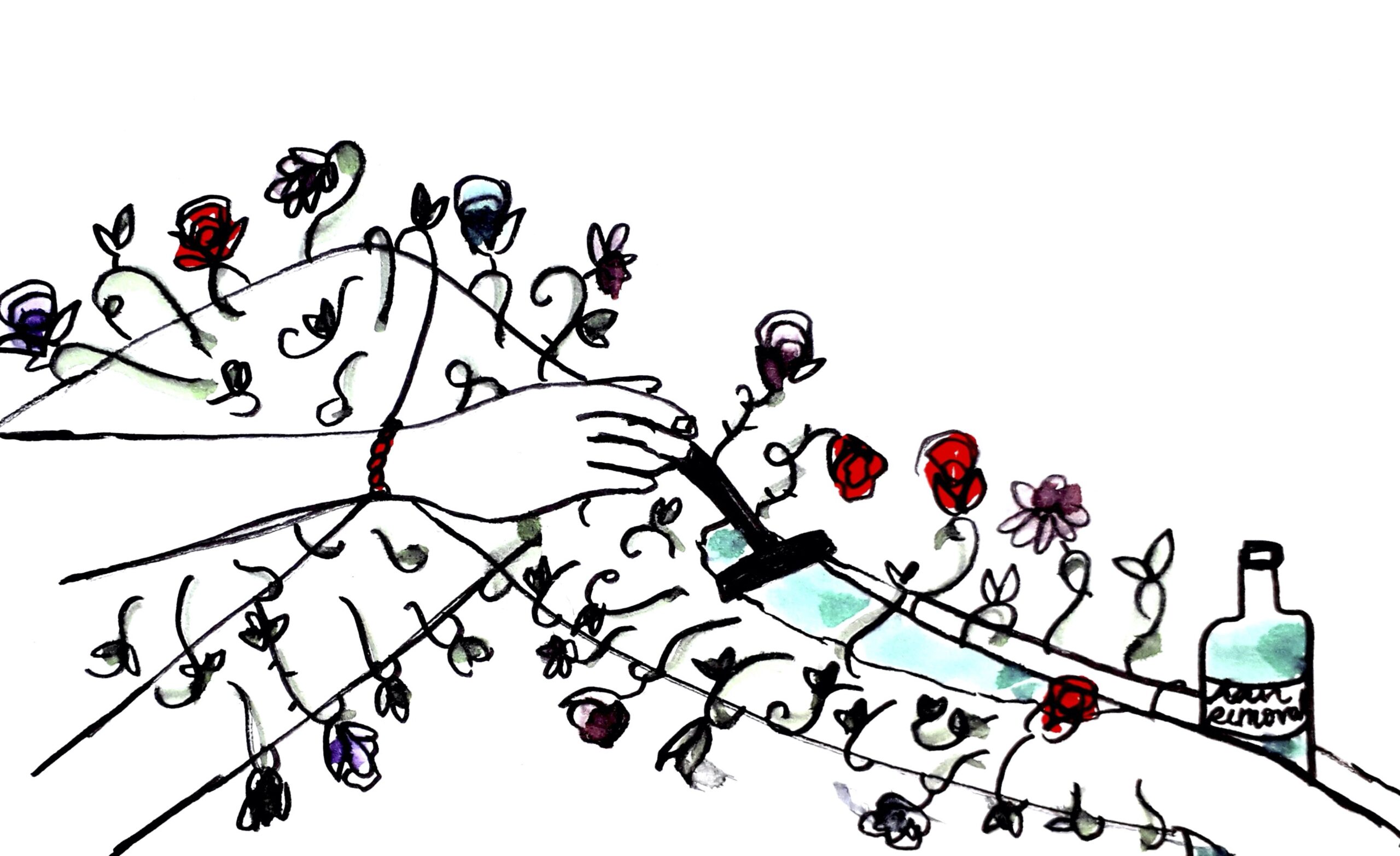 Society Is Killing Your Sex Drive… How To Get It Back

The patriarchy is, once again, ruining your life. And this time: it’s your sex life. Looking at advertising, social media, even each other, Becky unpacks why we feel the need to preen our nakedness – and why we need to work to let it go.

In The Beauty Myth, feminist author, journalist and political advisor Naomi Wolf observes how the ‘“ideal” female body’ is displayed everywhere, making way for the ‘anxious and minute scrutiny of the body as intricately connected to female sexual pleasure.’ In other words: we are bombarded with images of the ‘perfect’ woman and are shown how sexually happy she seems to be. The orgasmic sigh when bronzed, naked and hairless on the perfume ad, caressed by a man whose perfect designer stubble matches his perfect designer abs; the arched back of the newly shaven goddess in the Gillette advert; the secret smile of the Instagram influencer, advertising her newest line of lingerie. The list goes on (and on). No longer preoccupied simply with clothing, make-up and hairstyling, we now feel the need to preen our nakedness if we want to be universally sexually attractive and thus, apparently, sexually satisfied.

But the link that supposedly connects the ‘anxious and minute scrutiny of the body’ with a woman’s ‘sexual pleasure’ is cruelly absent. Despite the hours of waxing, shaving, hair-dying and weight-loss, we do not become sexually invigorated. The pressure of undertaking each step to attain so-called body perfection is exhausting. How many times have you postponed sex just because you haven’t shaved, showered, or made up your face? Sure, in the comfortable months of a long-term relationship you feel empowered to get straight to it, but what about in those first few weeks? In 2016, Cosmopolitan published an article ‘Why I Wore Makeup For Almost 1 Year’ with the subheading ‘I Can’t Wash My Face When I’m With You’ (A pun on the song ‘I Can’t Feel My Face). It discussed the anxieties surrounding when was the ‘right time’ to take off your make-up. How can we enjoy sex if we’re constantly worried about our perfectly made-up façade slipping? Indeed, as Wolf states: ‘By having to “present” herself to her lover as “beautiful,” the woman remains not fully known’. This disconnect between partners hinders intimacy, which in turn, delays genuine love.

So if the imposed beauty regime doesn’t serve to increase our sexual pleasure, then why is it ingrained in us that it does? Control and money. Inequality and lack of communication are embedded within our society, a society that also profits from an absence of female pleasure and a sexual disconnect between men and women. Indeed, as Naomi Wolf declares in The Beauty Myth:

‘The last thing the consumer index wants men and women to do is to figure out how to love one another: The $1.5 trillion retain-sales industry depends on sexual estrangement between men and women, and is fuelled by sexual dissatisfaction. Ads do not sell sex – that would be counterproductive if it meant that heterosexual women and men turned to one another and were gratified. What they sell is sexual discontent.’

Sex toys are promoted as ‘sexy’ and marketed as an essential item, pre-empting your lack of sexual satisfaction in the bedroom, providing a solution that isn’t communication or educating your partner, because that’s too hard and embarrassing. Don’t get me wrong, I do not disapprove of sex toys. Quite the opposite in fact; as a way of exploring yourself and a means of satisfying both active participants, it is a wonderful addition to a healthy sex life. What I disapprove of is the way in which it encourages discourse surrounding the difficulty of female orgasm, when this is simply a fallacy. It only takes a quick google search to find article after article, year after year, betraying straight women as the demographic who have the fewest orgasms. Indeed, the subheading taken from Vice’s article in 2017 – “the elusive female orgasm isn’t really that elusive at all – just ask lesbians” – pretty much sums it up. To once again draw upon Wolf: ‘women are exaggeratedly sensitive to male desire for their own arousal and men are exaggeratedly insensitive to female desire for theirs.’ It presents as the biggest (proven) disaster for guaranteed female pleasure. But how have we allowed this to happen? I hear you cry. And a few calls of ‘But my boyfriend makes me come!’ – so did mine. But we’re the lucky ones.

Though we have come a long way in terms of acknowledging female sexuality, we still don’t seem to own it. Though women are seen as more actively willing participants of sex than our grandmothers or great-grandmothers, I find the total absence of discussions surrounding female pleasure when it comes to sex education deeply disturbing. Masturbation: what to expect of your body during sex, how women need to essentially ‘warm-up’ beforehand. For some women, this can be prolonged kissing, for others extensive foreplay is required and it is all normal. It should be acknowledged, talked about and moreover expected. Even now, as an adult in my early twenties, friends and acquaintances exclaim how ‘lucky’ they are to have a partner who performs oral sex as if it shouldn’t be a requirement. Since time immemorial, blowjobs have been considered a sexy starter, a premonition of sex that is to come, despite it being universally acknowledged that in no way do men need a warm-up (in fact, it can actually reduce the time actually having sex). The anxiety surrounding oral sex (how do I lie down? Do I like the angle he sees me?) once again suppresses female pleasure by attacking our self-esteem. Creeping doubt tells us that we must appear inherently beautiful at all times. We hinder our own pleasure by succumbing to it.

Instead of a beauty regime, we need a self-confidence regime. Who cares if we have a double chin, or he can see that spot on my upper thigh? He doesn’t care. I promise you. And if he does, find someone who doesn’t.

We live in a society where a woman’s worth is intertwined with her sexual performance. When I was 16, to be frank, relationships scared me. I’d witnessed other girls around me pressured into sexual relationships, often young and before they were ready, to please their boyfriend – or worse: to avoid a break-up on the grounds that someone else would put out. This grey area, which could be labelled coercion, horrified me. I wanted my first sexual experience to be on my terms. At nearly 18, completely unattached, I met someone in my local nightclub who I really got on with, and had sex. I lost my virginity practically, but I was safe and in control. It was not really romantic, but I didn’t want it to be. That night, I felt independent and powerful. My sexual experience was on my terms. But I was slim and white. I shaved beforehand, preened and made sure I looked and smelt ‘pretty’. I adhered to society’s standards of nakedness so that I was permitted the illusion of confidence, at least partly convinced he’d like what he saw. Now, I’m not saying that you shouldn’t feel confident when clean-faced, with a full bush, whatever size and whatever race: you should. But I know a lot of girls who don’t. Girls who want the lights off, or who won’t get fully undressed, or will delay sex because they’re worried about not getting a clean shave/ breaking out/ not having time to preen after work.

Women around the world are denying themselves orgasms on a daily basis because we feel undeserving of them when looking less than perfect.

As hard as it is, we need to work hard to undo the horrible work of a patriarchal, capitalist society – starting with ourselves. We need to take the leap and say: I’m not shaving today, because I know I’ll give myself shaving rash. And let him react. Nine times out of ten, he won’t even notice. If he negatively comments, he’s a dick. Get rid – someone else won’t expect such an insane amount of preparation (ask yourself: does he do it?) And why do we permit a relaxing of such a regime when we’re in a relationship anyway? Because we know he finds us attractive. Assume this attraction from the get-go. It will save you a whole lot of time.

Essentially: we need to start choosing the orgasm over the beauty regime because, at the end of the day, it’s a whole lot more enjoyable.

Written by Becky Percival.
Becky has just graduated from Durham University with a BA in English Literature and French. Lover of literature, philosophy and laughing out loud. She wishes someday of a job in the publishing sector, and harmonious and sustainable life on Earth, but for now is happy consuming as much fiction and feminist theory as she can get her hands on.