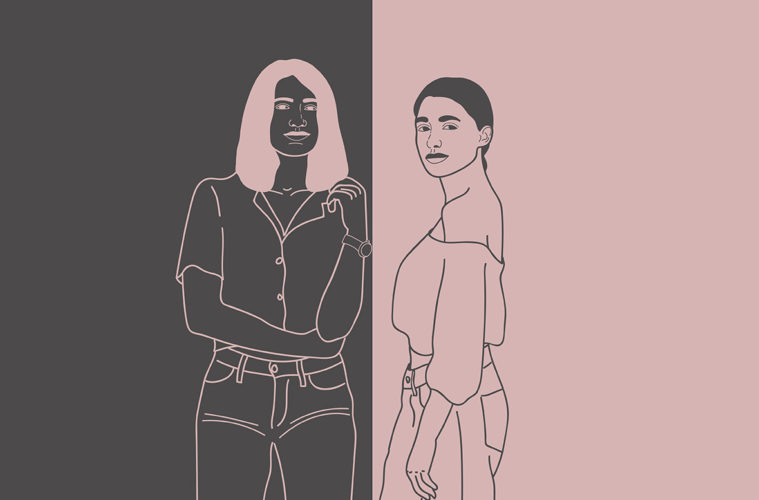 Vénusz Projekt is a Hungarian bi-weekly podcast engaged in social and gender issues. As being one of the first feminist podcasts of their language and country, hosts Lili and Hanna examine feminist aspects of such fields as literature, culture, music industry, environment, social sphere & human rights, inviting guests to share their personal experiences. We sat down with them for a chat to talk about feminism, the podcast, and their social responsibility as one of the loudest voices in the national feminist sphere. To hear our full chat in Hungarian, in which we also talk about the inspiration behind Lazy Women, check out their newest podcast episode here!

Q: What does feminism mean to you? Has your understanding of feminism changed through your experience of running the Vénusz Projekt podcast?

Hanna: Well, before starting the podcast, when I first met Lili, I wouldn’t have said that I myself am a feminist, even though I had a pretty good idea of what feminism represents. Since then, I have learned more about the nuances and details, which has shaped my opinion a lot, and now I would definitely say that I am a feminist. To me, it means equal rights.

Lili: I agree with Hanna, to me, it also means equal rights, equal opportunities, equal rewards for equal efforts. Whether we have to prioritise and advantage women to achieve this, is another question. Throughout our podcast, seeing how differently people experience feminism and femininity and how they see the pros and cons of being a woman in different professions have had an impact on the way I think of feminism. For instance, I wouldn’t have thought how differently femininity is performed and valued in literature and in the music industry. And these differ even more from experiences in homelessness and poverty. These episodes have introduced me to many interesting angles of feminism, and I hope that we do these differences justice in how we portray them in our podcast. Our main goal is to introduce as many people as we can to this diversity in feminism and femininity.

Q: To what extent do you think that you have to represent one view of feminism?

H: I think because we approach this project as journalists, we don’t want to solely represent one viewpoint. Though we do have our personal opinions, which probably comes across in the way we write our questions, we aim to introduce our audience to many different angles of feminism in a way that doesn’t communicate any value-judgement. This is something that we greatly value due to our professions.

L: I think it’s also key to approach our topics with an open mindset and be open to different interpretations and viewpoints.

Q: As one of the main feminist voices in Hungary, do you feel any pressure of social responsibility, due to the size of your audience and your impact?

L:  Originally, I reached out to Hanna with the idea of this podcast because I really wished there was a podcast in Hungary that discusses social issues through a feminist lens. Another leading feminist podcast called Mi a femme started roughly around the same time as we did, though I wouldn’t say we are competitors, as their concept is completely different. It’s usually just the two of them discussing different topics, and they express their opinions a lot more explicitly than we do. In contrast, we really aim to showcase different opinions and different experiences of the guests we invite. And in deciding who to provide a platform for, I think we do have some social responsibility, and so we try to invite people who otherwise wouldn’t have the chance to speak to such audience about such topics. We had a lot of guests who you can’t really see elsewhere speaking about feminism, such as famous Hungarian actress Moni Balsai, or with Barbi Schoblocher, the singer of Blahalouisiana.

H: This was one of our core conceptual decisions at the very beginning, that we didn’t want the podcast to be just us talking.

Therefore, I think our responsibility is in a sense very close to the more traditional responsibility of journalists, in deciding who we give a platform to.

In order to make the right decisions, we really have to be informed of what the given guest is doing at the moment and whether they have given any interviews recently. I feel that our responsibility lies more in the choice and portrayal of the guests we invite, not necessarily in our own personal opinions.

L: I feel that the way we phrase our questions is also often indicative of our own opinions. Not necessarily by explicitly stating what we think, but we tend to ask about areas that we are interested in, and often phrase questions in a way that it contains some of our views. We also had an episode when it was just the two of us talking about journalism, which was obviously more personal to both of us.

H: Speaking of Hungarian feminist communities, for example, I know more “radical” feminist groups, but we are not really involved with them as we wouldn’t categorise ourselves as radical feminists. Once we received an invitation from such a group to participate in a panel discussion, which hasn’t happened yet, but we are really looking forward to it. But most of these communities are quite hidden and hard to find, though I’m sure these are great communities.

L: I’d also like to add that there are really influential feminists as well in Hungary, who have thousands or tens of thousands of followers on Instagram, such as Pinazine or Ciklusmesék. It’s just that there is no unified, organised movement, there are no opportunities for young girls who are interested in feminism and art, literature or fashion, and like to go out to talk about this stuff and be around like-minded people. But there are some events that are being organised and we see really good signs of a feminist community growing, it’s just not there yet.

H: Also, I don’t know if you have heard of this Hungaro-feminist group, who work with elements of Hungarian folklore with a feminist angle, sort of reworking its elements and choosing what parts to keep and what to leave behind. I think their work and approach is super interesting, and hopefully maybe in the future, this approach to folklore will be incorporated into how they teach about our culture in the formal educational sector.

L: There is also this book that tells Hungarian folklore fables from a feminist angle which sounds great, I haven’t read it yet though. I was just reflecting on this earlier today while listening to some American podcasts, and

I think in Hungary we skipped the stage of popular feminism.

We simply jumped into non-popular, class-based feminism and well, to some extent intersectional feminism, which we are still trying to reach. Some very influential feminist books that have reached great success in Anglo-Saxon countries have been translated to Hungarian but haven’t reached quite the same popularity. These are for example Lean In by Sheryl Sandberg (we talk about Lean In here on Lazy Women – ed.), Bad Feminist by Roxane Gay or Feminists Don’t Wear Pink (And Other Lies) by Scarlett Curtis – they are all available in Hungarian translation. The lack of the experience of popular feminism to me seems to really limit its reach, as I don’t really see feminism as something that an average woman resonates with. Usually, when I talk to other women, even at my age, many of them seem to condemn feminism. So I end up spending a lot of time explaining to people that feminism is not equal to women trying to exclude men from society. This experience inspired my personal blog as well, called Mindennapi Feminizmus/ Everyday Feminism, where I try to make feminism more accessible to all women.

H: And I think in many cases, the reason why people condemn feminism is that they just think it’s trivial and there’s no need for it. Yet it’s not. And in this sense I feel like there are some similarities with Black Lives Matter / All Lives Matter – to some, it might be evident that women have equal rights as men, but first, it’s not that self-explanatory to everybody, and second, there is still a lot for us to do to achieve this equality.

I often hear people saying something along the lines of “feminism is not evil, but what’s the need for it if we‘ve already achieved equality?”. Once you dig deeper, you see that there is no complete equality yet, and that’s why these movements are crucial.

Though I really want to see the day, if such a time can exist, when feminism is not necessary anymore.

About the hosts of Vénusz Projekt:

Hanna is a Budapest-based freelance journalist, liberal arts and philosophy student. As a journalist, her main interests are music, music sociology, art and culture, but as the co-host of Vénusz Projekt podcast, she is engaged in gender-related and social issues as well.

Lili is a sociology student and freelance journalist based in Budapest, writing about social issues, gender equality, minorities, arts and literature. She is also a podcast addict and the co-host of Vénusz Projekt, a feminist podcast in Hungarian.

Interview by Zsofi Borsi and Bori Toth, transcribed and translated by Bori Toth