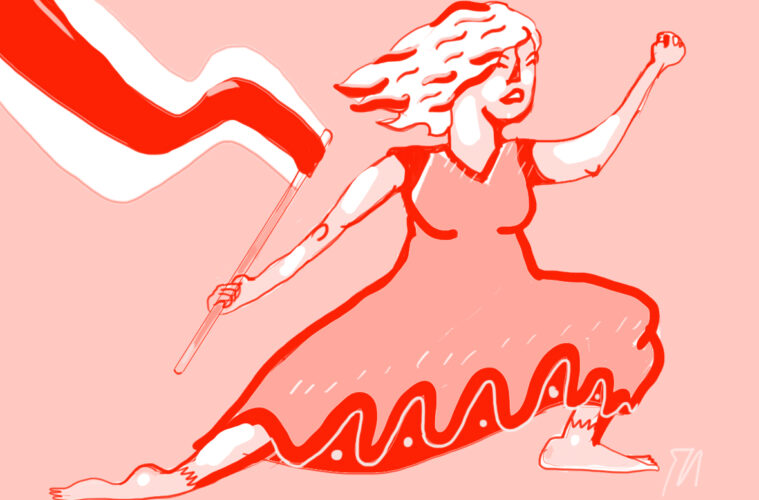 The dictator must go: Lazy Women reports from Belarus

Our reader Viktoriya, a Minsk citizen, reports on the currently unfolding events in Belarus.

Currently, the Belarusian nation is fighting for free and fair elections. Alexander Lukashenko was first elected as the president of the Republic of Belarus in 1994 and has been ruling the country since. On August 9, 2020, he was “re-elected” again to rule for the  26th year in a row. People have taken to the streets to protest and show their concerns, as they strongly believe their voices are not being heard. Across the news, all over the world, he is often being referred to as “the last dictator left in Europe”.

Independent polls show that less than 3 percent of Belarusians voted for him, whereas official results show over 80 percent of the vote for Lukashenko. I myself went to vote in London, and there was only one space to vote for all Belarusians residing in the United Kingdom. The queue was enormous and although I spent eight hours queuing, my turn never came. Many people were saying this was done on purpose so that many people would not have enough time to vote. The same issue occurred in other cities all over the world like Berlin and Warsaw.

Despite these challenges for voters, independent polls show over 70 percent of the votes were cast in for Sviatlana Tsikhanouskaya, who is one of the candidates for the presidency and a new figure in politics. She is the main challenger to Lukashenko and has absolutely refused to accept the official result of the exit polls. She entered the election when her husband was jailed (officially he was responsible for rape – however, it has never been clear who are these women who made this announcement and blamed him for it; instead her husband was just grabbed by the police when he was trying to register people to support Sviatlana as a presidential candidate) and she has led large opposition rallies since. She said the election results “completely contradict common sense”.  A lack of monitoring at polling stations – with no non-governmental or third party observers at the polling stations to oversee voting – has led to widespread fears of vote-rigging. Tikhanovskaya is currently located in Lithuania for the purpose of her own safety.

For two weeks, ongoing protests have been held all over Belarus – as well as all over the world – as Belarusians who are living outside of Belarus are also standing up for their country’s freedom.

The protestors have been not only peaceful but very respectful of the locales they are protesting in.  No vehicles have been damaged by protestors. People are staying after the protests and cleaning the streets, ensuring that the cities are being clean and the streets are nice to walk on following protests. Protestors are even taking off their shoes before standing on benches to make sure people can sit on clean benches the following day.

And yet, these peaceful protests have been met with violence from the Belarusian police. A lot of protesters, both men and women, have been put into jail in Oktestino or Zhodino (regions in Belarus), where they have been beaten up and even tortured. Those who have been released have been speaking up about the abuse occurring in these prisons.  They are saying: “Everything is directed on the humiliation and even torture of a person that is there as a detainee. Try to stand on your knees, head down, face to the floor. We were standing like this on solid ground for about 3 hours. They did not give us water for almost a day.” (Quote taken from @voicesfrombelarus Instagram account – an independent source which translates all videos/interviews to English)

However, jailed protestors are facing even worse violence and abuse beyond this. Doctors are confirming that there is medical proof that some people have been raped with batons, have suffered concussions from beatings, and have been tortured for days on end without any food or water. Some imprisoned protestors have died, some are still missing, and no information is being given to their families regarding where these people are. So what is next? Who will be held accountable for these people’s deaths, tortures and injuries?

Several thousand factory workers are currently striking in Belarus, and many other workers are facing threats from their bosses that are preventing them from joining the thousands already striking. On the ninth straight day of protests against the official results, Lukashenko flew by helicopter to the factory of the capital in a bid to rally support but was heckled by workers chanting, “Go away!”.

“I will never cave in to pressure”, Lukashenko told the workers.

“Some of you might’ve got the impression that the government no longer exists, that it has tumbled down. The government will never collapse – you know me well.” As he spoke, more than 5000 striking workers from the Minsk Tractor Works plant matched down to the streets of Minsk demanding that Lukashenko cede his post to Sviatlana Tsikhanouskaya.

Last Sunday, August 23, peaceful protests were held in the centre of Minsk again. Lukashenko flew to the location of the protests in a helicopter with his 15-year-old son in town – both wielding machine guns. This was the president’s welcome for his people. The rule of law feels non-existent in Belarus these days, following the election.

The EU Commission has already spoken up about the situation in Belarus, saying they do not accept the official results of the exit polls. Canada and a few other countries have spoken up on the issue as well, also refusing to accept the results. . Russia however supported and congratulated Lukashenko in “winning” the elections again. Belarus needs further external support from countries and people all over the world, as they are clearly not getting any institutional support from within the country. Belarusians ask that you raise awareness about the situation, share information on your social media accounts, and speak to your friends and family about the illegitimate election results and the inhumane treatment of protestors in Belarus.

People must have the right to demand justice for their country: the right to vote, the right to speak up, and the right to peacefully protest without being afraid for their lives. But the reality is that people are being punished and tortured for trying to create a better future for their country and for the centre of Europe on the whole. Having a “dictator” as your leader should not be the case in a “democratic” European country in 2020, and I am above and beyond proud of my nation and my fellow citizens for fighting for what is right. All your support would be much appreciated, we can only achieve a change when we stand by the truth together.

Opportunities to get involved and support the Belarusian nation’s future: