BRAWE is a project that brings together young Turkish and Hungarian artists who are fighting against patriarchal oppression.

BRAWE took place in the cities of Eskişehir and Budapest simultaneously and brought artists, scholars, and activists together for experimentation and collective work. Thanks to the invitation of Bánkitó Festival, an alternative Hungarian festival that is one of the project’s partners, I visited their exhibition in the festival on behalf of Lazy Women.

The first area I visited was the Turkish Coffee and Fortune Telling project, a joint work of Elif Atılır and Berrak Güloğlu. The project dealt with fortune-telling – one of the most powerful daily habits among Turkish women – from a feminist perspective, emphasizing its importance for women who do not have access to therapy. After explaining the fortune-telling ritual to the participants, Berrak and Elif explained the meanings of the symbols, giving the participants a chance to experience what this ritual means for Turkish women: a free space to strengthen and heal each other, and talk about their future concerns (as they would to a therapist) through fortune symbols.

In Deniz Varlı’s project, participants were asked to write sexist and discriminatory statements on toilet paper. Afterwards, these papers were turned into pulp to create new forms. Deniz invited us to watch the transformation process, emphasizing that the change we expect begins in language. It was extremely clever and impressive to see sexist words take on a new form and the symbolic power of the work.

Klaudia Januska and Hediye Usta, toured the festival area with their bicycles, chanting slogans and handing out flyers. Their slogans and flyers were often a response to the sexist remarks faced by women.

Two women on bikes were chanting slogans such as “The world would turn upside down if women were free” and “As women, we are the cure for each other”. 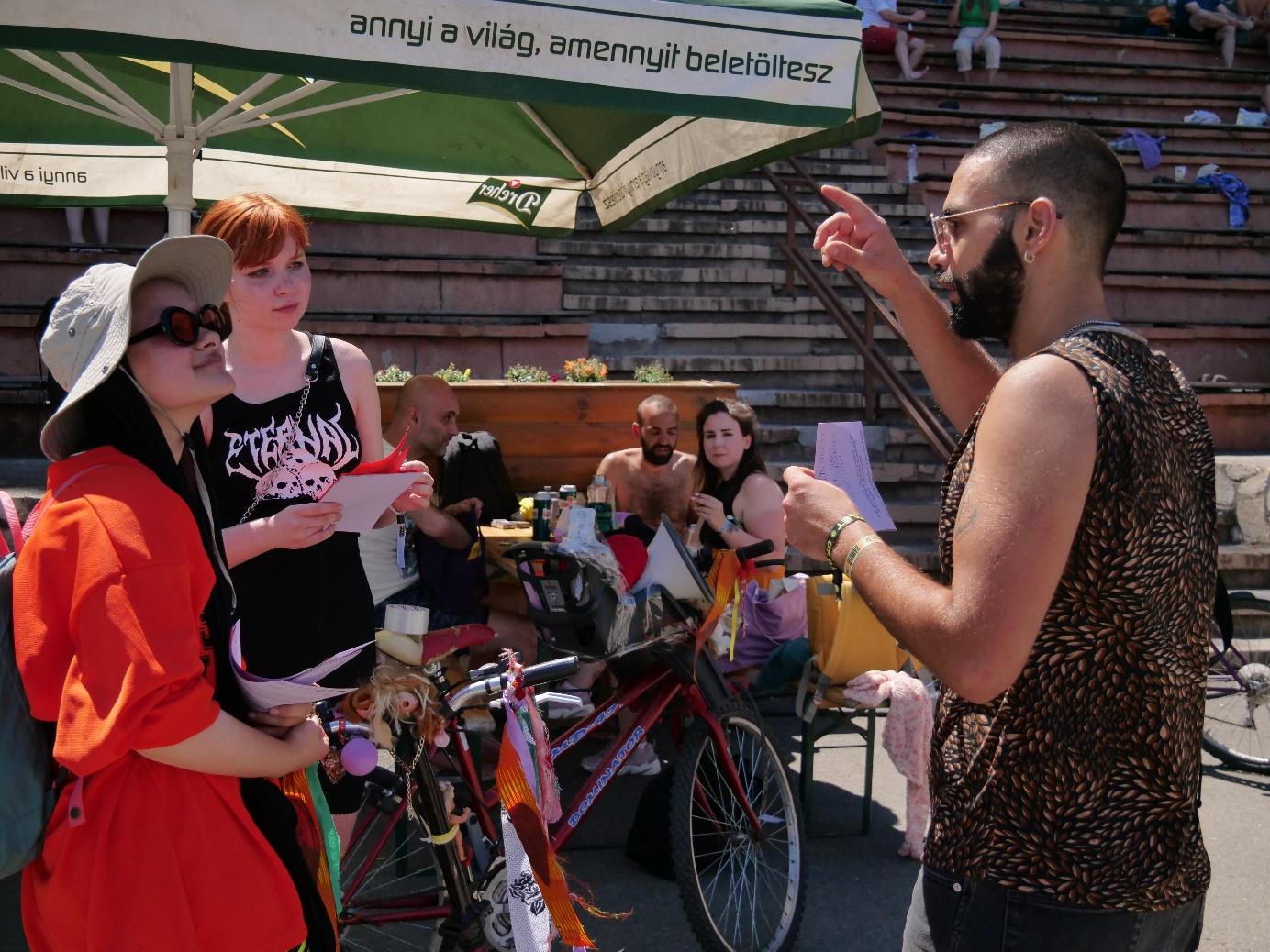 The Istanbul Convention, which was repealed in Turkey, was also among the slogans. It was initiated in Istanbul by the Council of Europe, of which Turkey is a member, in order to prevent violence against women and to ensure the protection of women and girls who have been subjected to violence, and is the first international agreement to deal with this issue. Turkey, the first country to sign and put it into effect, repealed its decision as a result of the presidential decision published in the Official Gazette on 20 March 2021 on the grounds that it violated family unity. 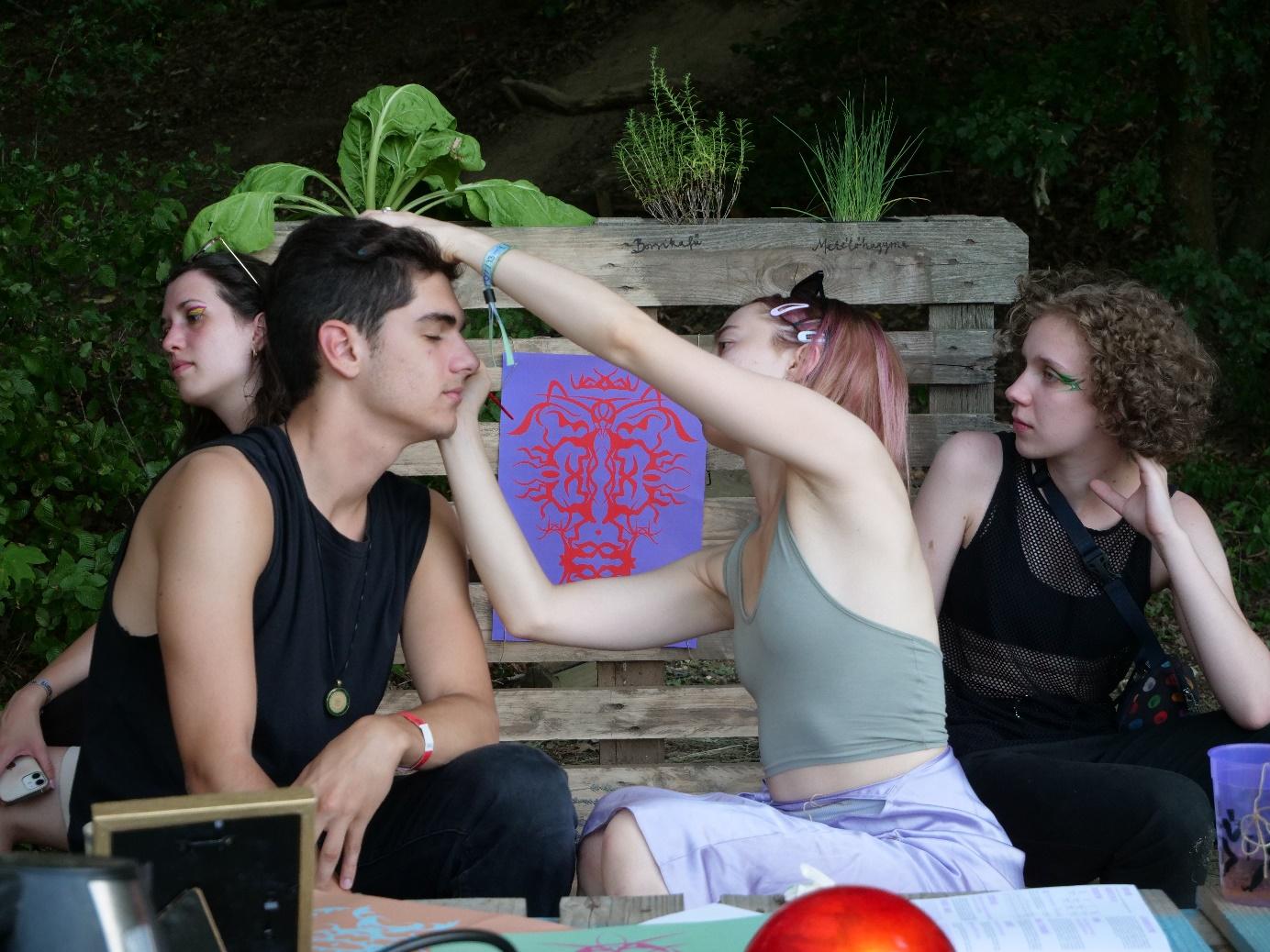 The Modern Witchcraft project by Franci Kas, Renáta Szabó, and Magdaléna Szijjártó focused on the connection between feminism and witchcraft. A manifesto about witchcraft and feminism awaited the participants in the area, which had been transformed into a modern witch gathering place with face paints and make-up.

Overall, the exhibition showed the powerful ways in which Turkish and Hungarian women are reclaiming their power, in bold and unusual ways.

Many thanks to Bánkitó Festival and the awesome team of BRAWE women for this invitation!

The team of BRAWE artists, including the wonderful Lazy Women illustrator Nora Csendes, is as follows:

If you want to take a look at the works of the artists, do not forget to visit the BRAWE instagram account.

BRAWE Projects is supported by Vaha Hubs, an initiative of Anadolu Kültür and MitOst, funded by Stiftung Mercator and the European Cultural Foundation. VAHA partner consortium is in a collaboration with the IAC Berlin to implement a series of thematic workshops and network meetings. VAHA thanks the Chrest Foundation for its support of travel-related expenses.