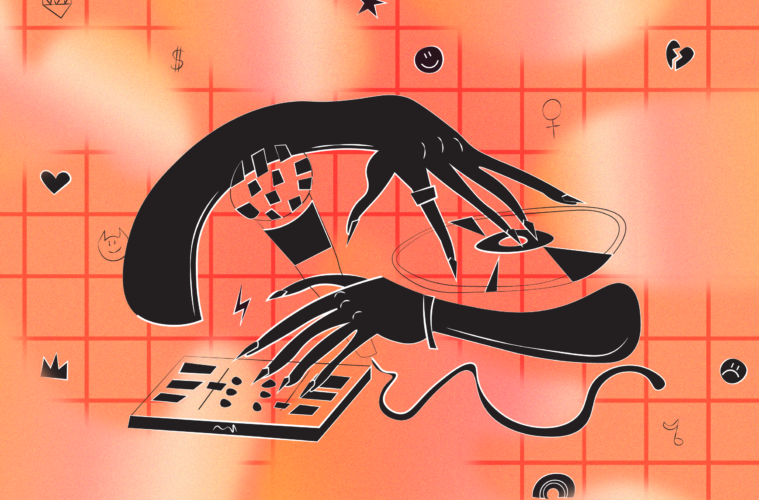 … Who do you listen to when you want to feel like a bad b*tch?

Coming out of several lockdowns, I’ve noticed something – almost independent of my mood, my choice of music doesn’t really change. Whether I am going to work, getting ready for a party, or doing a workout, I turn on a playlist that is called either “Feelin’ Myself”, “Bad B*tch Energy”, or something similar full of Cardi B, Megan Thee Stallion, and Doja Cat singles (just to name a few). But why? When I asked around, it turned out I was not alone.

It is not a new thing that women can rap. It is also not new that women can rap well, equally well as men. Just listen to how Ms Roq is killing it on Dr Dre’s album from 1999, or check out Queen Latifah’s famous single back from ’93. But lately, we have seen more and more women in hip hop; they have created a new space in the music world empowering women, and haven’t taken any objectification or racism.

I asked my friends, my followers and people who were willing to fill out a lil’ form, and surprisingly or not, the responses coming back were pretty similar to my experience. People in Eastern Europe listen to H.E.R., Little Simz, and M.I.A because it makes them feel good. It’s as simple as that.

But why is it so empowering to hear women talk, sing, and rap openly about their bodies, sexual desires, and basically everything? And how do they reach not only women of colour but also girls from entirely different cultures?

Princess Nokia, Lizzo, Beyoncé – the list of how many women have sung or rapped about their own or other women’s bodies positively in the genres of hip hop and R&B is endless. When women compliment other women’s appearances, it hits differently. Because we (for the most part) don’t have to be afraid that they just want to sleep with us or objectify our bodies. It helps us feel happy in our skin, no matter what it looks like. As a result, beauty standards are being dismantled, and more and more sizes, skin types, faces, etc., are represented in pop culture, especially in these genres. Although there are still some drawbacks – e. g. the fetishisation of black women – not only do women enjoy the positive effects, but this has gradually changed the narrative of how women are seen in hip hop.

Opening up about sexuality

Maybe WAP by Cardi B and Megan Thee Stallion is the perfect symbol of this vital movement in hip hop, especially when it comes to feminine sexual freedom. Feminists have discussed how it is a step back rather than a step forward for hours in podcasts and articles. Nonetheless, it is an essential part of breaking down the taboo around vulva “issues” (masturbation, lubrication, etc.). Women’s liberation and sexual enjoyment have been suppressed from the beginning of time (when Eve bit the forbidden fruit or when witches were burnt alive for being “promiscuous”), especially in the case of black women. So, there must be something so controversial about the fact that women are starting to talk about their sexual desires without fear. This song opened conversations in 2020, and whether or not it is a product of the male gaze, it has encouraged women to express themselves sexually ever since.

Expressing a wide range of emotions

Although women have been socialised to express their emotional side way more freely than men, the spectrum of emotions is getting wider among female musicians. When I asked my friends and followers how they felt about these songs and artists, they told me that they feel heard and can relate to their favourite artists when they sing or rap about emotions other than love or breakups (for example, loneliness, grief, family issues, anger etc.). Additionally, in my experience,  female rappers and R&B artists add extra boldness to these feelings. They own them like an inseparable part of their being, and it teaches us something important; we are allowed to feel emotions even if they are ‘bad ones’ like overthinking or jealousy.

The best thing about women’s hip hop is that it doesn’t mirror its male-dominated counterpart, which, although undoubtedly problematic, also faces a lot of stigmas. These female artists are building a sisterhood. They feature in each other’s songs and praise each other on social media. The feeling of empowerment has sparked a lot of collaboration among female artists. They are motivated to support each other to succeed rather than tear each other down. Female rappers aren’t attempting to fit in with the patriarchal culture and instead bring their own musical influences and personalities together when they collaborate.

Hypersexuality and hyper-femininity, regardless of how women show their femininity, can be incredibly empowering. These artists are not performing for the male gaze, they are themselves (as far as showbiz lets them) they OWN themselves and their sexuality by expressing their feminine and masculine sides as well, and we can sense the freedom in their choices through their music and what they share on social media.

And what could better prove that this process is unstoppable than their refusal to work under problematic white men’s wings while calling them out on their behaviour and opening rap music to women, women of colour, and queer people more than ever before? I take this as a win. A small one, but one we can build on. We can further celebrate and praise this open conversation about our emotions, bodies, and sexuality and simultaneously continue calling out artists with sexist or violent lyrics.

We are still far from gender equality in or outside the art world, and we should definitely talk about that. But it is also important to acknowledge where we are on the spectrum and what developments have been made. Because what could be lazier than just celebrating our successes and basking in the light of female empowerment while listening to Women by Doja?

Written by Dorina Nagy. Find her most recent pieces here!