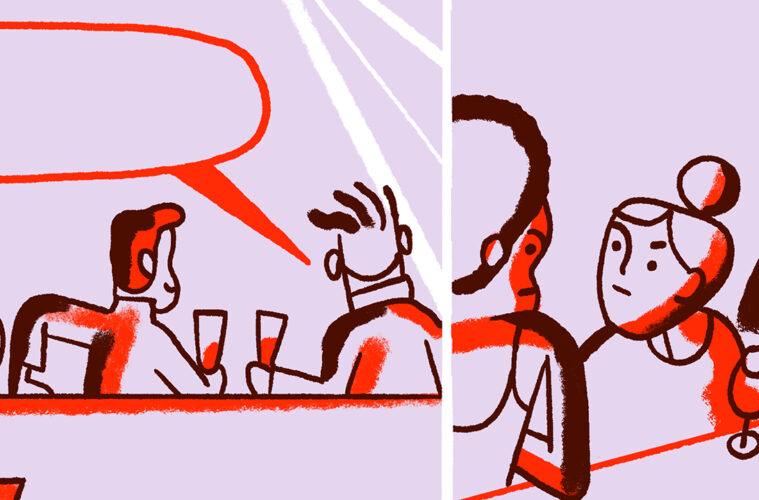 Towards a sexism-free nightlife: what can clubs do to help?

After a few sweaty hours on the dancefloor, you head up to the crowded rooftop terrace for a breath of fresh air. As you step outside, you notice a young girl is nervously laughing, surrounded by a few drunk guys making sleazy remarks. Straight away, you feel the atmosphere is uncomfortable. Should you do something? No one else is paying attention, and you’re also alone. What if they set their sights on you instead?

In preparation for All that she wants, a Feminist Festival held at Auróra between December 12-18, representatives from Budapest’s nightlife scene gathered to discuss the role they can play in preventing or managing situations like this, as well as more overt cases of harassment within their community.

Before we dive into the results of the workshop, it’s worth examining why harassment and assault are so common in this particular setting. Besides the usual suspects – overconsumption of alcohol, drug use, large crowds, and dim lighting – the workshop leaders also emphasised the importance of taking the larger structural problems at play into account.

When sexist social norms are left unquestioned, it can pave the way to more serious acts of harassment and abuse. The Pyramid of Sexual Violence aims to demonstrate this connection, emphasising that “sexual violence is rooted in power, control, and entitlement” and is, therefore “…made up of the sort of attitudes and beliefs — for example, the belief that someone is entitled to access another person’s body…because they bought them a drink – that designate certain people as ‘less than’ others.” This is why it’s important for both individuals and institutions to address not only overt sexual harassment or assault but to confront the sexist and discriminative attitudes that are at the root of it as well.

This poses a challenge for many of us. How many times have we frozen up when witnessing something suss? How many of us have let sexist remarks slide, in order to avoid confrontation, or because we can’t quite think of what to say? Let’s revisit the situation of the nervous girl surrounded by sleazy drunks. What would you do?

These answers are based on Sexism Free Night’s Bystander Chain Reaction Test, a European-wide poster campaign that depicts similar scenarios. On an individual level, these posters provide patrons with options that fall between full-on confrontation and complete passivity, offering more approachable solutions for those of us who tend to freeze up. On an institutional level, the campaign helps venues and organisations educate their guests and signal their efforts to create a safe environment where people can speak up, and hopefully ward off any potential predators.

Unfortunately, the vast majority of clubs and bars in Budapest don’t take part in such campaigns. In fact, workshop participants observed that profit-orientated club culture routinely creates promotions that instead exacerbate the problem. Some examples of this include unlimited consumption tickets (notice how the advertisements all have pictures of young women), “ladies’ nights”, disregarding capacity limits to maximise profit, and discouraging free water consumption. These conditions, instead of signalling safety, create the perfect environment for harassment and “misunderstandings”.

So if clubs can make the problem worse, surely they also have the power to solve it, right? This is exactly what representatives from Gólya, Auróra and Fekete Zaj gathered to discuss. Although these venues and organisations are known for their focus on community building and creating safe spaces, they have noticed that the issue of sexism and sexual violence is not unique to the profit-oriented clubs mentioned above.

The following solutions proposed in the workshop take the focus off the individual, and instead examine what venues and event organisers can do on a more structural level to tackle this issue:

Participants agreed that establishing a strong but simple set of house rules is crucial. Internally, it communicates the establishment’s values for the staff members to embody and refer back to in case of a conflict, giving them the power to act as a representative of the venue instead of an individual.

For example, Gólya representatives said that if they were to overhear a highly objectionable and sexist conversation between two patrons at the bar, they would not hesitate to intervene. By contrast, another participant recounted her stint at a popular bar where she was either left alone to fight these battles, or reprimanded for doing so if the people involved were regular customers.

These rules are most effective if they are periodically revisited and revised, and communicated to new staff members as a part of their training. It was also emphasised that any external event organisers should be made aware of the house rules at the beginning of the collaboration process, so that they are upheld at any events planned in the venue.

It is not only important for staff members and festival volunteers to be familiar with the house rules, but to participate in extra training or meetings about the topic from time to time, especially following any reported incidents.

Workshop participants emphasised that staff should learn the appropriate way to communicate with someone who has just been harassed or assaulted. In some situations, it’s important not to get too personal in order to avoid further triggering the victim, and instead ask questions that encourage them to think about their own safety and support network. For example, do they have someone who can help them? Is there a friend they can call to take them home? Would they like help in calling a taxi?

Although some venues may be tempted to go over their recommended capacity in order to sell more tickets and/or drinks, it comes at the cost of a safer environment. Much like on a crowded tram, predators can take advantage of an over-packed venue to get away with assault; except in this case, their chances of getting away with it are even higher. It’s most likely dark, loud, and few, if any, people are paying attention. For this reason, it is important for event organisers and venues to assess their ideal capacity – and stick to it.

In some countries, venues have been required to provide readily accessible, free drinking water for over ten years, in an attempt to encourage people to space their drinking and slow alcohol intoxication. However, in Hungary, asking for free water is still frowned upon in many clubs, especially profit-oriented ones.

Free water stations near the bar are the most effective, as there is no need to stand in line, and they can act as a visible symbol that the venue cares about its patrons’ well-being more than its profit margin.

One workshop participant pointed out the importance of staff, especially female staff, being able to exercise the right to refuse service when patrons are being inappropriate and creepy with bar staff, or have clearly consumed too much alcohol.

One of the most important factors in enacting change was recognised to be communication. These venues and organisations have the platform to reach larger audiences and influence party culture within their community through the messages they send and the causes they choose to highlight.

As mentioned above, the house rules play an important role in communicating the venue’s values not only to their staff but to their patrons as well. A simplified version displayed at the venue is one way to set the scene, but even a simple sign declaring “Racism, sexism, homophobia and other forms of discrimination are not tolerated here” has proven effective, according to one participant’s experience at a former workplace.

It is equally as important to display the house rules online as well, on the venue or organisation’s website, Facebook page, and in any Facebook event descriptions in order to continuously and consistently communicate what kind of behaviour won’t be tolerated, on the one hand, and steps that the venue is taking to protect its patrons, on the other. Festival and event organisers can also make a habit of sharing these rules in the email confirmation that comes with online ticket purchases.

On a larger scale, these venues and organisations can join forces to launch communication campaigns on the topic, such as the Bystander Reaction Chain Test posters mentioned above, or the Ask for Angela/Angel Shot campaigns which have gained popularity abroad. However, these should be adapted to a Hungarian context, and take into consideration groups that are more likely to be targeted (e.g. young people, who may not be as assertive or know their limits). Such campaigns should have strong, cohesive messages, be visually appealing, and suitable not just for venues, but for festivals and other events too. This could take many forms and would be an exciting next step to emerge from the workshop.

“Ask for Angela” in a bar’s toilet, in Vienna, Austria

Towards the end of the workshop, a very simple, but important point was made: when it comes to this issue, it is more effective for establishments to work together as a community to amplify the message not only to their patrons but to other spaces in Budapest which could be encouraged to take action too.

This workshop was organised by Auróra in preparation for the All that she wants Feminist Festival held between December 12 – 18, with contributions from representatives from Auróra, Gólya, and Fekete Zaj.

This article was written by Johanna Ács.