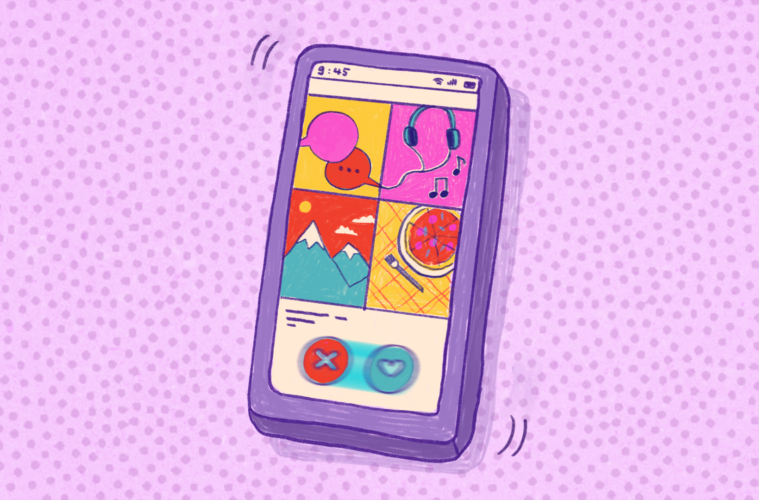 4 Fun and Feminist Ways to Use Dating Apps

I’m an avid Hinge user. By that I mean that I’ve been single for some time and Hinge is my app of choice; I’m too old for Tinder, too lazy for Bumble and not queer enough for Feeld.

As with anyone that’s been on dating apps for a period of time, I’ve hit a wall. I’m tired of putting myself out there in the hopes that some guy with a hoop earring and a branded tote bag will buy me a vodka, lime & soda at a dingy pub in Hackney.

I still live in hope that I’ll meet the love of my life in a meet-cute situation à la Hugh Grant and Julia Roberts in Notting Hill.

The closest I’ve got so far is when the waiter from my favourite falafel place in Holborn accidentally brushed my hand for a little too long when handing me my lunchtime wrap.

Ultimately, we all know that dating apps can be toxic and I’ll be the first to admit they’ve affected my own self-esteem. No one should be defined by a series of pictures and quotes on a phone screen. As humans, we are so much more than that. But it’s 2022 and this is the way things are.

If you’d told me 15 years ago my love life would feel like something out of Black Mirror, I wouldn’t have believed you.

After struggling with my complicated relationship with dating apps, I took it upon myself to try and have some fun and think outside the box. How could I use Hinge (and dating apps in general) for a purpose other than finding love? Here are some examples of ways in which myself and my friends have used Hinge in ways other than finding a romantic partner.

I have a French mum and grew up speaking it fluently. When I moved to London about 12 years ago and made mostly English-speaking friends it got a little rusty. My language skills stagnated to the level of a 16-year-old teenager with slang dating from the late ‘00s.

My name, Maïté, has several accents so I regularly get messages in French. Initially, I avoided making conversation or relied fairly heavily on Linguee to avoid turning off any prospective romantic partner with my grammatical failures.

As I’ve gotten older I’ve felt the draw to reconnect with my French identity, something I let fall to the wayside for too long as I focused on fitting in with my new British peers. What better way to do this than get a bit of practice in with the good men of Hinge?

I decided to go all in and started going on dates with French-speaking guys. I’d be upfront about the fact that my French was not quite on par but that I’d really appreciate the practice, even if it might require a little patience and quite a few ‘how do you say…’. Most people were pretty nice about it and happy to chat away in their native language. Unsurprisingly, this full-immersion method proved pretty fruitful and far sexier than Duolingo.

Improving my taste in music

Recently, in a bid to become a better person, I deleted Instagram (off my phone, I’m not a psychopath). Now, with all of the time I used to spend doomscrolling recycled TikToks, I decided that I should work on my taste in music so I can get compliments at parties. That’s a joke, but in all seriousness, music is a big passion of mine and there’s nothing I love more than curating super niche and specific playlists so any recommendations help.

So what better way is there to discover new music than by sending ‘playlist 4 playlist’ to all of my new matches?

Not only is it a strong opener for all my fellow Hackney-ites to impress me by sharing a DJ they recently discovered at an ex-WW2 Bunker club in Hamburg, but it means that I then have access to new Spotify profiles which I can listen to in my own time and curate away. Rinse & repeat baby.

Despite never having climbed a mountain in her life, my flatmate Emma’s lockdown passion became watching mountaineering documentaries after a couple of homemade edibles.

She told me there’s something about the sheer magnitude of the risks involved in summiting a mountain that drew her to them. Despite initially having a lot of titles to get through Emma eventually resorted to using a Hinge prompt to fuel her new passion. She got a number of avid responses, including Dawnwall, Aftershock and 14 peaks.

Who knew there were so many mountaineering enthusiasts in the 3km radius of Dalston Junction?!

Earlier this year I went to Rome for the first time with my friend Ellen for a long weekend. We ticked off the classic tourist attractions pretty quickly, the Spanish steps, the Trevi fountain, the Vatican and so on.

Whenever I go on holiday I always get the overwhelming urge to stray away from the beaten path and do as the locals do. There’s something about cosplaying a local so that you can feel smug when you don’t end up finding yourself in a bar surrounded by all of the other British tourists who also found out about it on the Time Out travel blog.

Hinge isn’t actually as big in Europe as it is in the UK so I switched on my Bumble profile for the occasion and added a bio along the lines of ‘if you were in Rome for 24 hrs what would you do?’ before proceeding the swipe right on every single attractive man the city had to offer me.

You tend to find locals have a lot of pride in their city and want any visitors to experience it in its full glory. After all, I’d hardly recommend any tourists to visit the Angus Steakhouse on the corner of Oxford Circus as a true reflection of the pinnacle of London culture.

We were flooded with recommendations of restaurants and bars we should check out. We eventually ended up at a speakeasy bar in Trastevere hidden behind a secret door we walked past twice before finding. We were pretty smug about this find as we sipped cocktails at the bar until a bunch of students from Bristol came to sit behind us.

I’m certain there are many other creative ways you could use Hinge other than finding your soulmate; you could find someone to help you build Ikea furniture, or get your CV or portfolio out there to network business opportunities. Just remember to respect the people you are interacting with behind the safety of your phone screen and stay kind. Though at the end of the day, you might as well have a little bit of fun with it.

Written by Maïté Owens, a French/British national currently living in London. She’s spent the last 6 years working in the media world. In her spare time, she enjoys doing workout classes, watching old movies and making lists of restaurants to try out on Google Maps.