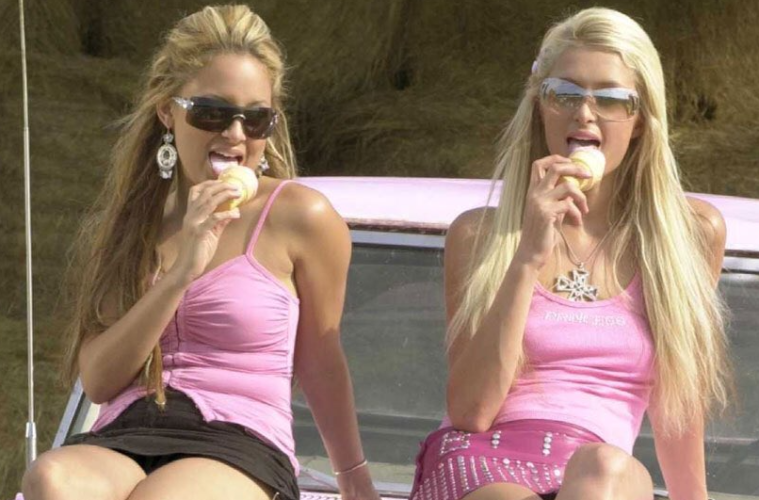 I want to forget about reality for a little while. I get tired of reading and thinking about what all of this means. Sometimes, I want to indulge in media that transports me into a void where thinking is suspended.

So, when I saw that Paris Hilton’s 2006 debut – and singular – full-length album, Paris was getting a vinyl reissue, I thought to revisit and appreciate the star’s contribution to mindless media.

I don’t mean this as an insult. And I’m not sure Paris would take it as one either.

There is something comforting about the pre-packaged image. One we can open up and enjoy without thinking twice. Like fast food. It’s not for every day, but sometimes you need a break. This is what Paris does for my brain.

I first fell in love with Hilton’s camera presence when I discovered her reality TV show with co-star Nicole Richie. The Simple Life, first airing in 2003, showcases Paris at the height of her fame. The pair are given a van, followed by a camera crew, and travel across rural and suburban United States to experience wage labor and the domestic life of “normal families”.

In the show’s pilot, the girls go grocery shopping in Altus, Arkansas for their host family. Paris looks at the list and asks Nicole, “Do you know what generic means?”

It’s farcical. And although the show is packaged for the viewer to think, “wow, look how stupid these girls are” they also seem to be in on the joke, adding a layer of self-conscious irony.

An MTV produced documentary about Hilton called Paris, Not France featured feminist and cultural critic Camille Paglia to comment on the star. Paglia says, “As a visual image she is silent. Silent in the way that we knew Princess Diana… her entire power over the world was in her still image – and through getting in and out of cars.”

In the golden age of social media influencing, creating a brandable image to monetize has become more normalized. Paris Hilton was a pioneer in this field pre-Instagram. She admits in the same 2008 documentary that “Paris the heiress is a character I made”. But the Paris Hilton image is different from online influencers: Paris the heiress is not meant to be thought-provoking. She doesn’t take herself seriously and she’s not afraid to laugh at herself.

This is why I recommend her, or entertainment with a similar “shallowness,” in these difficult times. If you need a place to start, I would like to point to a recent upload on her YouTube channel, “Cooking with Paris”.

In the video, we observe Paris sporting her #sliving* gloves and showing us how to make her “famous lasagna” (*sliving means slaying and living your best life). She struggles to get the pasta into the pot, complains about grating the mozzarella cheese by hand, and keeps the gloves on while handling raw meat. She admits at one point, “I’ve never cooked in this kitchen I don’t know where anything is”. These uploads exist alongside old music videos and clips of ads that she stars in.

Paris says in the teaser for her new documentary, which is slated for release in May, that she is done playing the character that she has been for all these years. We’re getting a look behind the curtain, at the real Paris.

But during a press tour for the upcoming film, an interviewer asks her if these new YouTube videos are the real authentic Paris we’ve been promised.

“Oh, no, that’s a character too”, she responds.

Paris Hilton doesn’t ask anything of you, the listener, the viewer. Just sit back, relax, and consume it. Like her album reissue, let go and enjoy a bubble bath of pure, overproduced pop, not trying to be – well, anything. That’s hot.