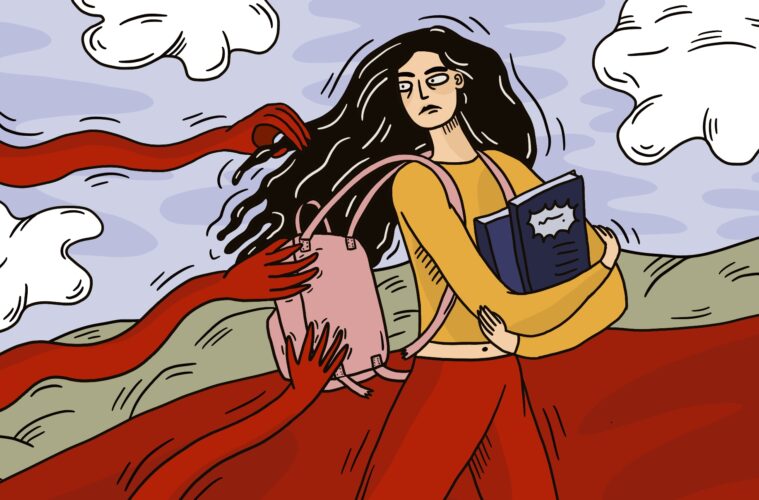 In Hungary, at least 1 in 10 schoolgirls can’t afford sanitary products. With tampon-tax higher than in any EU state and almost 1 in 5 people at risk of poverty, Hungary is gravely affected in period poverty.

I talked to social workers, teachers, doctors and women who were affected in period poverty. My goal was to reveal why period poverty is a problem, how it affects women in different parts of the country and what could be done.

Period poverty means a lack of access to period products due to financial reasons. It intertwines with the taboo surrounding periods, lack of sexual education and lack of basic hygienic standards, like cleaning stations and appropriate disposal facilities.

There is no exact number indicating the number of girls affected in period poverty. Partly because of the taboo surrounding the issue, but there’s no nationwide questionnaire either. Experts guess it’s between 10% and 30%.

“Many girls deny being poor. Especially when they have to answer in front of their friends,” Mariann Váradi, a social worker at the Hungarian Red Cross explained. She coordinates the Red Cross’s From girl to woman (Lányból nővé) program. With experts, she visits schools around Hungary to educate girls about basic hygiene, periods and sexuality. They also distribute period products. In 2019, they reached 4350 pupils.

“We got into the institutions very easily,” she highlighted. “And this signifies that this is an existing problem.”

For some girls, period poverty means that they have to use makeshift products like toilet paper, newspaper or old textiles to keep them from leaking. However, many decide to stay home when Aunt Flo visits, missing out on their education.

In a country where 20% of the population is at risk of poverty, period products are replaceable and in many households. They are less important than food or warm clothes – Anna Kovács-Pálffy, a social worker at Máltai Szeretetszolgálat explained. She is the co-founder of Nemluxustáska (Not a luxurious bag), a nationwide campaign tackling period poverty. Every December, women send them bags filled with hygiene products like soap, toilet paper and pads. In 2019, they collected 12.000 bags in just a few weeks. The founders of the project distribute the bags around the country. They get to schools, homeless institutions and poverty-stricken villages.

In Hungary, there’s a divide between big cities and rural areas. Budapest is a relatively well-developed city with work opportunities and institutions designed to help the less fortunate. Meanwhile, people living in villages can only count on themselves and the few social workers present in their area.

“The donations don’t reach this area,” said a district nurse working in the countryside who asked to remain anonymous. If they can, teachers and social workers buy products for the community from their own money. “Sometimes I can help in one place, sometimes in another.”

According to the nurse’s experience, women supplement period products with whatever they can get: old clothes, diapers, or baby-grows. She would give them clothes that have been donated to her after washing them. At least this way she knows they are clean. In this area, not everyone has a washing machine, money for soap or even running water in their house.

From a completely different part of the country, a woman told me about the first time her oldest daughter got her period. „I cut a clean sheet and gave it to her,” she explained. This is what she learned from her mother and used throughout her life. However, her daughter would rather skip school if she can’t get proper products.

Kovács-Pálffy explained that many schoolgirls experience period poverty at least once in their life. Most are afraid to go to their teachers because of the stigma surrounding periods.

Girls missing out on school due to lack of period products is a serious concern. The more they stay home, the more they miss from the curriculum.

They have a higher chance of dropping out, and less chance of going to a university. Upward mobility is harder to achieve when someone has to stay home a few days per month.

Tampons and reusable products? No, thank you.

Every woman I have mentioned before told me that reusable products – cups, washable pads or blood-absorbing panties – would not be appropriate in these poorer households.

Women would rather use socks, shreds, paper tissues – Endre Buzás, a social worker in a homeless shelter for women “RÉS” Alapítvány Női Éjjeli Menedékhely, told me.

In a homeless shelter situation, even tampons are useless. „Last year, we donated them to a dormitory,” Buzás told me.

“We don’t see how women use them, where they are, who they meet,” he highlighted.

Without proper hygiene standards and appropriate washing facilities, tampons and reusable products can be dangerous and infectious.

“In extreme cases, it can cause pelvic inflammation or toxic shock syndrome, a life-threatening infection,” Erika Egri Md, a practising gynaecologist from a small town, agrees. She often encounters women who live in period poverty. According to her, lack of knowledge is just as big as a problem as a lack of money.

Solutions that are here to stay

Another part of the problem is that tampon tax. VAT on period products in Hungary is the highest in Europe: an astonishing 27%. It is the common VAT in the country, however, a lowered rate applies for a variety of products like medication, herbal medication, books, milk, meat.

While many countries like Scotland, Luxemburg and the UK minimized tampon tax or scrapped it altogether, and many neighbouring countries like Czechia and Austria reduced the VAT on menstrual hygiene products, the Hungarian government has expressed no wishes to follow them. Tampon tax and the reduction of it is part of a bigger discussion about politics and socio-economic inequality – as Lazy Bori explained in her recent article.

Period poverty is not an isolated problem. The high price of period products and contraceptive devices affects primarily women.

Isn’t it just so wildly unfair, that one gender faces disadvantages because of a perfectly natural phenomenon? Women who most often have to stay at home with their kids miss out on workdays because they have to pay a price too high for their fertility. Some have to quit their jobs or they get fired for the number of sick days. As a result, they become more economically dependent on their partners or parents.

Not talking about periods and illnesses connected to the womb is also problematic. Things like endometriosis and Toxic Shock Syndrome are not part of the national curriculum. Most girls are raised to believe that the natural process of their body is “disgusting”, “shameful” or “dirty”.

Those affected in period poverty might feel alone, as most national newspapers don’t publish stories about period poverty, especially not the Hungarian situation. Because of the stigma around it, it’s incredibly hard to get girls and women to talk about it too.

Fortunately, there are men and women who are interested in this topic, willing to learn and to forget about the stigma. Nevertheless, whenever I post about period poverty (or periods in general) on my social media pages, I get aggressive messages or disapproving comments and I lose followers or ‘friends’. Mostly men.

However, I’m grateful that in a country, where most men deny period poverty under my social media posts there were many organisations and some women who talked to me about their situation and what they have been through.

Discussing periods in articles, school, with friends or family will not fix these problems but they might reduce them. Aunt Flo is very natural yet for too many women too uncomfortable. Let’s smash the stigma!

Researching and writing this article was possible due to the donations I received and with the help of PressStart, a crowdfunding tool supporting journalists.

Written by Lili Rutai. Check out her latest pieces here!

Lazy Women of the Music Industry: Interview with Spill Tab

A Lazy Woman’s Guide to Spending a Sunday in London