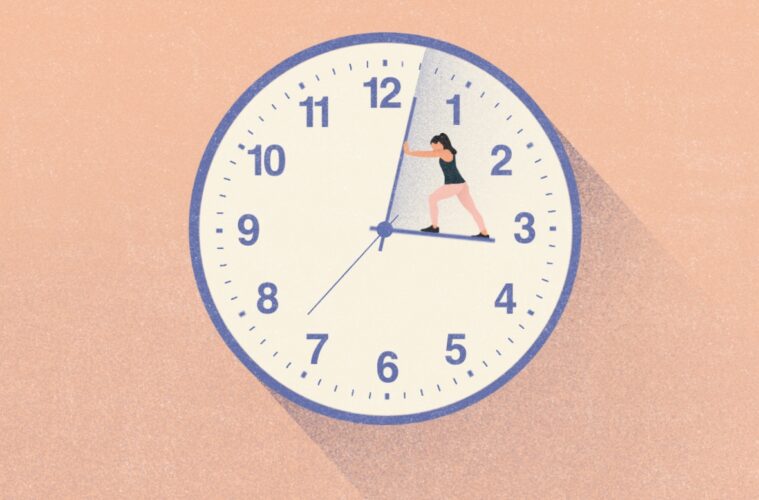 Time waits for no woman: how time is gendered 

Tick tock, tick tock; I am always hearing about that biological clock. For a while, I’ve been wanting to explore the concept of time and its gendered aspects from a different perspective to the norm; not one that centres on the womb as a ticking time bomb. Upon reading a passage in Zadie Smith’s NW, I was finally motivated to do so. In the book, one of the main protagonists reflects how on visiting her brother’s flatshare;

“[…] there was no special or chosen man in this house. Jayden had managed to find for himself precisely the fluid and friendly living arrangements she herself had dreamt of […] it was because the arrangement […] did not come bound by the constrictions of time – and this in turn was the consequence of a crucial detail: no women were included within the schema.”

I set about trying to work out whether it was just the biological clock to which Smith was referring, or whether there was a more universal connection between gender and time. Are all women destined to be forever “bound by the constrictions of time”?

Gender and time are both constricting forces. They squeeze everybody into school corridors of expectations and clanging alarm bells. Must keep moving forwards; progress is linear; next step up the ladder; next step in the relationship.

Time waits for no (wo)man.

Whilst gender and time are separately constricting, research shows that time itself is also gendered. Social policy and social science academics, Azrini Wahidin and Dot Moss (2004) explored how time has developed historically into two distinct gendered aspects, via Greek mythology. The ancient Greeks had two gods of time: the male god Chronos, god of chronology and successive time, and his sister Kairos, goddess of cyclical time. Femininity is inextricably entwined with this cyclical reproduction, the changing of seasons and the ongoing rhythm of life.

French feminist, Julia Kristeva wrote in her famous 1981 essay on ‘Women’s Time’ that “when evoking the name and destiny of women, one thinks more of the space generating and forming the human species than of time, becoming, or history.” Indeed, throughout history, men have been associated with transcending boundaries and pushing for progress: think technological advances, scientific discoveries and world explorations. Women, on the other hand, are associated with immanence: reproducing the status quo. Gender dualisms have therefore long pervaded how we think about time. In many senses, Chronos’s linear time is easier to understand, monetise and experience, and therefore, has been elevated as the more valuable category of time.

Recent feminism often challenges women to perform to expectations created by the patriarchal world, rather than recognise their own pre-existing value. In this way, “girl boss” rhetoric encourages women to aspire to use their time in a linear, progressive fashion to achieve capitalist outcomes. This often does not fit the responsibilities ascribed by traditional gender roles, which becomes especially clear when imbibing social theorist, Barbara Adam’s 1990 theory of human action as “symphonies in rhythm.” Adam speaks of the biorhythms of bodies, (heartbeats, menstrual cycles, life-span), rhythms of households, agricultural cycles, paid employment and industrial time, of historical and institutional time. If, as Adam writes, it is interlocking rhythms that constitute every task in life, those spread most thinly between the different rhythms will experience time-related stress most commonly. Women typically do not experience time in discrete, compartmentalised “chunks”, but rather play different rhythms simultaneously, thus experiencing greater felt experiences of busyness. The “girl boss” rhetoric does not sufficiently take this into account.

The undervaluing of cyclical time is most clearly seen in the care work sphere. Care cannot be “infinitely rationalised, sped up and made more efficient” because it requires ongoing attention and cannot easily be ticked off a to-do list (see Emma Dowling’s 2018 book). In Dowling’s book on this subject, she explains how it is not often possible to negotiate when care is provided or how long it will take. For example, you cannot schedule when your elderly parent is going to break their hip, how long it will take for them to recover or the amount of emotional support that will be required during their recovery. Care is also characterised by its repetitive and reproductive quality, so cannot be deferred and is costly to delegate. According to Care UK, 58% of UK carers are women and therefore, women are most impacted by this gendering of time.

It is well known that multitasking can lead to a sense of busyness and stress, however, the impact of multi-tasking is also highly gendered. Qualitative time-use studies show that feeling rushed associated with multitasking is more often reported by women (Mattingly and Sayer 2006). Academic Clare Holdsworth (2020) writes that “the tension of multitasking is intensified if it is also performed across multiple spaces, which might operate at different speeds.” As women are more often than men simultaneously active in both the public and private spheres, they are more susceptible to the guilt which accompanies performing at the wrong pace. Women report feeling guilty for overly rushing their children in order to get on with work (especially during the pandemic), but are equally conscious of performing too slowly in the workplace due to care-related distractions. Holdsworth argues this time dysphoria will only increase: the “intensification of everyday life is a relational phenomenon that continues to differentiate gendered experiences of working and family life.”

Furthermore, leisure time is generally seen as something to be earned. It is harder to earn that privilege when you are working in more than one sphere, in the same way as it would be harder to accrue annual leave if working two formal jobs. Colleagues and bosses can often forget that not all time outside work constitutes leisure time, which is particularly the case for women who often shoulder a greater proportion of care work.

One possible route for improving gender equality would be to consider how cyclical time could be enmeshed within the public sphere as a valuable enterprise. This can be done in obvious ways such as introducing menstrual leave in more workplaces, or companies more generally recognising the value of ongoing, repetitive actions in the workplace rather than being solely outcome-oriented.

Women often torture themselves for making less progress or being unproductive, be that in careers or otherwise, without recognising that time benefits the male experience. Linear time is not the be-all-and-end-all and we should not be bound by its constrictions. Breaking free of the patriarchal construction of time is extremely important to reduce the time pressure consistently felt by most women. Every second does not have to achieve something new but can repeat a previous rhythm. It is not just the biological clock that is holding us back, but the very structure the clock rests upon.

Taking the time to radically rethink time does not make a lazy woman.

Written by Izzi Williams. Check out her most recent pieces here!