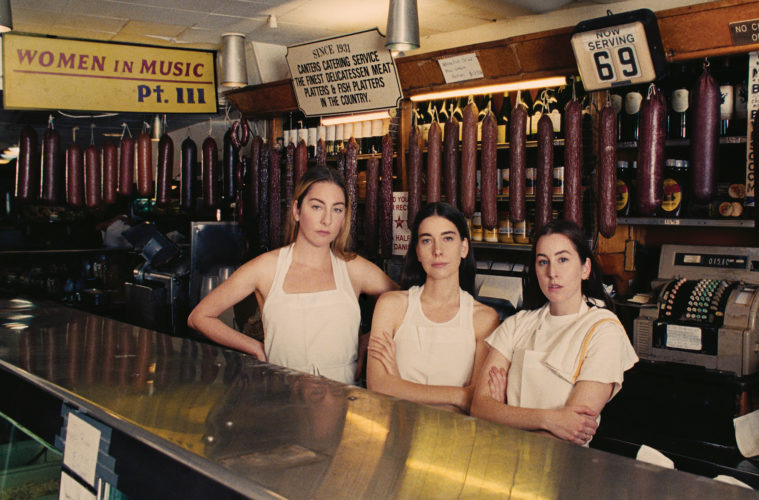 Brand new music to powerwalk to: A review of WIMPIII by Haim

After having dropped a few songs along with music videos since last summer, Haim finally treats us to their long-awaited new album Women In Music Part III (or WIMPIII) that came out on June 26th. Many people, including myself, were rather impatient about the prospect, since the songs they released prior to it turned out to be extremely catchy and well-crafted, making the album seem quite promising. I wasn’t disappointed.

I can’t say I was an avid Haim fan until now – I generally quite enjoyed their previous albums without necessarily being completely wowed by them. However, WIMPIII seems to stand out, offering a range of songs that are both topical and indicative of great musical labour. I’m not sure whether this is a side-effect of lockdown, and the way it makes anything new extremely exciting, but their early releases have become strong quarantine anthems (such as The Steps, or Don’t Wanna).

There is something refreshingly new about their songs’ honesty, which deal with the complexity of themes such as relationships, mental health, grief or simply womanhood as a whole.

Their music videos (directed by Paul Thomas Anderson) which they released prior the album, also gave us a visual taste of that blunt, raw, natural aesthetic they seem to be going for. The Steps, for example, portrays the three sisters in a very natural light, angrily spitting lipstick onto the bathroom mirror and aggressively playing the drums in their pj’s, in an attempt to defy traditional gender norms in pop music videos.

The three sisters seem to have unloaded substantial emotional baggage into this album, with Alana reportedly losing one of her best friends (which she sings about in Hallelujah), and Danielle going through a depression, a theme which recurs throughout the album. In Now I’m It, she speaks about feelings of helplessness and detachment from the world that surrounds her, “locking all the doors to (her) house”. In I’ve Been Down, she also evokes that helplessness, with spoken sentences such as “the love of my life /sleeping by my side/ but I’m still down” which highlights the feelings of numbness she is experiencing.

Toxic relationships are also discussed in most of the tracks on the album, often dealing with the recurring tension between realising that a relationship is flawed and being so in love that leaving becomes impossible. FUBT (Fucked Up But it’s True) acts as a kind of white flag, giving up on trying to leave. The song ends the album on a bittersweet note, with Danielle singing that “either way I’m gonna lose/ so I’m just gon’ keep on loving you”. This feeling seems to extend itself to the sisters’ love for their L.A. hometown, and the tension between leaving home and staying – which they sing about in their upbeat, Vampire Weekend-sounding first track Los Angeles.

Musically, the album as a whole proves to be rather eclectic, with influences ranging from 70s rock to 90s R&B, to early 2000’s indie-pop. You can find some more classic Haim songs like Another Try or Don’t Wanna, with their catchy choruses and poppy feel.

They also seem to have tried to step out of their comfort zone, experimenting with more complex chords in songs like in Man From The Magazine in which the sisters criticise journalists and their sexist, irrelevant questions.

3 AM stands out as rather different to what the Haim sisters normally produce, serving us strong 90’s R&B vibes with a touch of funk, which actually works brilliantly and suits their voices really well. A lot of work also seems to have been put into creating some great guitar riffs, especially in their more 70s sounding tracks, that strongly resemble those of bands like Fleetwood Mac (in songs like Leaning on You or The Steps), or the Velvet Underground in Summer Girl.

Overall, WIMPIII is both a vibrant and melancholic album that perfectly fits the general mood of the current situation we’re living in. It deals with topics which are perhaps even more relatable in pandemic times, during which feelings of depression, anxiety, and general uncertainty might become more prominent. Something about the warm, upbeat but nostalgic feel of the songs make it an ideal summer album, with just the right amount of girl power attitude that we need to keep ourselves going. Go give it a listen if you haven’t already!