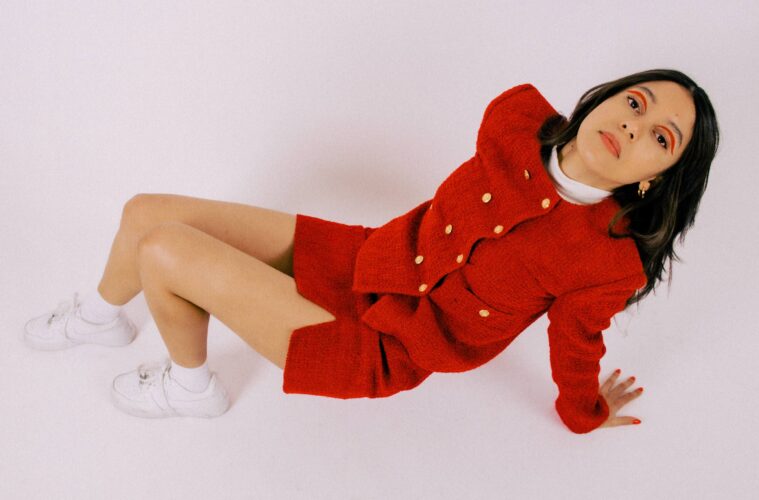 When I first heard Seraphina Simone’s latest track, Lovesick, there were several lines of lyrics I could almost immediately relate to, and I’m pretty sure I’m not the only one to feel that way.

The single comes along with the artist’s debut EP, Milk Teeth, featuring the heartfelt title track that was written in the wake of Black Lives Matter (BLM) protests in 2020, during which time Seraphina was reflecting on her own experiences growing up as a mixed-race woman between London and LA.

The entire EP is full of emotion and personality, no doubt a reflection of the fact that Seraphina writes and produces her own music, and directs the video shoots. Recently she has been touring with Self Esteem (whose inspirational conversation with Elizabeth Day on the podcast How to Fail I’d recommend listening to, when you’re done with the Milk Teeth EP). Having grown in confidence, partly as a result of this touring experience, as well as years working in the music industry, Seraphina is now launching her own career.

Ahead of her upcoming show in East London’s Paper Dress Vintage, we had the chance for a quick chat to explore her take on some key Lazy Women topics.

It seems you’ve been working so hard in the music industry for a number of years now. How do you take time out, take time to be lazy, and is this something you find difficult?

I find it hard to take days off in London without feeling a niggling sense of guilt. It’s like London has this hustle culture energy that permeates everything. It’s hard being freelance because there is no hard end to the working day or working week, you just keep going and sometimes I’ll go weeks and realise I haven’t really given myself a full day off. So what happens is I become a social hermit because the only time off I can comfortably build in is in the evenings, and as a natural introvert it’s way too easy for me to spend time on my own this way.

I’m actually currently in bed, having spent six days nursing a savage stomach bug which has been rough but has also meant I’ve spent almost a week doing nothing but lying down watching films and tv shows, and although I’ve been through the ringer I also feel really rested, which is maybe a sign that I need to get better at taking proper time off… not just a morning or afternoon here and there. I think I pushed my body to breaking point lol. Sometimes the body just makes you stop, like ENOUGH NOW! TIME OUT!

Wow, it sounds like a tough week – thanks for letting us into your recovery time for this quick chat! Given the competitiveness of the industry you work in, and the fact you attended the prestigious University of Oxford, do you feel pressure to be “productive”?

Lol yes, as above! But it’s not because I see the industry as competitive or because of Oxford. I actually think the industry is a lot more collaborative than the media portrays it as, and that bitchy girl-on-girl competition of the nineties and noughties has given way to a space where I feel like people want to help each other succeed.

It’s a healthier ecosystem if everyone supports each other, and there’s more than enough room for everyone to do their thing. The pressure I feel to be productive comes from my own hyper-perfectionism and tendency towards control, both things I’m trying to chill out on… Slow progress.

Lazy Women was a platform that launched in the 2020 lockdown period, around the time you started writing some of the music we’re now listening to. Do you think the forced quietness and solitude of this period helped inspire your writing?

Definitely. I think stillness is an integral part of the creation process – there has to be a void, a period of gestation where you’re not directing anything outwards but letting things digest and ruminate, so that they can birth new ideas.

If you keep creating and creating in this hustle culture mentality, with no space for space, then I think you run the risk of burnout or at least a creative flat battery.

It’s like the seasons, they run in cycles and we need the stillness of winter to let things germinate before spring arrives with its burst of new life. I only really understood this in lockdown, and it’s hard to maintain now that life is at full pace again but I know that before I start the next project I’ll need some time to cultivate that stillness again in order to do the best work.

Since then you’ve toured with Self Esteem, whose own music is all about being true to yourself, especially as a woman, and really looking after yourself. What have you learnt from being around Self Esteem?

I’ve learned so much from her and the whole crew in general. To not compromise when it’s your vision. To not take shit just because you’re a woman. That being authentic is way more interesting than trying to be someone or something else. That it’s important to say no to protect your mental and physical health.

That there is room for everyone to thrive. That you don’t have to be a “Good Girl” all the time just to make others happy. That it’s important to call people out on their bullshit.

Amazing! Words of wisdom for sure. Are there any other creative influences in your life worth a special mention, perhaps who could offer inspiration to Lazy Women readers too?

I remember a few years ago feeling some imposter syndrome because I wasn’t writing songs every single day, and there was this assumption that as an aspiring songwriter you should be writing day in and day out. But that’s not how I work – my songwriting is tidal, it ebbs and flows and I’ll go for periods where they’re coming thick and fast and then I’ll go through periods where I don’t write a single song in months.

It made me worry that I wasn’t good enough, and then I read Patti Smith’s M Train. She talks about how she writes in cycles, how she’s either writing, or not writing, and it’s very yin/yang in that way – never a constant stream of creating, but bursts of productivity over a few months and then several months of nothing but absorbing. It was such a relief to read, because it’s Patti fucking Smith so if SHE’s not some constant machine-like stream of productivity then it’s obviously okay.

Haha, yes, that makes it absolutely okay. Do you have a favourite song from your debut EP, and if so, why that one?

Milk Teeth is probably the one that feels the most important in what it represents – a point in my life where I was confronting some uncomfortable identity shit for the first time; and that was a real turning point in my journey of self-acceptance.

Thanks for your time Seraphina. As a final question, do you have any advice for Lazy Women readers, whether they’re in the creative industries too, or someone just looking to add a bit more creativity to their day-to-day?

Echoing what I said before, I think stillness is vital to creativity. Stillness to be with your thoughts, to come back to your body, to absorb. Without stillness, I think it’s really, really hard to access or fill up the well of ideas everyone has within them. So any way that people can build stillness into their lives will have a direct impact on creativity I think, and also on general mental wellbeing so it’s a win/win.

Seraphina Simone’s London gig on September 28th is now sold out, but keep a lookout for where you can catch her next via Instagram and Twitter.