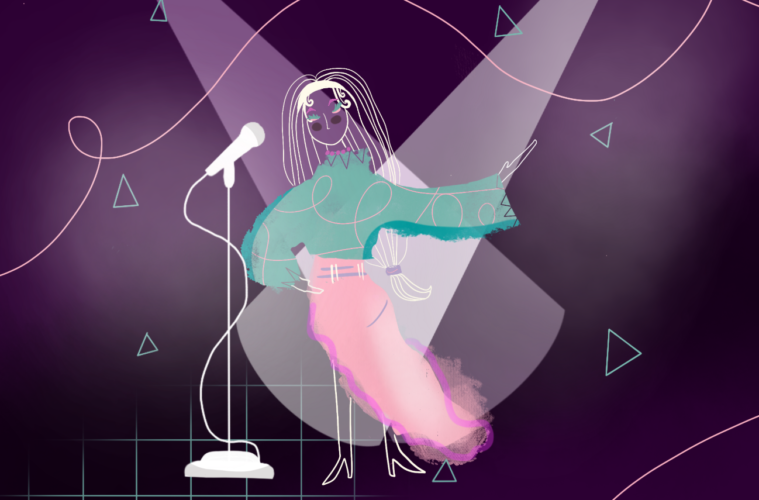 The Punchline Gap: How the patriarchy is ruining your jokes

It is a truth universally acknowledged that men get more laughs than women. According to one ‘scientific’ study, this means that men are funnier; but, surprise surprise – this conclusion has nothing to do with content and everything to do with sexism. We, the esteemed writers of this thoughtful piece, met through our love of performing comedy as students and bonded through our gripes with the industry. As two young women trying to gracefully elbow our way into a traditionally male-dominated profession, we’ve both struggled to be taken seriously as comics – both in and out of the spotlight.

But we found that the same problems continue to rear their ugly heads in the aspects of our everyday lives and careers, from Rosie’s marketing jobs to Alison’s research projects, and so we started to wonder – is there something bigger going on here? Could there be a gender laugh-gap? So we’ve conducted an extremely scientific study of our own, based only on hard facts and logic, to try to get to the root of it.

Exhibit A: The Rookie

“The first time I attempted ‘funny’ onstage, it didn’t go quite as planned. Before I had even had the chance to grace the audience with my ropey one-liners, I was approached by a bloke in the audience looking for the loo. Shocked that I was, in fact, a comedian, he sneered with what could only be described as the disdain of an 18th-century lord and in a final deafening blow said, “Well, you don’t look very funny. Best get a drink when you’re on.” Blinking back tears, I tried to mumble a half-hearted apology to the booker but it was too late, I was on. Luckily, I got through it – barely – and spent most of my precious five minutes trying to stop my hands from shaking. Before I had the chance to relegate the night to my mental file of ‘The Embarrassing Things I Think About When I’m Trying to Sleep Ten Years After They’ve Actually Happened’, I thought about what he said again that night and had a bleak epiphany; that just by virtue of my gender, I had started my set with minus points.”

Unfortunately, this is just typical of the myriad microaggressions female comics face, from Twitter reply-guys to having our own punchlines mansplained back to us. (‘Yes Dan, I know it’s really funny, I wrote it.’) And this gendered disrespect isn’t just levied at newcomers in the industry.

Exhibit B: The Bookers

Recently, a famous TV quiz show booked four male comedians alongside two female presenters for their Christmas show – and whilst these women are undoubtedly talented in their own right, the total lack of professional female comedians hardly makes for a fair gender balance. But this discrimination is just the tip of the iceberg.

Earlier this year, Katherine Ryan had to deal with harassment onstage as she hosted the NME awards. Although she accepted an apology and seemed unfazed, it’s probably fair to say that not everyone would have been as unflappable in her shoes (though to be fair, they were a magnificent pair of patent leather boots). We all laughed it off because she did, but what message does it send to nervous young comics if a woman at the top still has to contend with blatant sexism?

We can all agree that there is nothing more awkward than the excruciating silence after a punchline doesn’t land: you’re sweating, the audience is sweating, the technician is sweating (more than usual) – it’s an artistic terror that no one should have to endure, not even James Cordon. Unfortunately, that feeling is all too familiar for women who, try as they might, have much more to compete with than just ‘being’ funny.

We call this the Punchline Gap.

‘Punchline gap’ (noun): the unfortunate fact that men, on average, achieve more laughs than women because of factors beyond their control.

Women, on the other hand, find themselves faking their own laughter to placate men. Unsurprisingly, these men will rarely reciprocate.

You might think us overdramatic, but the weight of the punchline gap isn’t reserved for the stage. Have you ever made a joke and the people you’re talking to either don’t laugh, or – more existentially – don’t even acknowledge that you’ve spoken? Statistically speaking, it’s generally men – periphery characters who are usually in the ‘new mate’s school-friend’ or ‘unfortunate work acquaintance’ category. Most of them don’t mean any harm by it, they just will never find you funny and react with genuine confusion when you attempt to be so. Even if you tell the same jokes and deliver them in the same way as a (cis-het) man would, they have a sort of hardwired mental block on your humour and it doesn’t land. It’s not that it crashes out either, it just sort of disappears off the radar completely, a lot like the plane in Lost. The world continues like nothing’s wrong while you spend six lengthy seasons trying to work out what the hell just happened. And when you eventually do, much like with Lost, the apparent answers are not exactly satisfying.

Stacey Abrams, an absolute powerhouse of a politician and campaigner, said in her TEDTalk that “as women[…] we’re too often told that our mistakes are ours alone.”

We’re so ready to blame ourselves when things don’t go as planned and, in an industry that is literally built on measurable external validation, this makes for one toxic cocktail. Maybe your material could use some work, or maybe it’s gold and you just haven’t found your audience yet, but the truth is that ‘testing it out’ isn’t always a reliable way for women to assess their material. Sometimes an audience is ready for them to fail before they’ve even opened their mouths. And if they are funny, they can be explained away as an anomaly. “She was actually quite funny.” An exception to the rule.

So can we close the punchline gap?

So, the results look bleak. (Although not for the authors of this piece, who are hedging their bets by deep-diving into the world of scientific research… #WomenInSTEM). But there is hope.

Every time we diversify our line-ups, comedy outlets or TV shows, we get one step closer to closing that punchline gap.

The patriarchy is pervasive, so don’t forget to check your own biases and look for opportunities to back a healthy range of comics and content. And so, to end on a positive note, we’ve put together a list of some female-led comedy to look forward to in 2021:

Co-written by Rosalie Minnitt and Alison Middleton.
Rosalie is a comedian and writer based in Wiltshire. She won the 2020 HelloGrads Content Makers Award and is an alumn(us)a of the Durham Revue. Her writing has been featured on BBC Radio, Times Higher Education, Chortle and Funny Women. She co-runs Comedy vs. Climate Change, an initiative designed to raise awareness of the climate crisis.

Alison is a comedian and researcher based in Oxford, where she is studying for a PhD on humour in tragedy. She has performed with both Durham and Oxford Revues, and is a host of the comedy history podcast ‘Against the Lore’. Alison is also the founder of the environmental comedy project ‘Comedy vs Climate Change’ and edits the site’s blog The Dump.