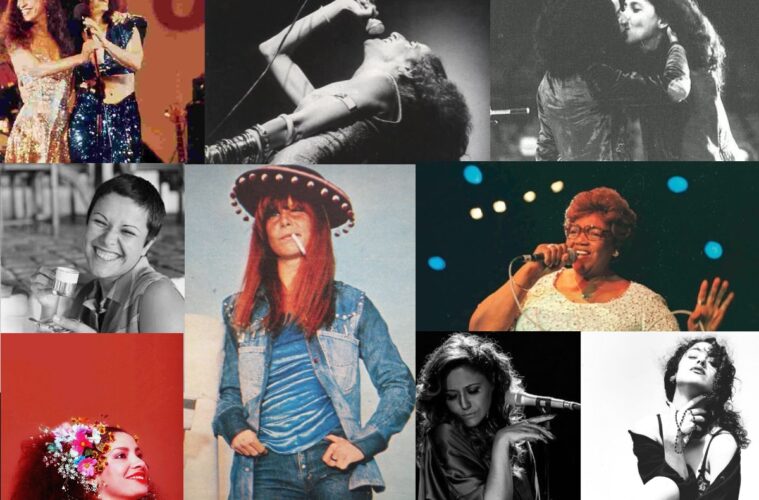 The Women of Brazilian Popular Music – strong, fierce and the opposite of lazy

Interview with Anaadi and Andréa Cavalheiro

The world-wide known Brazilian song, Garota de Ipanema (”The Girl from Ipanema”), is a universal reference of the Música Popular Brasileira (MPB or Brazilian Popular Music). Garota de Ipanema was composed by a man and mostly sung by men – but it’s a story about a woman and her beauty.

Historically, in Brazilian popular music, women were merely delegated to the role of being men’s muses and inspiration for their songs. However, at one point, we claimed our place as songwriters and performers and took the spotlight.

Nowadays, the MPB is blessed with many incredible female musicians, who faced hard challenges to reach the spotlight. There’s a lot to discover about Brazilian music history, its talents and the meaning behind its success: especially, of the Brazilian music industry’s women.

It was my pleasure to interview two incredible women and to bring them and our MPB closer to you with the fascinating stories they kindly shared below. We discussed their points of view on the music industry in Brazil, how their experiences in the industry have been shaped by being women of color, and of course, laziness.

I’ve also prepared a playlist with some classics and new talents (both with women and men), in case anyone wishes to become more familiar with the Brazilian popular music.

Q: How did your career in the music industry kick-off?

I recorded my first demo at the age of 17, after having done jam sessions at Jazz clubs in my hometown (Porto Alegre, Brazil). Then, I began studying vocal technique. I only had proper time to dedicate to music when I was 23, after graduating with my degree in Psychology. At that age, I started to commit 100% to what I do today: writing songs, making albums, recording in different projects, singing with orchestras, performing in festivals and at concerts, and so on. I started composing and trying to figure out how to unite my passions: Jazz, R&B, Soul, and Samba. All my influences are represented when I compose, and my first album NOTURNO is a clear manifestation of that.

In 2010, I acted in a movie, co-starring with Arrigo Barnabé, a legendary artist in Brazil, and created a documentary about women in music. Later, I did the soundtrack for a short movie about plus-size women. Those experiences in the cinema industry allowed me to broaden my art – nowadays, I strongly think about doing more movies.

Q: You were nominated to three categories on the Latin Grammy 2018, and won as “Best Portuguese Language Pop Contemporary Album”. How does it feel to achieve this mark as a woman, having competed against many other Brazilian talents?

It feels amazing. I feel recognized, respected and honored by this great award. Winning a Grammy is every musician’s dream. By all means, I know art is not about competition; it’s about aesthetic, identity, uniqueness. I don’t think I’m better than anyone. All the artists that featured in that same category are more famous than me, make more money and perform to bigger audiences. It makes me feel happy and honored because that award refers not only to the quality or the impact of my work; it talks about the capacity of my work to touch somebody in a singular way.

As a woman, I feel strong. I had to overcome a lot of challenges to get there and had to sometimes be harsher than I wanted in the making of this album, in the administration of my career and even in the relationships with my colleagues. All in order to be able to get the results I thought my music deserved – and in spite of what people thought of me, expected of me or wanted from me. As a woman in this field, I feel like a football player. We have to find our talents, our grace and our intelligence to strategically dribble around obstacles and get to where we need to be. I always tried to “play” with respect and love, being truthful to the values my parents gave me. Nobody is perfect, I learn through the process every day. Today, I try to be kinder with myself and with the process itself. Especially by being a black woman, I had to learn to be too tough to survive in this business.

Q: Speaking of your position as a woman, were there any situations that genre was an obstacle? Do you feel like there are enough openings for women in the music industry?

I think it’s hard to determine that. In my point of view, misogyny is structural and it’s always an obstacle. I have dealt with male musicians who disrespected me, doubted my capacity without even knowing me, and made inappropriate comments about my body. I got hit on out of context and was even touched inappropriately without giving permission. Unfortunately, in the music industry, all these behaviors are normalized. Nowadays, I have the privilege to work only with people that respect me, but it wasn’t always like this.

I believe the music industry is very open to women who follow its rules, mainly in terms of fitting in a pattern. We still need to evolve as an industry if we want to create an environment where women are a truly welcomed group. I still feel like we can’t create freely, especially in this culture of social media, followers and cancellations. We concentrate the value of an artist in their persona and not anymore in their music, and the tolerance that we have for women is way more limited than the tolerance we have for men. I feel like we charge women not only to be perfect but also to bet their whole careers and lives on that ideal.

Q: Do you feel the constant need to be productive, or can you be “lazy” without feeling guilt? What do you do to relax when you need some time off?

I spent so many years without taking any vacations, always working so hard, that I got seriously ill in 2017 from working too much. I saw 2020 and the pandemic as an opportunity to be “lazy” and feel good about it. I have allowed myself to stop and do whatever I wanted. When I feel guilty, I do things unrelated to work but still productive: cooking, doing housework, watching movies and studying French. That’s how I negotiate with my “lazy woman”, with moments of laziness, moments engaged with my personal life, and moments of work. I’m starting a Masters in Culture and Language, so my days of laziness are soon to be over! However, I think it’s crucial to slow down and allow yourself time every day to feel and be lazy.

Q: How did it all start for you in the MPB?

At first, I used to work with jingles. I had a soul band, which I started when I was 19. It was only after 10 years into my career with The Hard Working Band that I began to perform in bars, singing samba and MPB.

Q: During your career, have you felt any difficulties to be accepted, merely by virtue of being a woman? If yes, can you tell me a bit about it?

I started as a background vocalist. That was the place that they expected women to be, out of the spotlight. Back then it wasn’t that difficult to fit in. However, when The Hard Working Band started to succeed, I claimed my place as a leading singer because, in a soul band influenced by artists like Aretha Franklin and Etta James, it felt right to have a black woman represented front and center.

As a black woman, I feel like I actually face a stereotype. People ask me if I sing at the church because that’s where they’re used to seeing a black woman singing. I also had staff asking if I was the band’s cleaner, and I had to inform them that I was actually the singer. Those kinds of misjudgments happened a lot.

I also feel like there are larger demands made of women. We are required to have outstanding talent to fit in, and there’s a need to command respect – if you’re not firm and tough in an industry that’s predominantly considered masculine, it’s hard to be taken seriously. However, when you finally prove your talent, the industry won’t create a barrier – I’m sorry, but you would have to be very stupid to lose talent by only relying on genre barrier! (laughs)

Historically, Brazilian women couldn’t even claim themselves as the composers of any song. Dona Ivone Lara, one of our pioneers in the MPB, couldn’t say that any of her compositions belonged to her since it was unimaginable that a woman could compose. Now, there is a payback – a huge movement of women who not only sing but compose. I’m positive that the music industry welcomes women, maybe because it’s an industry about art, music, dance – we are receptive to everyone. Be a woman, a man, a disabled person, part of the LGBTQ community… we welcome people. We are all in perfect harmony during a performance.

Q: If you could say something to a woman who is starting out in the music industry, what would you say?

Study. Never stop studying, as a singer or as a musician – study. Take care of your voice, as well. Before thinking about performing professionally, invest in lessons of vocal technique, go to a speech therapist, focus on the melody. Master the basics and never stop seeking knowledge. There is no such thing as a miracle.