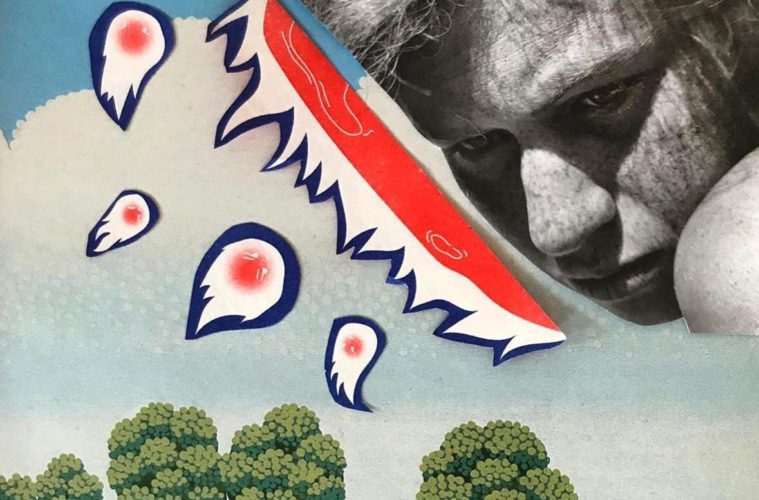 Mid-air: An essay on staying or leaving

Open windows, make morning coffee, step outside. Birds are chirping, all that shit. I think it’s funny how we like to name animals. I’ve named the pigeon that shows up on the balcony sometimes. I’m aware of the fact that it’s probably never the same pigeon. Ok, so there are 15 to 20 pigeons flying around with the name Frederick. I’m laughing to myself at the thought of two neighborhood pigeons sitting down on the same telephone wire.

“So strange I just met another Frederick the other day.”

“I’m fond of my name but I’m beginning to feel a bit cheap. A dime a dozen us Fredericks. Maybe we aren’t pigeons but are in fact, a different type of bird altogether? Maybe we are Frederick birds?”

I am not sure why in this scenario the birds take my word as god but then again why shouldn’t they.

I think of a time that a friend told me a sad story about these pigeons that used to show up in his friend’s garden. It was so cold in the winter one year that two of the pigeons’ feet froze to the iced bricks on the ground, and when they flew away their stiff little feet just snapped right off. I asked how they could go on living without their feet.

“But of course they died,” my friend said.

Or maybe it was me that assumed an immediate death for the pigeons and after my making a comment about the poor things untimely end my friend looked at me and said, “well no, they just flew away without their feet.”

“But how could they go on living without their feet?”

“Well, they couldn’t have gone on long, not being able to land properly to eat and rest and all that.”

Maybe they did live on though, with little stumps instead of claws at the ends of their snap-twig legs. And then maybe when they ran into all the other pigeons that had their feet, completely forgetting the brutal trauma of their winter-time de-footing, they looked at each other and said “Huh, we don’t have the same stuff going on waist-down as these other birds. Maybe we are a different kind of bird ourselves and just never realized it before?”

Either way it was very nice to think at least these footless pigeons had each other throughout the whole ordeal. None of them alone in their footlessness. You can really pull through a lot in life so long as you don’t feel alone.

In a way I know being confined to one place for so long a time should instigate that “wings-are-clipped” sort of feeling. But I don’t feel like this at all. I feel more like I’m hovering mid-air, refusing to land. Either for lack of a place to and, or maybe, because if I did I could possibly be met with the stunning realization that I myself am without feet. It feels much better to linger a few feet above the ground at least, even if keeping myself suspended takes more energy than is justifiable than to try and come down somewhere and be struck with the certain knowledge that I’m missing some essential part of myself. If there’s anything that could send me over the edge these days it would be a discovery like that. There would be panic coupled with the slow and stupid understanding that my days are numbered. No, it feels much better really not to know, not to go turning over that rock. Even if I’m not really getting anywhere with all this hovering at least I can outpace that.

I start to make things and take so long to finish them that they’re collecting dust before they’re complete. It’s quite disgusting to have one’s life slowed down to the point where you can pinpoint exactly how long it takes for dust to collect on a particular surface. Normally you’re running around and seeing friends, going to meetings, and then perhaps one slow afternoon you are able to notice that some dust has collected on your bookshelf and you don’t really have to shoulder the information that it took exactly four weeks for this particular amount of dust to gather. What a burden it is to know that the paper I was cutting and marking up two weeks ago now has a film of dust over it. To know I haven’t touched it since then, to know that it only takes two weeks of untouching to begin a decay. Dust isn’t really decay I know, you just sweep it off and voilá, like new. But somehow, now because there is dust on these things, I can’t possibly move myself to finish them. They will stay forever half-complete until they get covered up by other papers and canvasses, or perhaps until for some reason or another I can no longer rationalize keeping some cut up bits of paper on my desk and I am forced to throw them out.

I so prefer the part before, where nothing’s come together yet and it’s all just material sprawled out on a wooden floor. I’m reminded of years before, when I interviewed a ceramist and was so completely enthralled with him and the way he spoke (listening to the interview clips later I felt I was listening to god), and the way he kept talking about how important it felt to him just to make something with his hands that had utility. To make the plate you eat off of or the cup you drink from.

To see your lover or your child make breakfast some morning and use that plate and you can think to yourself, I made this for you, for this very moment so that you could balance an egg on toast and sit down and read the paper, or check your email, and perhaps not even look at the food as you sit and eat under the sunlight streaming in through the window and I watch and you go on living, your morning all possible by this plate I made, for you. It was a really lovely thought.

The ceramist came in to where I used to work one day, a grocery store. One of those health-food places with their own brand of reusable bags, and a cafe that bikers and yoga instructors liked to sit in with each other. He was with his daughter and their entire cart was filled with the exact things I wanted. I was ringing up some vegetables, a bottle of wine, flowers; his daughter abruptly asked could she go pick out some ice cream for after dinner? He said sure, honey, go on ahead. He and I exchanged niceties, I asked him how his work was coming along. We had a mutual friend who used the same studio space, she was doing well too. I gave no indication whatsoever that I had listened to his interview recordings more than once or twice. All the while, in conversation with him at that moment, I was only hearing the things he had already said that one-afternoon several months ago. What was with that? I wondered to myself after he and his daughter left. I’m not sure but I only know that actually, I do this sort of thing all the time.

Maybe it’s something that has prepared me for the present circumstances in a way, my ability to take an exchange from months or even years ago and somehow mix it in with my present reality. I guess I’d assume all people do this. But really if I’m to admit, my track record does not exactly speak well to my having a good understanding of other people. In fact, by doing this I probably harm people, taking something they said one time, a long time ago, and making it my entire idea of who they are, making it my own. It’s not very nice actually, really kind of denies their humanity in a way, coercing them into that static existence in my head. Static. I know that’s meant to be the opposite of dynamic, but I just think of TV static, and it’s not a lack of movement, just a movement so random and small that it can’t possibly mean anything. There’s no message to be gleaned from television static except the one you make up in your head.

Anyways, all this I, I, I. I’ll continue to make and destroy useful things. Visit with old versions of you and me. Name more pigeons. Watch dust collect. Listen to TV static. Maybe make a home of the hovering. Whether it would be a courageous or defeatist act to land somewhere, I’m really not sure.

Written by Madison Gable and illustrated with her own work.
Originally from Atlanta, US, Madison is currently a graduate student at Central European University in Budapest, Hungary, specialising in Political Science. She has a degree in journalism from the University of Georgia.