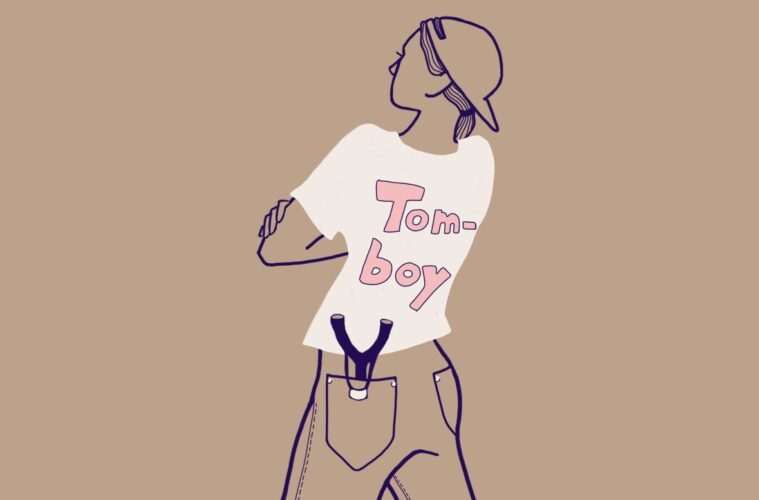 Notes from a Tomboy: how I reclaimed my femininity

I used to be (in some ways I still am) a stereotypical tomboy.

Ever since I was born, the only ‘girly’ clothes I had were hand-me-downs from my cousins. My parents used to pride themselves in dressing me in outfits that a future baby brother could wear as well. I learned to loathe pink, skirts, frilly socks and all that jazz early on. I paid careful attention even as a little girl not to expose my feminie side, not just in the way I dressed but also in the toys I played with and the games I participated in. God forbid I get caught playing with my Barbies and My Little Ponies. It’s not to say I did not have my moments when I hid under our coffee table and played with my dolls, or organised a pretend wedding for Barbie and my brother’s Action Man. What a night in toy town!

In elementary school I had the impression that boys have it easier, I started to truly feel like I was part of ‘a Second Sex’. Of course, at the time I had no idea it was a system-level phenomenon, I didn’t know books had been written about it. I also did not know at the time that girls around the world have it much worse than me, a European schoolgirl. I suspect young me would have sympathised with my underrepresented and underprivileged peers. All I knew was that I felt that us girls were treated differently, and I couldn’t pinpoint a valid reason why. I felt it in school, not being allowed to play football, being separated in P.E. and in art class, the boys learning to use tools, us girls learning to sew, even though I always enthusiastically expressed my wish to participate in activities reserved for boys. I simply could not put my head around why I wasn’t allowed to learn the things I was interested in and undoubtedly capable of doing. I felt secondary at home, like when my grandfather told me off for scraping my knees after climbing a tree because it would look bad in stockings. Not that I ever wore stockings, or as if climbing trees and scraping knees were not normal things kids of any gender do.

When I was 8, I told my mum one night that I wanted to cut my hair. Kudos to her, she took me to her hairdresser and fought back tears as he cut my hair and put my milky blond ponytail in a bag for my mum to take home and cherish forever. It’s still in her sock drawer, nearly 20 years later.

I thought changing my girly appearance would result in me getting the treatment that boys of my age received. However, nothing changed. I wasn’t magically treated the way I felt I should be, and people started telling me that girls are not supposed to have short hair.

I felt like it was impossible to please the world. I took this internalised frustration of either being too girly or not girly enough, to my teenage and young adult years. I fought against my natural femininity, I denied everything feminine to myself and felt out of place when I was forced to act or look obviously girly. I became an accomplice to my own oppression. But why was I so afraid of my own femininity? Why were those around me so dedicated to raise me to become so repulsed by my feminine traits? It’s not like the colour pink (did you know it used to be a ‘boys’ colour’?) or attending ballet classes with my friends could hurt me. Or could they?

Femininity in public opinion is often associated with weakness, vulnerability and subordination. In gender theory, these views and the resulting attitudes are called anti-femininity or femmephobia. There is representative data supporting the impression of my younger self that being feminine is in fact a cause for discrimination. Not only women, but any person expressing feminine traits faces the risk of gender policing, shaming, harassment, unequal opportunities and even gender-based violence. I don’t think my parents have read scientific publications on gender while preparing for my arrival, but I am convinced that their somewhat femmephobic strategies were based on shared views and experiences and wanting the best for their baby who would start her life with a disadvantage simply for being a girl.

It is heartbreaking to think of all the young girls trying to navigate this patriarchal world that punishes them for simply being who they are, no matter how feminine or masculine they might naturally be, and encourages them to deny their femininity as a defense mechanism. It is our job now to discover and reclaim our genuine identities, however we want to. In fact, I believe we’re already headed in the right direction.

It has been empowering to see on TikTok during lockdown, for example that girls and women started experimenting with their personal appearances: shaving brows, getting buzzcuts, not wearing bras and so much more, whatever floats their boats, distancing themselves from the expectations of traditional performative femininity.

There were teenagers and adults exploring their gender and sexual identities for the first time in their lives, standing up for body positivity, feeling safer without having to venture out to the often threatening outside world and finding a supportive community online. Although just lurking and never posting (I’m so not cool enough), even I found comfort in observing this community of people growing in their confidence and learning to embrace their true selves. Even though little girls are not (or at least should not be) on TikTok, I strongly believe in the positive ripple effects of these trends and I hope that the teenage girls and women rejecting stereotypes and exploring their own approaches to femininity today will become positive role models to upcoming generations of girls in the future. I am rooting for an emergence of more empowered and gender-conscious mums, cool aunts, teachers and inspiring figures setting positive examples in the lives of these little girls.

There is no single right way to be a woman, and there is no single correct definition of femininity. It is a subjective experience that should be free from the dated expectations of society and others. It should not be a means for control and discrimination. Discovering your own kind of femininity should be exciting and freeing, rather than stressful and anxiety-filled as it was and in some ways still is in my experience. I’ve been thinking and journaling a lot about what makes me feel feminine, what helps me embrace my true self, a unique cocktail of feminine and masculine. I invite you to join me in this quest, let’s embrace our traits that we might have been keeping buried deep down within ourselves.

Written by Anna Tolmayer.
Anna’s LinkedIn bio says “tirelessly working towards positive change”, which is mostly true, but sometimes she gets tired or just feels lazy. She’s on a journey to define herself as a woman in her own right while pushing the traditional boundaries of femininity and smashing the patriarchy when she feels like it.