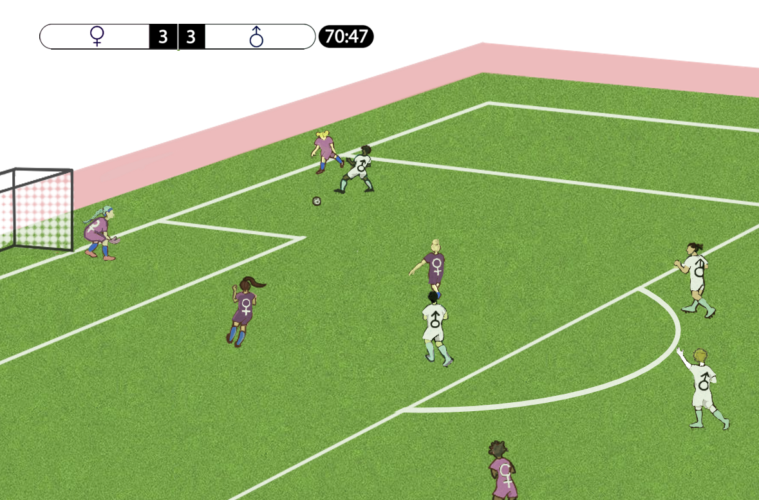 Setting our pretty little feet on the pitch

… but what if the shoes are cleats, and the world is the pitch?

I have been a huge football fan since I was little. The whole ritual of going to the stadium to watch my team’s match, becoming frustrated if they lose and celebrating championships has always been a significant part of my life. However, it often wasn’t comfortable to be a woman in this massively male-dominated environment.

There’s an old phrase which men use to discredit women who like football: “do you even know what being offside means?”. As if our IQ was not good enough to understand the basic concepts of football. It’s a (not so subtle) way of claiming the pitch as theirs, and stating that we’re only allowed to set foot in it to “bring beauty” to the stadium: to dress in super tight football t-shirts or cheerleading uniforms or to accompany our boyfriends to the matches. Nothing wrong with doing any of that – just wrong to assume that’s all we can do.

Women belong not only in the bleachers but also on the pitch – which we can dominate just as legitimately as men.

Female players have been, for too long, confined to the bench. Despite delivering results just as well as (sometimes even better than) male players, female players hardly ever receive the acknowledgement they should. Not to mention that they’re usually paid less.

Not long ago, Brazil announced equal pay for men’s and women’s national football teams. This was seen as groundbreaking progress for the country’s female football history, despite being something that should have been done a long time ago (for Portuguese speakers, this video explains the situation perfectly).

Sadly, the list of countries that have established equal pay for men’s and women’s teams can be counted on the fingers of one hand: Australia, Norway, New Zealand and recently, Brazil and England.

In fact, there were huge protests in the US during the World Cup 2019, when the women’s team took legal action against the US Soccer Federation, claiming a gender pay gap. Despite substantiated evidence, the claim was dismissed by the court in 2020.

What are women fighting for?

Some may argue that women’s football doesn’t deliver the same economic output as men’s football; as such, women footballers do not “deserve” equal pay. However, the problem runs deeper than that.

Female players do not fight this battle merely for the money. It is, as most women involved claim, a structural issue that needs to be aggressively combatted in order to be changed. Aggressively, nowadays, usually requires a lot of money.

The US Soccer Federation stated male football players “requir[e] a higher level of skill-based on speed and strength” than do female players. That couldn’t be further from reality, especially considering that female players also face distinct challenges relating to their performance outside the pitch. This includes topics such as eating disorders and menstrual functions, highly related to women’s health.

On the bright side, it’s evident that women’s football is now finally becoming a subject of interest, both to women themselves and to men. It is now possible to observe numerous initiatives to promote female football, such as Women in Football and This Girl Can.

Little by little, women are shaking up the sports industry and proving they belong in all facets of sports – regardless of what’s traditionally “feminine” or “masculine”.

We’re not just pretty faces or invented sporty girls obsessed with fitness (again, nothing wrong with that).  Women can cheer from the bleachers with true passion; women can play an exceptional World Cup (one that hopefully, soon, will be as acclaimed as the men’s competition); women can break records — and they will continue to do so long after an article on this topic is no longer needed.