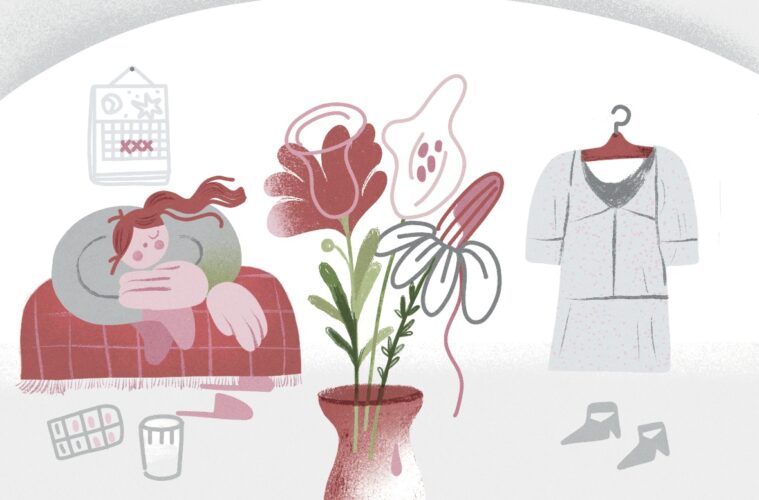 Once a month, women at work put on their top hats and perform a Fay Presto-style magic show. Bloodstains disappear behind jumpers we tie around our waists. Tampons and sanitary pads nimbly flick through our fingers like cards we conceal from the public eye. And just like an illusionist would put their hand through fire without twitching an eye, we silently work through period cramps. Periods simply don’t exist in the daily 9-to-5, a daunting reality for many who suffer medical conditions related to their menstruation.

Last week, the Spanish government approved the draft law proposal that would, for the first time, grant women (and everyone with a uterus) the right to menstrual leave for incapacitating periods.

In practice, this means that women with medically recognised painful menstruations will be entitled to leave for as long as they need. To avoid discrimination, employers will not be allowed to ask women if they suffer from incapacitating periods during interviews, nor will they be able to fire them for it. The State will compensate for all related costs incurred by companies.

This is great news for all women. Finally, a women’s health problem that has been over stigmatized and under-researched is taking its rightful place in the list of pathologies recognised in the workplace. In the world, only four countries have recognised this right for women, and Spain would be the first in Europe. A trailblazing decision that is already inspiring others to jump on the bandwagon. However, the new proposal did not come about without sparking intense debate and harsh online opposition, as it often happens when it concerns granting basic rights to women. In that case, the concerns of commentators about an objective assessment of pain levels were but a fig leaf for their true worries: that women could abuse their new right to chill and benefit from undue leave. In other words, to be lazy.

The truth is that despite the stigma, shame and silence surrounding menstruation, period pain is real and it has its consequences.

Research has found that menstrual symptoms lead to nearly 9 days of lost productivity through presenteeism every year. Furthermore, one in five young women miss school or university every year due to period pain with negative impacts on academic performance both at school and during higher education.

What we know to date is that primary dysmenorrhea, or common period pain, affects 45 to  95% of menstruating women. In other words, a large number of women suffer from debilitating pain simply from having their period, not from having a pelvic pathology. Others who suffer more severe and often disabling pain can be experiencing disorders and pathologies such as fibroids, ovarian cysts or endometriosis. Endometriosis, for instance,  affects roughly 10% (190 million) of reproductive age women and girls globally. Although this disease has historically remained in the shadow of research and conversation, women in the public eye who suffer from it are increasingly speaking out.

The possibility of an abuse of menstrual leave due to subjective pain standards is thus a false debate.

Severe pain and discomfort are well-documented symptoms of chronic pathologies such as endometriosis. In the case of primary dysmenorrhoea, it is true that pain is a subjective experience. But there is no nondiscriminatory reason to mistrust medical judgement. Let’s not forget that only GPs are qualified to grant menstrual leave. And we already trust them to assess entitlement to medical leave for various common pathologies such as lower back pain or migraines – whether suffered by men or women. It seems like getting around a medical sign-off would be a lot of work for a lazy woman.

Another argument against the new menstrual leave is that it may harm women’s access to the labour market because of employers’ fears of regular absences. In Japan, for instance, knock-on stigmatization effects are real. While women are entitled to menstrual leave, reports yet show they rarely use it as it can be seen as a sign of weakness.  Loopholes will arise, though, and perhaps the greatest negative effect could be experienced by women under precarious temporary contracts, whose renewal could be affected if they make use of the menstrual leave. Depriving women as a whole of menstrual leave rights due to the possibility of an insidious form of discrimination, however, would be unfair.

Efforts should rather focus on tackling pervasive discrimination and defeating the stigma around period pain. To this end, and to allow other basic health rights for women to emerge, more and better-funded scientific research on women’s health is a prerequisite. However, while we have sophisticated treatments for erectile dysfunction, the best a woman can hope for to address her menstrual pain are painkillers or hormonal contraception (with its well known secondary effects, including a loss of libido. Ah! The irony!). Needless to say, there is a need for a  serious conversation about gender bias in scientific research.

In short, far from being lazy, women have historically carried the weight of a pain they had to accept as ‘normal’.

We can happily celebrate news like Spain’s new proposal, yet governments elsewhere shall stop dragging their feet and start a conversation.  Menstrual leave is only the beginning of a long list of pending basic rights that we still need to conquer (or sometimes recover). Next on the list could be period poverty, yet another big elephant in the room.  Rest assured that for this, lazy women have a lot of energy in store.

Written by Sara Ramos.
Sara is a keen writer and proud feminist currently based in Paris, where she works at the OECD. She holds a BA in International Relations from King’s College London and a Masters in Environment and Development from the London School of Economics. She loves dancing to all sorts of music, trying out new restaurants, swimming in the Mediterranean sea and writing short stories.