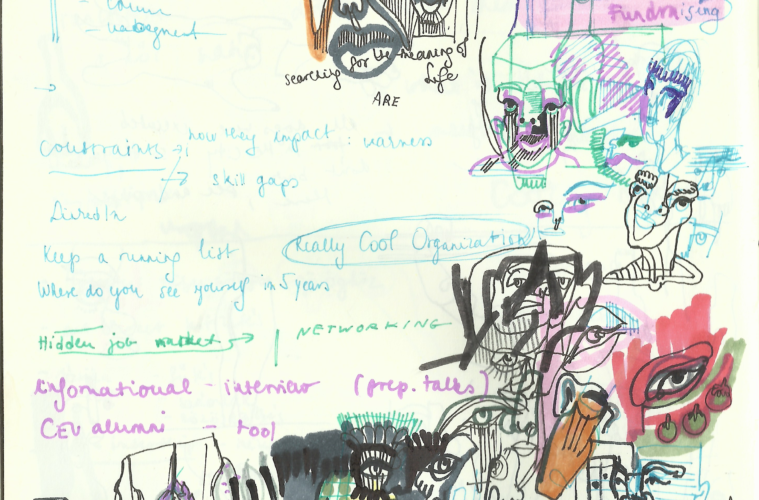 Has our obsession with productivity gone too far?

Being at CEU, you get used to the constant feeling of being all over the place. As an MA student, life feels incredibly unstructured yet fast-paced at the same time. There is no such thing as ‘switching off’ unless you specifically tell yourself to take a break. But of course, if there’s always something to do, you wouldn’t want to waste time, would you? I often feel that my ‘time off’ has to be spent efficiently as well. Whether that means reading a book, socialising or endlessly scrolling the news, the idea of being productive or in other words, not wasting time grants me a sense of achievement. My leisure must somehow contribute to my ‘self-development’.

Recently though, I began to feel that my every move has been overtaken by my Google Calendar. In-between classes and last-minute, late-night essay sessions, an occasional notification pops up on my phone, instructing me to chill. I put on a quick facemask and click on the ‘done’ button. But here’s my problem: the satisfaction I get from the simple act of ticking chill off my to-do-list is much greater than what I get from the activity itself. The same goes for finishing podcasts, films or books. I think I have become obsessed with the idea of productivity.

The more new things I watch, read or listen to, the merrier. Did I like the film? Of course. But would I watch it again just for the sake of enjoyment? Never. During lectures, I divide my laptop’s screen into multiple simultaneously open tabs: paying attention only to the lecture is luxury when my phone sends me a news update every 5 minutes. While I am falling asleep to a list of pre-downloaded podcasts on daily news and other interesting topics I didn’t have time to think about during the day, I am somewhere deep down hoping that my brain will just magically incorporate the information I am listening to while asleep.

I cannot help but wonder, is this really what productivity has come to mean? Are we truly supposed to keep up with the world this way? Or have I been wrong all along, and today’s obsession with being productive indeed gone a step too far?

Obviously, it is an immense privilege to have so much information as well as time available. I cannot deny that I am typical millennial with a short attention span who prefers to shop online as opposed to the real-life hassle of trying things on. I genuinely enjoy social media and the seemingly never-ending inflow of newness. Moving to the UK at the age of 18 without adult supervision perhaps did not help either; I have been easily charmed by the perks of Western capitalist-individualism. However, the privileged nature of the problem does not make the mental consequences of the never-ending cycle of productivity any less real.

As journalist Blauw, numeracy columnist at The Correspondent (an online media platform aimed at reforming the way we consume news) argues, our efficiency-mania has been facilitated by the ever-increasing automation and the endless inflow of brand new apps. Name any ‘problem’ in your life: the chances are that there’s already an application out there for solving specifically that issue. Efficiency and productivity also imply that we want to get a task done as fast as possible and move on just as quickly: this is the nature of our world, where the pace of everything is dictated by tech giants, unceasingly working on increasing the speed of the Internet and of our smart devices. Yet to quote Ezra Klein,

“…technological wonders do not seem to have made our lives or societies more wonderful. Depression, anxiety, loneliness, drug overdoses, and suicide are rising. Productivity growth has slowed. Income inequality has skyrocketed. Politics is more bitter and more tribal. Donald Trump is president of the United States. Something is wrong.”

My own worries fit into this larger socio-political narrative: how can we expect our democracies to flourish when all we care about is output? Just as democracy’s inherent value lies in the processes through it comes about, our individual happiness is also influenced by the manner of our achievements. I can buy a fancy facemask to treat myself, wash it off after 10 minutes and tick off ‘relax’ my to-do-list. Will this make me feel more relaxed, or more in the present? I doubt it. Did I support capitalism with my actions? Definitely. This is essentially the gist of Jenny Odell’s book, How to Do Nothing: Resisting the Attention Economy: in today’s world, attention is our most precious resource. As capitalism’s sneaky ways of granting us instant gratification, we actually forget to use our attention for meaningful social and political action. Thus the best way of resisting the system aimed at exploiting our attention is by doing nothing.

While Odell is ultimately right, doing nothing is not only easier said than done, but also is a huge privilege that most of us can’t afford. What we can do though is to divide our attention less, and instead of giving our attention to virtually everything treat it as a valuable resource. Just because it’s scarce, it doesn’t mean that it has to be focused on new experiences only. Recently I have begun to embrace ‘the unexpected joy of repeated experiences’. I have realised the hypocrisy of refusing to watch the same movie twice while blissfully listening to the same song on repeat or going to the same takeaway restaurant every day. Coupled with the sense of soothing familiarity, there is undeniably something sweet about noticing things in a movie or book you did not for the first time. In a world where Netflix’s biggest competitor is sleep – and who hasn’t fallen asleep while series kept playing on autoplay into the morning – I encourage and congratulate everyone for at least trying to resist the chase for the unfamiliar and for finding novelty in the comforting known.

(And it’s done, I’m thinking. I can finally tick ‘WRITE ARTICLE!!’ off my to-do-list. What a productive Saturday morning. I’ve got a long way to go.)

This article was originally published in CEU’s magazine, The Stand.

Written by Zsofi Borsi.
Originally from Budapest, Zsofi pursued her BA in Durham, UK and spent a year living and working in France. She is currently a master’s student at CEU in Budapest and works as a part-time political communications assistant for the I. district of Budapest. She is interested in discourse analysis, conspiracy theories and feminist theory. When she isn’t busy managing Lazy Women, you can find her relentlessly making Spotify playlists or reading a great novel on her balcony.