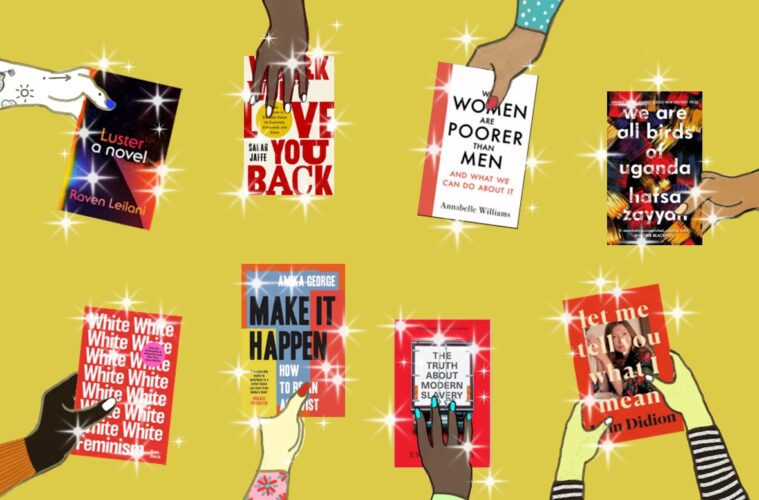 Feminism, fiction and politics: new books to read in 2021

Fiction, feminism, economics and politics. The Lazy Women team has been keeping an eye out for the latest book releases.

Joan Didion: Let Me Tell You What I Mean

One of the most prominent journalists of the 20th century, Joan Didion returns in 2021 with a collection of previously unpublished works. She is the author of classic novels like Slouching Towards Bethlehem, an essay collection accounting the 60s California, The Year of Magical Thinking and Blue Nights, both nonfiction books about grief. There’s even a Netflix documentary about her life and work: The Center Will Not Hold.

For decades, she was the archivist of the Californian seaside’s mood and one of the first practitioners of New Journalism – a way of journalistic writing with a hint of literary style, a genre very popular in the 60s. Her journalistic writing is vivid, sharp and rightfully compared to the best literary writers of the century.

In Let Me Tell You What I Mean she writes about a Gamblers Anonymous meeting, a WWII veterans reunion, Marthy Stewart, Ernest Hemingway and Nancy Reagan. Published on the 4th of February, it has already achieved some excellent reviews by Vox, The New York Times and The Oprah Magazine.

Best deal: £13 at HarperCollins (30% off from the first order if you sign up for a newsletter)

Former editor-in-chief of Jezebel, Koa Beck published her first book in January 2021. White feminism explores how feminism shut out marginalised groups from its discussion and its agenda through elitism and racism. The publication follows the worldwide recognition of the BLM movement, but Beck doesn’t only focus on women of colour. Trans women, Native Americans, Muslim women are also included in the book, praised by authors and feminists like Gloria Steinem.

Annabelle Williams: Why Women Are Poorer Than Men and What We Can Do About It

Why does the NHS spend more on Viagra than on single mothers’ health? Where are female CEOs from the top100 UK companies? Why do women make 60% more unpaid work than men? What about tampon-tax, pink tax and the pay-gap?

Annabelle Williams, a former financial journalist for The Times discovers the economic inequality of the sexes in her debut book, Why Women Are Poorer Than Men and What We Can Do About It.

As the title recommends, Williams wanders around the reasons for the wage-gap and other inequalities, as well as recommends solutions to this age-old problem. Within and beyond the glass ceiling, she researches the financial side of feminism. Publication date is in March 2021, but this one is worth a pre-order.

Best deal: pre-order it from Blackwells for £13.19

Amika George: Make it Happen: How to be an Activist

Reviewed by Malala Yousafzai, including interviews from Deborah Frances-White, host of The Guilty Feminist podcast; Adwoa Aboah, founder of the Gurls Talk network and podcast, and Scarlett Curtis founder of The Pink Protest, this book is a game-changer for a young activist.

Amika George played a major role in scrapping the tampon-tax in the UK and the change of policy regarding the product distribution in schools. Only 21 years old and a student at Cambridge University, she is one of the most prominent activists in the UK. Her book, published in January 2021, has already gotten a lot of praise.

Best deal: £13 at HarperCollins (30% off from the first order if you sign up for a newsletter and free shipping in the UK if you order it with Joan Didion’s book)

A provocative debut from the American writer Raven Leilani. Luster discovers the modern life of a self-acclaimed ‘office slut’ and of being in a relationship. Edie, a young woman in New York has a boring job, has given up painting, finds herself not attractive for men and has had a series of disastrous relationships. Eric is a middle-aged man in an open marriage, with underlying alcoholism, a controlling wife and an adopted daughter. Their bizarre relationship takes a turn when the wife invites Edie to stay in their home.

Luster is a great read, funny, awkward and heartbreaking at the same time. It perfectly encapsulates an uncomfortable feeling of uselessness and hopelessness, art, love and New York.

It was published in January with great reviews from Zadie Smith and Candice Carty-William.

Best deal: £15 at Waterstones for a signed edition.

Hafsa Zayyan: We Are All Birds Of Uganda

Set in the 1960s Uganda and the present-day London, this book explores grief, tragedy, belonging, as well as racial and generational divides. Sameer, a successful young lawyer, feels empty even though he is living his dream. When he has to go home, he starts to discover the family history he never knew. 50 years earlier, Hasan, a business owner, finds himself in a difficult position after the death of his wife and a regime change endangering his business. Their fates intertwine in the book.

Already nominated for the Stylist’s Best Fiction award in 2021, the book is featured on The Independent’s January Book of the Month list and The British Blacklist: January To Be Read List.

In 2019, over 10.000 possible victims of slavery were found in the UK. From fast fashion to the beauty industry, ‘modern slaves’ are everywhere – or are they? What if the term is just a political tool, moral cloak, or an excuse for the poor handling of migration?

“… rather than offering a solution to the problem it seeks to name, modern slavery is a misleading way of talking about exploitation that may help create more problems than it solves.” – Emily Kenway writes in her Guardian article about modern slavery.

Her complex take on the issue was published in January 2021. The Truth About Modern Slavery is a critical, very political and challenging read about a topic we barely knew before.

Emily Kenway is an activist, public speaker and writer, with previous publications in The Guardian, The Independent and Huffington Post. She recently appeared on the Weekly Economic Podcast to discuss modern slavery and her book.

Sarah Jaffe: Work Won’t Love You Back: How Devotion to Our Jobs Keeps Us Exploited, Exhausted and Alone

Exhaustion and deprivation from work are extremely trendy topics nowadays: with lockdown measures, many feel tempted to work 24/7. There is no such thing as off-day, no holidays or even nights out. Is it worth it?

Sarah Jaffe explores the world of work through unpaid interns, professional athletes, teachers and domestic workers. She points out how less work can give one more satisfaction and in the end, more happiness.

A very lazy book about rest, it’s a critically acclaimed work with reviews from The Observer, Financial Times and Teen Vogue. Out in January 2021, Work Won’t Love You Back might be the most useful book for the next few months.

Written by Lili Rutai. Find her most recent pieces here!