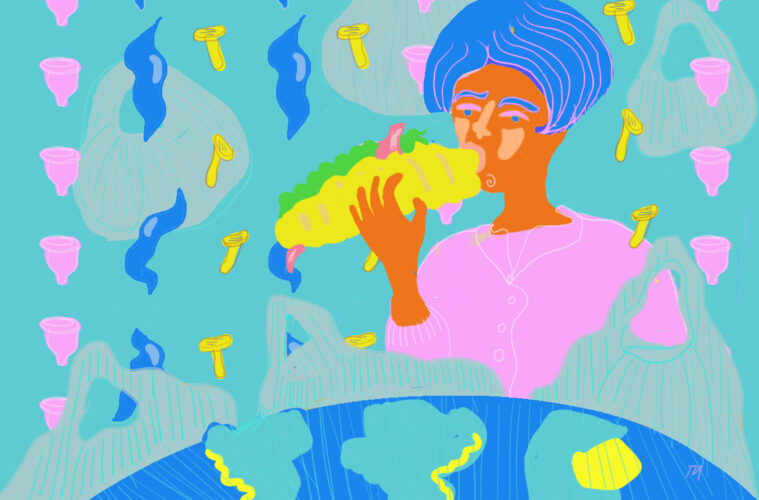 I ate a pastrami sandwich the other day. I’ve never had one, and I was stressed from work and starving. It was disgustingly delicious. It was so good I almost forgot why I have been a vegetarian for the past six years. Once the final bite of that sandwich was digested, I felt guilty.

I am a person that takes pride in attempting to live my life based on my own integral values. I love animals and I am scared about climate change and have been vegetarian for years for those reasons. I want my everyday actions to reflect my existential concerns.

Whether it be bringing my own bags to the supermarket, being meticulous in my recycling or shopping for vintage clothes, I like many young women nowadays feel like these actions take back some control in a world that seems at times too out of our hands.

It is clear that politicians and executives are moving at a snail’s pace in implementing climate change targets, whereby the consequences of their actions will largely affect us young people in the world. So, because we are not the President of the United States or the CEO of Shell, we take back control of issues that we care about in small and controllable ways. This is resulting in a notable shift in recognising the importance of weaving a value system into our purchasing power. The personal becomes political.

Having said this, sometimes I need to take a hard look at myself and the hypocrisies of my actions in this belief system I am supposedly living in. Values – which values! I ask this to myself regularly while lying in my bed spooning Nutella out of the glass watching Keeping up with the Kardashians in my Primark pyjamas.

I feel overwhelmed in trying to keep up instead with what often feels like obligations to exist as a young, conscious person in this modern world and taking effective individual action.

This feeling ties into my concerns about the larger conversation on the effectiveness of fighting climate change on an individual basis versus focusing on collective actions from governments or large corporations, and the role of women in this conversation.

One small step for woman, one large step for mankind?

Some say that focusing too much on individual action leads to ‘eco-consumerism’. This may ease our everyday individual guilt but has little impact on a larger scale, as it distracts from the real action that needs to happen at the government and corporation level (seeing as one hundred companies alone are responsible for 71% of greenhouse gas emissions since 1988).

Nevertheless, it is also true that changing consumption patterns on a large scale can influence companies to change their production patterns to more sustainable methods and governments to take climate action.

However, I cannot help but think that too often the women’s side is being left out of this debate. Not only are we the ones facing the most consequences from climate change, but as the traditionally assigned ‘homemakers’ we are also the ones placed with the most responsibility in individual action against climate change and thereby the most guilt.

In very binary terms, it is a fact that climate change affects women more than men. UN figures show that 80% of people displaced by climate change are women. Women and children are 14 times more likely to die in a disaster than men: out of the 140,000 casualties of the 1991 cyclone and flood disasters in Bangladesh, 90% were women. Furthermore, extreme weather events lower the life expectancy of women more than men, for example during the 2003 European heatwave, more women died than men.

The historic socio-economic situation of women has placed us in a contradicting circumstance. Prevented from joining the workforce and instead staying at home and faced with daily housekeeping choices, has led to the fact that on average,  we pollute significantly less than men, but are more concerned about the issue. Studies confirm this:  women travel less, consume less meat, recycle more, and are more likely to support environmental regulations. As Laurie Zoloth puts it: “Men in the global north are those whose behaviours are most polluting, while women in the global south are those who will face the worst consequences of climate change, despite contributing the least.”

This of course also links to rigid gender roles in our society which seep into individual climate action (for example that men are scared to use reusable bags out of fear they will look gay). However, some have highlighted that women too are complicit – one need only mention the trillion-dollar beauty and fashion industries, both of which create an astounding amount of waste and environmental destruction.

The business of selling values

However, mentioning these large industries also ignores the fact that for years, companies have been gnawing away at women’s insecurities and providing the perfect products to rectify our cellulite, hairy legs and imperfect skin. Thus, while many female-led companies are out there providing great products, I can’t help but feel that ‘climate neutral’, ‘recyclable’ or ‘clean’ is just another buzzword particularly targeted at women to buy more things.

Companies have figured out that we care about this more, and like with our physical insecurities they are using it to their advantage. The problem is this creates an added amount of responsibility and guilt on women, rarely talked about.

I am tired of receiving Instagram ads for period underwear for the 10th time this week, that are not only way out of my price range but seem much more impractical than the disposable pad/tampon situation I’ve used all my life. I am tired of trying to find the perfect jeans for my abnormally long legs at a thrift store, knowing I could pop into the nearest Zara and find the right fit. I am annoyed at myself for not preferring sustainable options: I find it impossible to use the period cup after multiple tries (how the hell is that thing meant to be comfortable?) and I hate the way the natural shampoo bars don’t clean my hair as good as the normal plastic bottle option. I feel guilty about all of this.

But, I also feel exhausted in trying to live consciously in a world that is not designed for this type of living. It is easier to buy disposable tampons and not have to wash out your period underwear each night. Easier to shave your legs with a disposable razor than cutting yourself on the safety razors. Easier to pick up a moisturiser in a plastic bottle at the drugstore than finding one in glass. Not to mention much cheaper. Due to their ethical and smaller quantity production, ‘green’ products sadly oftentimes remain more expensive, taking choices away from a large group of consumers. This not only further widens gaps between socio-economic classes but also creates the illusion of climate-friendly choices being elitist actions, deflecting from the fact that this is an issue that affects every one of us.

For years companies, supported by government policies, have offered women products that have made our lives much easier. But, the time has now come for those same companies to innovate: to realise their past practices have come at an enormous cost to humans and the planet and change their habits for the people it is going to affect the most.

Hereby, I am not absolving individuals or women therein of any responsibility for combating climate change. The youth climate movement largely started with the actions of a single Swedish girl and I am well aware of the power of one’s voice both online and off in shifting minds and government policies. Ultimately, lasting change can only happen with the combination of both a sense of individual responsibility and large scale collective top-down action, as both mutually reinforce each other.

I am instead arguing for a collective shift in guilt. I want to live in a system that is designed for me as a woman to make the right everyday choices about the environment. I want governments and companies to start feeling the same guilt I feel for forgetting my reusable bags at home. And then I want them to take action. Only then real change can happen.

Until then, I will try my absolute hardest to stick to my values. But I choose not to feel guilty anymore. Even if that involves eating an entire pastrami sandwich every once in a while.

Written by Una Connolly. Find her most recent pieces here!