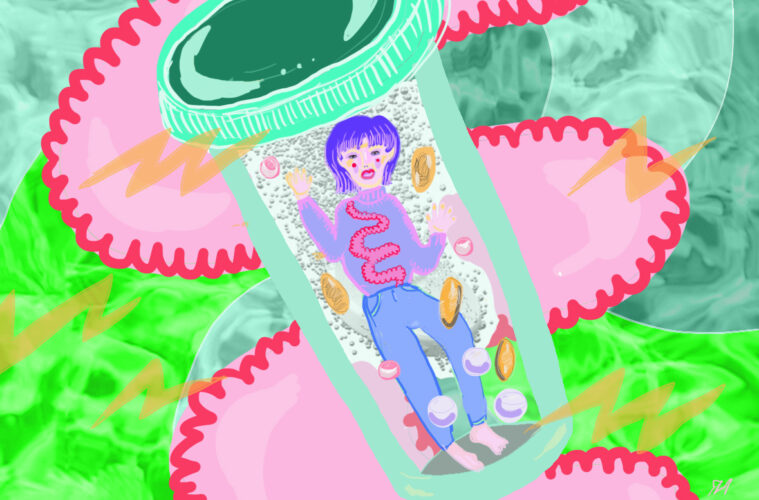 Relinquishing Control: The Unspoken Pains of Quitting the Pill

What happens to our bodies when we come off the contraceptive pill, and why is there so little information to help women through the process? Emily Stronach Walker discusses the physical and psychological side-effects of quitting the Pill, and how her own experience left her feeling isolated and frustrated by the contradictory, minimal guidance she found.

When I began taking the oral contraceptive pill, it came with a worst-case scenario leaflet on what to expect when you don’t want to be expecting. I first went on the Pill when I was 16 in order to clear my acne. I stayed on it for eight years, mostly because I met my boyfriend, now my husband, and it seemed like the most straightforward contraceptive. The initial Pill consultation involved listening to a doctor instil the fear of God into me by listing the medication’s possible side effects. The Pill may cause weight gain, mood swings, nausea, headaches, reduced libido, depression, anxiety or in very rare cases, blood clots. Not to worry though, that was just part of the process, according to the doctor.

Now, I have made the radical decision to come off the Pill, so all these side effects should just go away, right? To the surprise of no one, there isn’t an official doctor’s consultation, a pamphlet or even a webpage dedicated to coming off the Pill. It was something I would have to adapt to and learn about as I went along.

Why would someone come off the pill?

Between the years 2017-2018, over three million people were prescribed the Pill by their doctors in the UK. It is the most popular form of contraception, with significantly higher proportions of women (including gender-neutral, non-binary people and anyone using female contraception) choosing this user-dependent method over other Long-Acting Reversible Contraceptives (LARCs) such as an IUD or the implant. The Pill appeals to users because it does not involve an invasive procedure and it can easily be stopped or started at any time. Stopping the Pill is evidently something which affects (and will affect in future) a significant number of people.

People decide to come off the Pill for many reasons, from wanting to start a family to experimenting with other forms of contraception.

Notably, research has indicated that those taking the Pill have an increased chance of developing mental health issues, with many users supporting these claims and citing them as the main reason they quit this contraceptive method.

Back in February, I went for a check-up at my doctor’s surgery and told him that my husband and I wanted to try for a baby. I was coming off the Pill in a few months, so would not need a repeat prescription. “Okay”, he said, “you should finish the next few packets, your cycle might be irregular for a month or two, but you should be able to get pregnant straight away.” Nothing else, no discussions of possible side effects, no mention of mood fluctuations, no ominous warnings about the unknown, scored to creepy music…

I was initially excited to come off the Pill. I had found a job after a period of unemployment, I could finally afford private therapy for my anxiety disorder, and I was intrigued to see how quitting the Pill might affect my mental health. I could cancel the seven o’clock daily alarm on my phone entitled TAKE PILL, and the back-up one scheduled for ten minutes later which included stronger wording. This was an exciting time. A new baby! Maybe? Another minefield of conversations I wasn’t prepared for.

The reality is, when you come off the Pill, you relinquish control. Naively, I interpreted this to mean I was only losing control of my fertility, something I was happy to give up in order to get pregnant. When you come off the Pill, you relinquish the control of your timeline. You have become a countdown, a page to check on Instagram for ultrasound photos. You’re on bump-watch. ‘I have been off the Pill for X-amount of months’ has become my method of marking time and success, or lack thereof.

Coming off the Pill means, mostly, you relinquish control of your hormones. In my case, I felt as though I had poisoned mine, taken a bite of the apple from the fertility tree and inadvertently infected myself.

Then the acne crept back. At first, they were small, irritating whiteheads, which quickly developed into large, painful cysts forming a mountain range along my cheeks, jaw and neck – so much worse than my teenage acne, the embarrassment I felt in school now flooding back into my life. Obviously, the choice of an acne-beating drug-like Roaccutane was off the table – the risk of miscarriage and foetal abnormalities saw me quickly backing away from the search engine.

My other side effects of quitting the Pill included crippling period pain, bloating, increased facial hair, my libido worsening and my bowels seizing up, which led to an unpleasant trip to the doctors and being put on medication (I will spare you the details).

The worst change was to my mood. With no trace of hyperbole, I felt as though I was going insane. I became jumpy and paranoid, to the point where one week I was convinced there was someone living in our apartment with us. After six months of therapy, which made me feel as though I could manage my anxiety for the first time in a decade, I felt myself regressing. I had panic attacks randomly, I cried sporadically without triggers, I would book a day off work and spend the entirety of it unable to get out of bed. The difference this time, compared to my anxiety previously, was that it didn’t feel like me. I felt outside of myself, watching as I became a hostage to my fear.

Is it just me?

I spent hours Googling, attempting to understand this. The first webpage result for ‘coming off the Pill’ is mostly unhelpful. There are a couple of healthcare pages which either parrot my doctor’s brief advice on period irregularity or provide vague, hypothetical scenarios of what might happen (one article wrote, ‘you may become pregnant’… thank you Captain Obvious). The rest are opinion pieces of individual anecdotes by women and former Pill-users. There is no support-website, no pamphlet, nothing, that could help with the issues I was facing, or even go so far to suggest who to contact for advice.

When it came to the science behind these changes, I found glaring contradictions. One webpage told me that it is a myth for synthetic hormones to build up, and the hormones would clear from my system immediately. Was I imagining all of this? Another source claimed that actually stopping the Pill would create its own hormonal imbalance. One website pointed to research that suggested being on the Pill for four to five years actually made you more fertile. Another website argued the opposite, that long-term usage of the Pill can lead to a depletion of vitamins that are vital for fertility. Desperate for concrete answers, I moved on to medical journals but was left feeling baffled by the impenetrable, scientific jargon.

The most frustrating part was reading that these side effects I may, or may not, be experiencing were very normal and part of the process. Female pain is normalised to a point where just getting on with it is the advice distributed by a huge proportion of information sources.

After speaking to my best friend and anonymous people on a fertility forum, I was reassured to find I wasn’t just imagining all of this. I read their stories of frustration and pain, but ones ultimately with no resolution except ‘keep trying to get pregnant, a lot of my symptoms went away once I did.’ That’s fine if you can get pregnant after a month of trying, but less than ideal for those who quit the Pill without the intention of producing a baby.

I have now replaced the daily Pill for folic acid, invested in ovulation tests and downloaded an app which tells me the consistency of my cervical mucus on any given day. How glamorous. Seven months since coming off the Pill, I do think my symptoms are beginning to settle down. I have spent a lot of time reading painful, anxiety-ridden stories of fertility, pregnancy, birth and postpartum.

Perhaps quitting contraception is a part of the pregnancy timeline that needs more attention. Or perhaps we should not be content with allowing female pain to merely become part of the process, to be seen as so banal that it is not worth dedicating the extra time to understanding it better.

On a basic level, that may involve the creation of an information source specifically for those coming off the Pill, with expert-approved guidance and support. This might prevent us from feeling so lost when we decide to relinquish control – when we choose to embark on that first Google search for what to expect when quitting the Pill. Surely, we deserve better than what we have now?

Written by Emily Stronach Walker.
Emily is a writer originally from York and is now based in Wakefield, UK. She is studying a Creative Writing Masters part-time and has previously been published in Ellipsis Zine and Clover & White. She frequently contributes to her blog and can be found watching video game playthroughs on YouTube because she’s too lazy to play them herself.