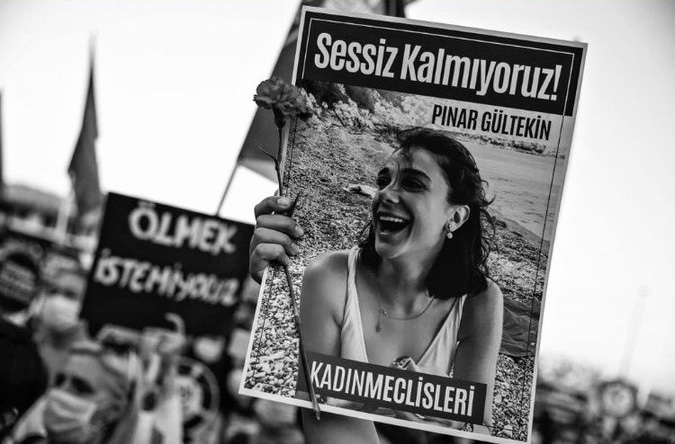 #ChallengeAccepted. The “Challenge” is Being A Woman in Turkey

What does this “challenge” mean? It meant that Pınar was not the first and will not be the last woman murdered this way, but that this needs to change. Making a reference to the black and white photographs of women killed by men that are shown every day in the news, this challenge has turned into a widespread social media challenge, raising the awareness that any woman could be the next victim whose photos shared in black and white. Tagging other women in those photos is meant to show that they are stronger together, that they will not sit idly by while men continue to kill women, and that they are calling on the government to implement the Istanbul Convention (Council of Europe Convention on Preventing and Combating Violence against Women and Domestic Violence).

With all its articles, the Istanbul Convention provides comprehensive legislation to protect women, as well as prevent and eliminate several kinds of violence against women. Turkey signed the Istanbul Convention in 2011. Nowadays, the government is targeting it, and withdrawal from the convention is on the agenda. The contract has been criticized on the grounds of “preparing the legal basis for homosexuality” and “breaking the Turkish family structure”. While the current conditions are not sufficient to stop violence against women, the withdrawal from the convention would make it even worse. Gender-based murder and brutal treatment against individuals who are not cisgender heterosexual men have dramatically increased day by day. Turkey has never been a paradise for women; however, within 12 years, femicide has increased more than 5.5 times. According to the We Will Stop Femicide Platform (Kadın Cinayetlerini Durduracağız Platformu), in the last two years, men killed 914 women. In 2018 alone, 317 women were subjected to sexual violence. Government officials’ statements targeting women have contributed to the severity of the situation for women in Turkey.

Women are mostly killed by men who were their partner/husband, ex-partner, or family member. When women who are victims of violence demand the protection of the state, the measures remain inadequate. Even police officers could give the address of a woman staying at a state shelter to her ex-husband. Men engaged in stalking, threatening, harassing, and conducting sexual and physical violence against women continue to do so without receiving necessary punishments, which enables the repetition of violence. This system gives them the confidence to repeatedly commit acts of violence against women with no repercussions.

The measures are so insufficient that sometimes women try to draw attention to violence they are facing from a man via social media channels such as Twitter and Instagram, to raise public awareness and mobilize the state institutions against her harasser/stalker/abuser/possible future murderer. It is quite regular to see women tweeting, “will you hear my voice after I die?”, waiting for proper responses from the state.

Sometimes this strategy relatively works by raising public attention through the use of social media hashtags. However, the measures should be proper, systematic, and comprehensive, protecting every woman facing abuse, in order to prevent this violence from happening. Therefore, the proper implication of the Istanbul Convention is essential for the women and the LGBT community to keep them alive and secondly, empower them socially, economically, and politically.

Besides the demand for the implementation of the Istanbul Convention, We Will Stop Femicide Platform in Turkey requests five democratic demands to be followed by the government in the pursuit of gender equality. 1) Instead of remaining silent, the president, top government officials, and the leaders of all political parties should condemn violence against women. 2) The government should effectively implement the Law on the Prevention of Violence Against Women (No.6284). 3) The parliament should adopt the law proposal submitted by the platform on the abolition of all kinds of remission for murderers. 4) A new ministry called the Ministry of Women is required. 5) The constitution should prioritize equality of gender and sexual orientations. The platform has been struggling for a long time for these demands to be met.

No matter to what extent, patriarchy persists everywhere. Withdrawal from the Istanbul Convention is also currently being discussed in Poland. Like in Turkey, thousands of people are protesting it. International and domestic solidarity among people in favour of the Istanbul Convention will determine the future of both countries. Even though Turkey is not a democracy, democratic demands highly supported by the public still have a chance to be met in the ongoing struggle for justice and equality.

Written by Ecem Lara Çamur.
Ecem studied her bachelor degree in Turkey at İstanbul Bilgi University. She double majored in International Relations and Sociology and recently finished her MA in Political Science at Central European University. She is interested in authoritarianism and authoritarian survival strategies in hybrid regimes.