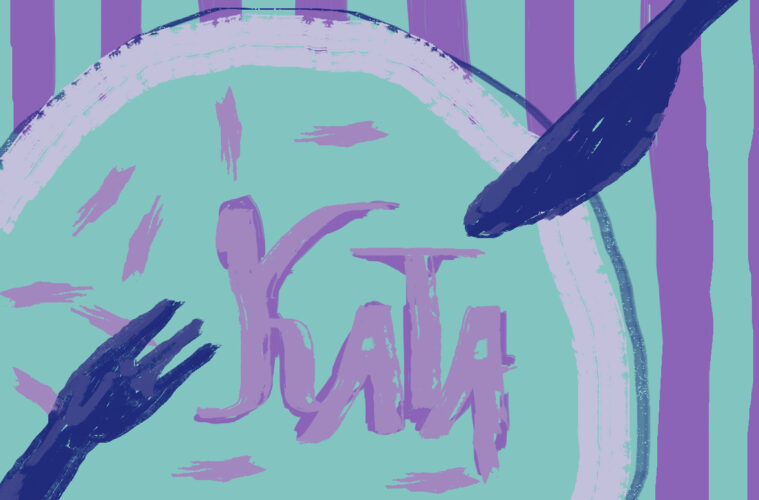 'KATA is on the menu' by Franciska Panda.

On July 11th, more than 300.000 Hungarian small business owners and freelancers woke up to the news that the popular “KATA” taxation system will undergo major structural changes in the middle of a tax season – in less than 50 days.

When I saw the news, it was around 10 am and I was just starting to get the hang of the day. I was putting my bread slices into the toaster while scrolling through the news. When I saw the headlines I went numb: I simply couldn’t believe it. Quickly read and reread through the short paragraphs while my toast was getting colder and colder.

“KATA” is a simplified form of taxation for self-employed entrepreneurs in Hungary. Subjects pay a small, fixed monthly fee and have a fair limit on their yearly income. This was a great option because the simplified taxation meant less administrative overhead, so with a bit of work, anybody could have a side hustle even without consulting and paying an accountant.

Among other changes, the most important one is that KATA subjects will only be eligible to invoice individuals, so they can’t invoice B2B.

As an example, a plumber, starting from the 1st of September, can’t go into a beauty salon to fix their pipes. Are you a crafty person selling personalized planners? No more selling them to the office workers next door if the company is paying.

As a freelancer with 9 years of experience myself, I consider myself lucky because my business model and revenues are enough to be able to switch to a more conventional taxation form and still make a profit. But I’m in the minority.

There are more than 300.000 people affected by this change. We’re forced to make an unwanted choice about our business in less than 50 days. A significant part of us will close down. What will the others do? Raise prices by at least 25%. This is happening during a global economic crisis, when the Hungarian Forint is hitting historical inflation. This might seem odd at first.

Why the need for change, and why now?

In the last few years, the government communicated multiple times that they are not happy with the KATA system. Although it helped a lot of people to pay taxes instead of working under the radar, the monthly KATA tax fee was considered too low: both solo entrepreneurs and companies started to take advantage of it.

Companies started to contract KATA subjects as “freelancers”, but in the reality, treating them as employees became the norm in some sectors – the creative field being one of them. We could say it was a win – almost win – lose situation: the company had to pay significantly less tax after a freelancing employee, the contractor earned more but lost the opportunity to take a pension, and the government wrote off a big loss of revenue.

Therefore, making changes to the KATA system was totally reasonable, and many of us were looking forward to an improved system.

We happily participated in the survey the government issued on the topic, only to drop its tax change bomb 2 days later – giving us absolutely no say in it whatsoever.

The government’s view is that the simplified tax regime was created for hairdressers, nail salons, and service providers accommodating “everyday people”. But this change means a talented hairdresser or make-up artist can’t go to work at a fashion show as it would count as a B2B transaction. Going back to my question from the beginning: why is the Hungarian government killing small businesses?

‘KATA’ is on the go by Franciska Panda.

According to financial analysts, the reason behind making the law change now is that Hungary has to make up for its fiscal deficit and make people reenter the traditional workforce to solve the labor shortage. If for example 100.000 people leave their freelancer careers and small businesses and start looking for employment, they will bring the average monthly wage down because of the higher competition for specific positions.

This brings us back to filling up the empty pocket of the government, as employers will be paying more tax on their new employees than what they paid as freelancers before. The lowered wages and the rising fees of services provided by those remaining in self-employment will result in the cooldown of the economy – which is a way to handle economic crises.

We have to suffer today to regain momentum in a few years. If I have to be a cruelly logical being, I understand it. But I’m not.

I’m a freelancer helping fellow freelancers begin their entrepreneurial careers. I’m somebody who is happy to see a new small shop opening up on my street. I’m the cheerleader when my friends tell me about their projects. They are people with dreams and goals but on the 11th of July, they have been reduced to numbers by our leaders. I’m a number. I’m one of those almost half a million individuals.

Research conducted by Upwork – a freelancer site – states in 2021, 36% of the U.S. labor force did some kind of freelance work. Estimates say that in Europe ¼ of highly skilled digital talent worked in freelance jobs. The KATA system in Hungary meant that young freelancers had an edge and were able to monetize their knowledge in the international labor market. Anybody could start a business with a small starting budget but big hopes and dreams. On the 11th of July, the government crushed those dreams and erased the competitive advantage we had. At-home moms are closing down their small online shops and Gen Z first-time entrepreneurs feel disqualified from the “game” as most of them don’t have the funds and knowledge to start their business with a more complex and more expensive taxation system.

On the 11th of July, the Hungarian government killed the small business. And we had no say in it.

Written by Fanni Friedrich.
Fanni Friedrich is a marketing strategist and copywriter living out her suitcase as a digital nomad. She’s teaching other freelancers to scale up their business and currently has more than 34.000 friends on TikTok.