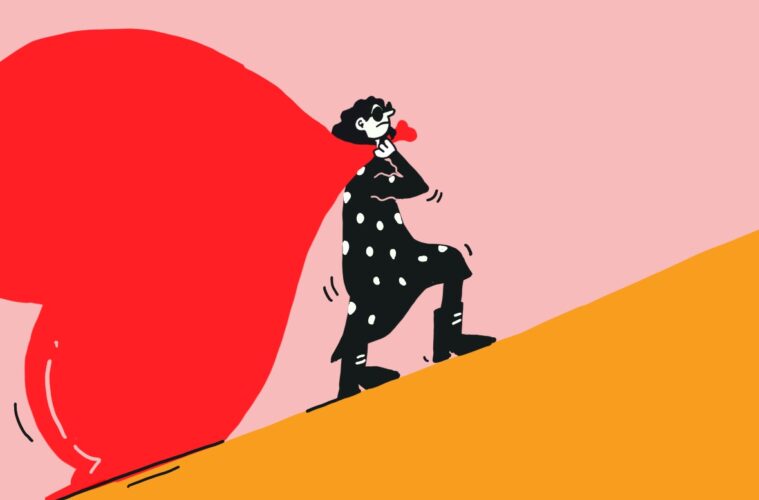 The feeling of being in love, and being loved in return – name one person who would be against it. Of course, you can certainly question the traditional frameworks associated with romantic love and coupledom, such as monogamy, having children, or marriage. But who would dare to go as far as to go against love itself?

Contemporary debates around the private sphere tend to focus on norms within the couple-structure, while the underlying idea of coupledom, that of modern love, remains largely unquestioned by today’s society. In fact, it’s only intensified by popular culture; be it songs or movies, from an early age on they teach you to wait for the butterflies, the irrational, magical, and often challenge-ridden path of falling in love.

Yet our quest for the supernatural, for “true” love, must be carried out in a hyper-rational, productivity-oriented society. We are fed by the image of hectic romantic obsession, but at the same time encouraged to co-exist in stable, long-lasting units. We are told to chase love-beyond-norms, but once acquired, transform it into love-within-norms, and achieve the traditional goals of marriage, children and a lifelong union.

Channelling my inner Carrie Bradshaw, I couldn’t help but wonder – can these expectations ever coexist? Do these notions of love do us any good, or push us towards never-ending dissatisfaction?

Songs and movies are obsessed with no-rules-apply situations, where the norms of stability are overthrown by love-beyond-norms. Typical romcoms depict either the beginning of a relationship or bring drama into a long-term partnership (usually depicted as the “boring marriage”) by introducing a third person (cheater, polygamy, you name it).

The point is, we are rarely told stories when the magic fades out, and where drama doesn’t involve cheating, disappearing or killing each other. Perhaps that would make for a boring movie. But would it make for a boring life?

While we keep chasing that pounding heartbeat, our societal norms are still built around long-term monogamous partnerships, stability and uneventful private life with pre-determined milestones (dog, marriage, baby, preferably in this order). And surely, these goals cannot be achieved on a whim: they emerge with commitment, stability and compromise – the enemies of spontaneous “fun”, intrinsically linked to the idea of love-beyond-norms.

In contrast, then, love-within-norms is often seen as something rather boring, only occasionally mixed up by big fights, lies and secrets. And the vocabulary we use to describe long-term love doesn’t help either.

The language of domesticity conceptualises long-term love in the terms of hard work, featuring our all-time favourite expressions, such as “love takes work”, “it’s all about the ability to compromise”, “the need for transparency and communication” and so on – ultimately less glamorous than the irrational, unpredictable and frankly quite hot scenario of push-and-pull desire.

Really then, long-term love takes on the language of productivity, argues feminist scholar Laura Kipnis in her book Against Love: A Polemic. A “successful” relationship is conceived as a result of constant and conscious effort: organising date nights, making time for quality time, scheduling trips, or spicing things up (strictly planned in advance). These kinds of things are what Kipnis calls “capital investment in relationship continuation”.

Kipnis dares to compare the ideals of modern domesticity to Foucauldian invisible power: by assigning ourselves a partner, we independently sign up for an all-encompassing source of accountability and regulation, that dictates almost every aspect of our private behaviour (as I write this, the familiar “Will be at home by 8!” text pops up on my phone).

The pressuring force of stability

But why would then so many of us sign up for voluntary regulation, policing your every action? Well, the truth is, stability, and forms of love-within-norms that come with it, such as domesticity, affection, and the realness of another person are also powerful, even addictive forces. Chances are that those in a long relationship find it incredibly hard to imagine being completely on their own and not being touched by another human being for a sustained period of time.

The problem is, being in a stable relationship, as its name says it too, is not only inherently addictive but happens to conform with societal standards. It is the unit that society builds its functioning on, one that provides a stable structure for production, reproduction as well as consumption.

It is not surprising then, that as a young woman navigating this messy world, being in a “successful relationship” feels like an internalised pressuring force, guiding your every action. That harmless-sounding question that all family members and friends are so keen to ask, of “how [insert your partner’s name] doing” is sometimes not-so-harmless. Smiling politely, I wonder, since when the wellbeing of a relationship has come to mean more than the wellbeing of one’s self?

As someone who entered the world of couples relatively late (at least later than me and my girlfriends would have thought in high school), the status of being in a relationship feels like really having it all together. Conditioned from a young age to crave being loved and to provide affection in return, I have often found it difficult to separate my feelings for a partner from the mere societal reward one gets for being in any long-term relationship, thus conforming to love-within-norms.

Such pressure, in my opinion, is particularly hard to face, especially when contrasting it with the pop-culture ideals of pitch-perfect couples, secret romances, or unrequited, intense and difficult (most often actually pretty harmful and toxic) love-beyond-norms situations.

Should we be against love, then?

Kipnis writes, “thus you have the psychological signature of the modern self: defined by love and an empty vessel without it”. The problem isn’t that we crave love, but that we are so pathetically defined by it.

So no, I don’t think that anyone should be “against” love. Yet questioning the emphasis we collectively put on it, the way in which we measure one’s worth of whether they have found either notion of love, can only bring forward a less dogmatic and expectation-ridden society.

Only when we free ourselves from such external pressure, we will be able to decide how much of love beyond and within-norms we actually need from another person. As we – especially women – familiarise ourselves with more than one way [the love-way] of self-realisation, the need to untangle the paradoxical nature of love will become less urgent, and the norms around relationships more flexible.

In a way then, I do encourage everyone to challenge love, in order to be able to experience it without the pressures surrounding it. Now that’s what I call real.

If interested in having your say in this topic too, submit your own piece of writing for our ‘Challenging Love’ content call. For more details, click on this link.

Female friendship in literature: an analysis of “My Brilliant Friend”

Is this a Compliment? A video essay

Of Wine and Women: Magic Through the Looking-Glass with Christina Rassmussen